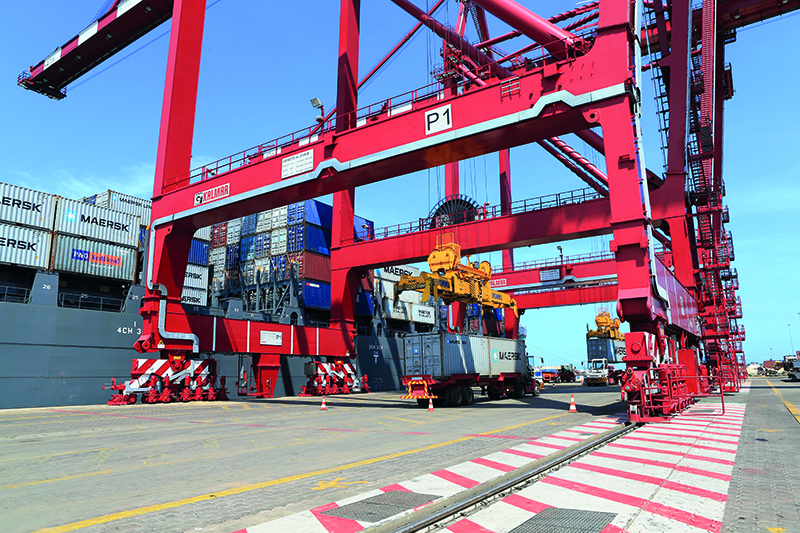 International conglomerate Bolloré Africa Logistics has big plans for Congo Terminal, a shipping container terminal located on the coast of Pointe-Noire, the second largest city in the Republic of the Congo and the busiest commercial center in the country.

Since Bolloré Africa Logistics acquired Congo Terminal in 2009, by inking a 27-year concession agreement with the government, the global transport and integrated logistics network has sunk more than 200 million euros into developing its infrastructure with plans to turn it into a state-of-the-art cargo hub that would rival any of the world’s busiest international container terminals.

By capitalizing on its strategic location, Bolloré expects to turn Congo Terminal into a premier transcontinental shipping center and international gateway to Central Africa.

The Congo Terminal recently celebrated its five-year anniversary with an employee work force that has grown from 135 members in 2009 to 687 full-time staff today. Director General, Michel Antonelli, was on hand for a gala dinner event and used the occasion to take stock of the company’s achievements.

Phase one of the terminal’s expansion saw the addition of 270 meters of wharf space, and the renovation of storage areas to accommodate soaring volumes. Container capacity has climbed from an original 13,000 to 630,000 units last year, 700,000 containers this year, and volume is projected to grow to 800,000 units next year.

Mr. Antonelli notes that while significant strides have been made the business still has more to do to meet its objective of 1 million container units by 2017. Millions more will be spent to expand the wharf to 1,500 meters with an eye on raising container traffic to 1,203,000 units by 2036.

To meet its goal of becoming the transshipping fulcrum for Central Africa, management has implemented what it calls its QHSE (Qualité, Hygiene, Securité & Environnement) policy, which incorporates principles of quality, safety, and health for its employees, customers and the environment.

“I am personally committed to providing the necessary means for the implementation of this policy, and to periodically check its application and effectiveness during management reviews,” says Mr. Antonelli.

Management has instituted mandatory training and educational programs and imposed safety standards for every facet of its operations to ensure the protection of its workers and the environment. Dedication to the policy is marked by the same kind of ambitious figures usually assigned to productivity, the company is aiming for  “0” accidents, “0” incidents and “0” pollution.

Congo Terminal has undergone an organizational overhaul to improve services and efficiency. Now the port boasts several new facilities including a maintenance workshop dedicated to the management and troubleshooting of heavy equipment and vehicles. The sprawling facility covering an area of 10,000 square meters includes a full service station, dedicated stations for mechanic and electrical repair and maintenance, administrative offices and parking.

Another feature of Congo Terminal’s is the logistics zone, the heart of the operation where all the heavy lifting is done, an area where containers are delivered, loaded and unloaded, and goods transported to outlying regions. To improve the efficiency of the day-to-day activity, the company has employed OSCAR, a modern tracking system that allows the terminal’s operators to interface with ship owners, and customs agents to track and handle every container that comes into the terminal with pinpoint accuracy.

OSCAR’s full service logistics program is designed to support every aspect of cargo handling. From giving instructions to a ship owner to tracking and managing containers to generating invoices, OSCAR is the terminal’s virtual one-stop-shopping logistics coordinator.

Investment in Congo Terminal goes beyond the infrastructure; the leaders of Bolloré Africa Logistics are looking to develop its workforce by partnering with four technical and vocational schools. Agreements with the schools, signed in August of 2014, will provide improved vocational training and integration to students. The initiative by Bolloré is one that the government hopes other corporations will follow.

“Our corporate responsibility is to foster talent by training and offering employment opportunities to students,” says Mr. Antonelli. “That’s why it was important to reinforce this cooperation with a formal partnership.”

Another way Congo Terminal is hoping to ensure successful growth is by actively addressing community concerns. Working with the Calissa Ikama Foundation to combat childhood cancer, Congo Terminal will finance a hotline that will serve to dispense information regarding support and services to those affected by the disease. According to the foundation’s data, the mortality rate among children stricken by cancer in the Congo is as high as 99% compared to 1% in Canada.

Congo Terminal has also been working with the Association to Stop AIDS, by participating in the construction of a home for the children of Pointe-Noire orphaned by AIDS. Since 1992 the association has provided assistance to 600 children who have lost their parents to the dreaded disease.

“We strive to go beyond superficial donations,” highlights Mr. Antonelli. “We aim to have  solid involvement in our social activities by collaborating closely with our partners and beneficiaries.”