UK-Qatar ties at their strongest in finance

London and Doha not only share the title of major global financial centres, but also significant two-way trade and investment links that seem to only grow stronger with time 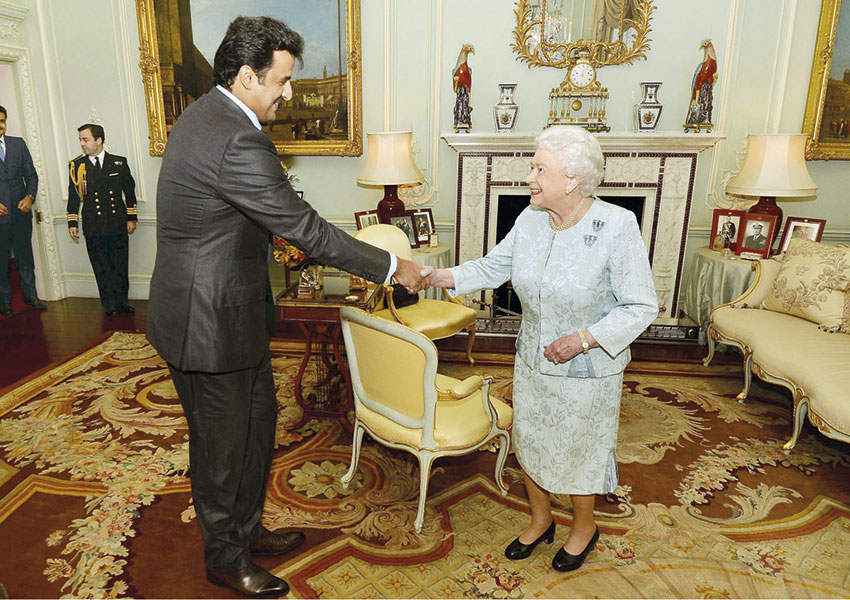 IN OCTOBER 2014, HIS HIGHNESS THE EMIR SHEIKH TAMIM BIN HAMAD AL-THANI MADE HIS FIRST OFFICIAL VISIT TO THE UK, SINCE TAKING THE THRONE IN 2013
SHARE

Speaking at a conference in London in July 2014, Director of Trade and Investment at the British Embassy Doha, Gareth O’Brien, summed up Qatar’s importance to bilateral financial cooperation in a few simple words: “Qatar matters more and more to the UK.”

Bilateral trade and investment between the two nations stands at some £5 billion per year and the Qatar Investment Authority (QIA) has become heavily involved in the UK’s National Infrastructure Plan. This is particularly evident in the Canary Wharf financial centre, which the QIA made a successful offer to buy in tandem with Brookfield Properties in January for £2.6 billion, adding to the sovereign wealth fund’s impressive portfolio of interests that include The Shard, Harrods and Heathrow Airport. Overall, the Qatar government has pumped £30 billion into the UK and a further £10 billion has been earmarked for UK infrastructure projects.

When asked why Qatar has so strongly targeted Britain, Adel Mustafawi, Group CEO of Masraf Al Rayan Bank – the UK’s largest Islamic finance institution with branches in London, Birmingham, Manchester and Leicester – underscores that as a global investor “Qatar seeks investment opportunities in different markets and sectors. We cannot ignore the fact that London is the second largest financial market globally after New York. The legal and regulatory environment in the UK is very sound.”

CEO of Qatar Islamic Insurance Company agrees, saying: “The UK is the financial hub of Europe that has traditionally offered a comparatively less volatile operating environment with promising opportunities for foreign investors. Same goes for Qatar being stable in a highly unstable region; so many opportunities for rapid growth attract many UK companies to Qatar. We consider this as a winning partnership for both the countries.”

Indeed, Qatar is UK’s third largest export market in the Middle East and North Africa region at £2 billion annually. With the 2022 World Cup on the horizon, trade links between the two countries are set to increase even more as the home of football joins forces with the first Middle Eastern nation to be selected to put on the greatest sporting event in the world. As Mr O’Brien noted, “six new stadiums and 70 training grounds are under construction.” According to MEED Projects, Qatar’s active projects market has been estimated at USD 285 billion. Little wonder that UK Trade and Investment has given Qatar pride of place on its High Value Opportunities Programme.

Opportunities also exists in rail and roads infrastructure, and a delegation from Qatar Rail visited the UK in the autumn to explore potential cooperation in the planned construction of a rail network linking Qatar to the rest the GCC – a project worth $35 billion to investors – and the creation of the Doha Metro system which is already underway. On the other side of the coin, the QIA has backed infrastructure development in the UK ranging from energy plants and rail links to the Thames sewer project.

Meanwhile, the British expatriate population in Qatar has grown from around 1,500 people in 1995 to over 20,000 today on the back of an increasing presence of UK companies and an influx of technical experts to cooperate on the vast infrastructure undertaking Qatar has embarked on. As Abdulla Al Raisi, CEO of Commercial Bank of Qatar, notes: “It’s a historical thing. We were colonised by the British and we did enjoy a good relationship; we as companies believe that the British brought a different civilisation and mixed it in with us in a harmonic way and we were not so much resistant or defensive, rather we have accepted it. But we maintain our identity, that is very important, and we have learned a lot from them in terms of developments in oil and gas and education. The UK has played a very important role in the education sector in our country and people have the opportunity to be trained abroad in England.”

“Qatar has started investing,” he continues, “because it is part of our project to expand our economy and investments and share views and ideas. A lot of students are going there and are benefiting from the quality of the education and the experience. They have had a very long history in development and now we are actually importing this technology and other aspects.”

The relationship is further illustrated through the establishment of Qatari banks in Britain’s capital. QNB has been present in London since 1976 (its first footprint in Europe), and recently the bank formerly known as Islamic Bank of Britain re-branded under the auspices of Masraf Al Rayan to become Al Rayan Bank, offering shariah compliant products and services. And it works both ways; HSBC has been in Doha since 1954 and continues to connect Qatar to its global financial network.

Masrah Al Rayan’s Mr Mustafawi echoes these sentiments. “The Qatari market offers many investment and partnership opportunities for UK investors. With the multi-billion dollar infrastructure investments planned over the coming decades, different sectors that directly or indirectly feed into these projects will be the largest beneficiaries. With the expansion and development of the port and economic zones, we expect significant investments in trade and industrial/manufacturing projects in Qatar. In addition, the utilities, healthcare and education sectors offer excellent opportunities as the population in the country grows and the government allocates more resources towards these sectors.”