Following on from last year’s declaration of intent, the Saudi Capital Market Authority (CMA) has now formally announced that the
$560 billion Saudi Arabian stock market will open its doors to qualified foreign institutions in June. The stock market (Tadawul) is one of the largest Emerging Markets with strong technicals and valuations that are likely to re-rate higher over several stages, particularly when the market is included in the main benchmark indices, writes John Sfakianakis, Managing Director of Ashmore Group, Saudi Arabia 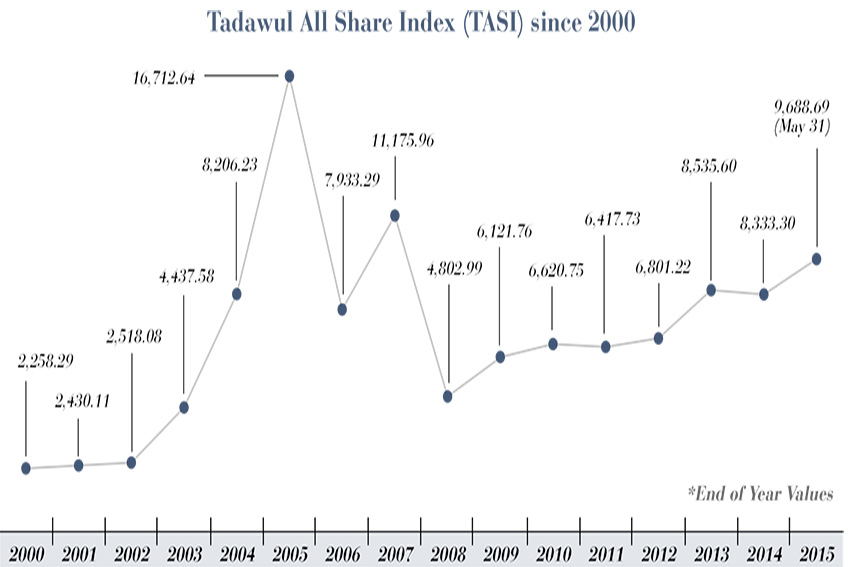 Saudi Arabia is a very large, liquid market. It will potentially be the seventh largest Emerging Markets (EM) equity market by market capitalisation, just behind South Africa ($543 billion), and ahead of Russia, Malaysia, Mexico and Indonesia. The Saudi Tadawul Exchange trades on average $2.4 billion per day across more than 165 listed companies and offers a rich selection of opportunities ranging from banks to consumer-driven businesses.

The opening of the Saudi market will widen the foreign investor base, which is currently around 1.6 per cent of total holdings. Given the size and depth of the market, we expect Saudi Arabia to be included in the main EM equity benchmark indices by 2017, though this requires the authorities to further lift restrictions on access to the market. Should this happen, more than $20 billion could flow into Saudi Arabia over the next few years.

Judging by other precedents in the region, such as Morocco, Egypt, UAE and Qatar, Saudi Arabia’s market is likely to re-rate when it becomes included in EM indices. Indeed, we see analogies to the opening of the Indian market for foreign equity investors and the ongoing opening of the onshore Chinese stock markets.

Saudi Arabia’s decision to open its markets now is highly intelligent – global financial conditions are bound to become tighter in the coming years and the winners among EM countries will be those that are able to maintain or increase their share of a shrinking global ‘financial pie’.

From a fundamental perspective, the opportunity in Saudi Arabia is exciting. Contrary to popular perceptions, Saudi Arabia’s stock market is not just about oil. In fact, not a single oil company is listed on the Tadawul Exchange.

Banks are also attractive with the country’s peg to the US dollar making them beneficiaries of rising rates. Large parts of the stock market consist of consumer businesses, whose earnings are determined by domestic conditions.

King Salman’s affirmation of the country’s commitment to domestic spending, development and job creation creates favourable tailwinds for consumer-focused sectors, aided by the announcement recently of two extra months of salaries and bonuses. We see opportunities for consumer stocks similar to those found in some African or Asian markets, but at much more attractive multiples, because of Saudi Arabia’s very favourable demographics.

Another attractive feature of Saudi Arabia that stands to support consumption in the medium to long term is its population demographic. According to UN data, nearly 50 per cent of Saudis are less than 30 years old, with just over 3 per cent above the age of 65. While Saudi Arabia’s population is ageing, the repercussions will not be felt for several decades. The OECD projects the size of a ‘middle class’ segment to rise from 20 million today to 40 million by 2020. This should provide strong tailwinds for most forms of consumer spending, as well as justifying the enormous infrastructure roll-out that is under way.

One of the key policies announced in Saudi Arabia is the labour reform introduced since the Arab Spring. This policy is designed to encourage employment of local rather than cheaper foreign workers. While in the near term this may mean higher wage costs and resultant slower growth, this policy also creates a catalyst for growth in domestic consumption. The government has also increased minimum wages, opened doors to allow a greater number of women to enter the workforce and introduced unemployment benefits. Together these mean higher discretionary income, which is driving Saudi consumer spending growth to be amongst the highest in EM.

One of the key benefits of including Saudi Arabia in an Emerging or Frontier Markets portfolio is diversification. It is difficult to say how index providers will include this new market in their indices once it opens, nevertheless their inclusion alone will finally enable investors to have an ‘on-benchmark’ exposure to a market that has been overlooked for too long.

The market is opening at a time of unprecedented change in Saudi Arabia. King Salman, who acceded to the throne this January, has begun the shift of power to a new generation of Al-Sauds with the appointment of Prince Mohammad bin Nayef as Crown Prince and the appointment of his son Mohammad bin Salman as Deputy Crown Prince. The new King has also reshuffled the cabinet and restructured and streamlined official bodies into two committees, which are directly linked to the cabinet.

These are the Council of Political and Security Affairs and the Council of Economic and Development Affairs. Efficiency, better citizen services and corporatisation of government institutions are the motivating forces.

More changes have been implemented within the past few months than Saudi Arabia has seen for decades. Indecision and inertia have been replaced by steadfastness and dynamism.

Saudi Arabia’s gross domestic product (in current prices) stood at $752 billion in 2014. It is the largest economy in the MENA region and the only MENA economy to be represented in the Group of Twenty (G20). The central driver for the domestically focussed part of the stock market relates to the budget much more than the oil price.

Moreover, Saudi Arabia’s debt to GDP is less than 3 per cent and one of the world’s lowest. A combination of debt and reserve assets can help Saudi Arabia sustain high spending in an environment of lower oil revenues. As global EM growth continues its recovery path, we believe that oil prices are likely to continue their upward path, which should be fiscally supportive for Saudi Arabia.