Top of the class

Article - January 16, 2012
AIS offers premier grade teaching – through the English language – to pupils from a diverse range of countries 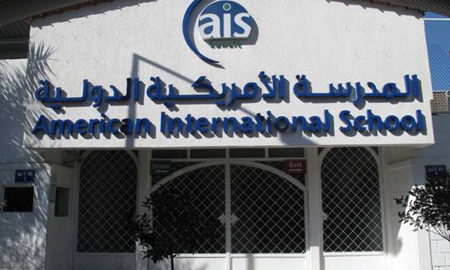 The American International School of Kuwait (AIS) is a private, independent , co-educational day school serving students from pre-kindergarten through grade twelve. English is the primary language of instruction although all students study Arabic or Arabic as a Foreign Language. It is an International Baccalaureate Organization (IBO) World School that is fully authorized for the IB Diploma (IBD), Middle Years (MYP) and Primary Years (PYP) programmes. The school is modeled on the three divisions typical of American schooling: Elementary, Middle and High School. It is accredited by the Middle States Association of Colleges and Schools. It is also a member of the Association for the Advancement of International Education (AAIE) and International School Services (ISS). Its graduates have attended prestigious English language universities around the world. In a given year, AIS graduates attend 40-50 universities worldwide.

The school opened in 1991 after Kuwait was liberated from occupying Iraqi forces. Dr. Kamil Al Rayes, the founder,sought to create a school of high caliber with a disciplined, yet relaxed atmosphere that would provide opportunities for local and ex-patriot children to gain access to the world’s best universities. During the first year twenty-five teachers and 300 students dealt with shortages of textbooks and classroom supplies, an inadequate library and a skeleton curriculum. The school developed rapidly. In October of 1994 it became fully accredited and in the ensuing years dedicated professionals worked hard to develop what has become an excellent university preparatory school with 1600 students.

Dr. Kamil Al Rayes passed away in 1995 and on the occasion of his untimely passing his daughter, Mrs. Samera Al Rayes, became the Director. She has prepared for this role by obtaining a Masters Degree in education and she is currently working on a doctoral degree through Lehigh University. She and her brothers, Dr. Samer, Col. Zaher and Dr. Badri, act as the governing Board of the school. Each of the four Board Members is involved in the operation of the school with the educational side of the organization being managed by professional staff. Although the school has grown into a large operation it sustains a very open and friendly atmosphere in which staff members have easy access to the members of the Board.

The school relocated from Surra to its present location in Salmiya, Kuwait City in 1995. The campus, sheltered by a brick wall from the wind and weather, has middle and high school buildings that open onto an interior court in the Arabic style and three elementary buildings that surround an open play area. A 1200 seat auditorium, an indoor gymnasium and a sheltered outdoor gymnasium form another part of the complex. The roof of these structures holds a third storey soccer field and running track.

Visitors frequently remark on the economical use of space. The campus is only three to four acres in area, but it contains libraries, three art rooms, two music rooms, two drama rooms, a black box theatre, computer labs and design technology rooms, and a full range of science labs. There is a separate shaded play area for kindergarten, the interior court is equipped for tennis and basketball, a large shaded open air canteen serves lunch, and there is a good size strength-training room as well as a large aerobics room adjacent to the gymnasium. All of this, in addition to sufficient classrooms to house 1600 students, makes it a very busy campus. Efficient scheduling and a strong sense of community, nevertheless, give the campus a friendly, but purposeful air.

Approximately one half of AIS students are Kuwaiti, while another twenty-five percent are Arabic first-language speakers from the Middle East. The remaining quarter is from North and South America, the United Kingdom, Northern and Central Europe, Turkey, India, Pakistan and Korea, among other nationalities.  The ethnic diversity of the student body provides a stimulating environment in which we attempt to live the IB Learner Profile. Students of all nationalities study Arabic either as a first or foreign language. This satisfies a government requirement, as well as contributes to additive bilingualism, which is a critical part of our mission. Muslim students are required by the Kuwait Ministry of Education to study religion.

THE AMERICAN INTERNATIONAL SCHOOL IS DISTINGUISHED IN EDUCATING AND NURTURING UNIQUE AND SELF-RELIANT WORLD CITIZENS.

Is served by a university preparatory school that offers American and International Baccalaureate curricula.

Enables students, from nursery through grade twelve, to achieve excellence in all aspects of their lives.

Has a dynamic atmosphere that promotes the development of critical and disciplined thinkers who are inspired by the joy of learning.

Believes that teachers are highly trained professionals who are in a position of trust and who are bound by moral and ethical obligation.

Believes that parents are the first teachers of the child, and that mothers and fathers must play an integral role within the school.

Believes that empowered students are able to excel academically in an environment that challenges all facets of their intellect.

Promotes ethical and compassionate behavior in all as we share knowledge and begin to acquire wisdom in a climate of trust and hope.

Ensures that all members of the AIS community know their rights and responsibilities and the consequences for their actions and inactions.

Encourages scholarly diligence and personal determination, and believes in the dignity of hard work and the value of play and recreation.

Seeks to develop the potential of the human mind by attending to the physical, intellectual, social and emotional development of students.

Believes the strength of character necessary for co-operation and collaboration comes from self-confidence and high self-esteem.

Celebrates cultural diversity and honors tradition in an atmosphere of equality where people from around the world learn from one another, and are able to understand one another’s ways of knowing.

The American International School is distinguished in educating and nurturing unique and self-reliant world citizens.

Andrew Atkins
100% of 1
Great to see one of the best International schools of Kuwait on an international website such as this one... Really interesting site
maryam ammar
100% of 1
Wow, i might be transferring to this school, this year. Feeling really nervous and worried. any comments if its good?