Article - May 14, 2014
Strong bilateral ties are enabling key knowledge and expertise transfer to position London at the centre of the global expansion in Islamic finance 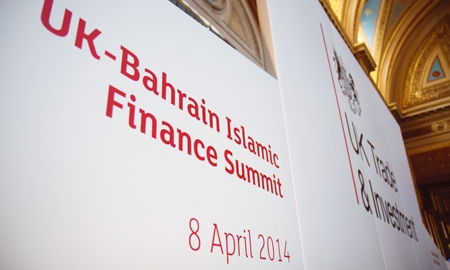 NUMEROUS HIGH-LEVEL CONFERENCES AND SUMMITS ARE STRENGTHENING LINKS IN THE FINANCIAL SECTORS OF BOTH BAHRAIN AND THE UK, PARTICULARLY IN ISLAMIC FINANCE
SHARE

With 716 financial institutions spread over 61 countries, growth rates approaching 20 per cent, and a total volume of assets expected to approach $3 trillion over the next five years, Islamic finance has only just begun to establish itself in the global financial system.

Already, crucial knowledge and expertise in this field has concentrated itself in strategic locations, with Bahrain being at the forefront of the Middle East, and the United Kingdom emerging as the premiere hub to conduct this business in the West.

Just as partnerships between London and Manama were instrumental in Bahrain’s emergence as a global financial centre decades ago, these ties have provided the relationships and the transfer of knowledge that has positioned London at the centre of the global expansion of Islamic finance.
The special role that London has played in this development is personified by the deep relations enjoyed by the United Kingdom and Bahrain.
The highly successful World Islamic Economic Forum held in London at the end of October 2013, which was attended by Crown Prince Salman bin Hamad Al Khalifa, laid the groundwork for closer bilateral cooperation in the forum’s first ever meeting in a non-Islamic city.
In December of last year, a sizeable delegation of leading finance professionals from the UK attended the World Islamic Banking Conference in Bahrain, further solidifying ties. In February, the Lord Mayor of the City of London, Fiona Woolf, paid an official visit to Bahrain. Ms Woolf is not only the second woman to be a Lord Mayor in the 824-year history of the post, but also spent three years working in Bahrain in the 1980s with Baker Mackenzie.
Also in 2013, the UK established the first ever ministerial-led Islamic Finance Task Force, jointly chaired by Financial Secretary to the Treasury Greg Clark and Baroness Sayeeda Warsi, Senior Minister of State at the Foreign and Commonwealth Office.
Meanwhile, Prime Minister David Cameron has expressed his desire to support “the UK’s position as a global partner of choice for Islamic finance with the expertise, innovation and services fundamental to the industry’s growth.”
Typical of the interconnectedness between the two countries, Standard Chartered Bank, a British bank with nearly a century of history in Bahrain, has risen to become a major player in the Islamic banking sector.
Standard Chartered Bank first came to Bahrain 90 years ago and helped lay the foundation for the thriving finance sector that exists there today. It was one of the country’s first financial institutions and helped to create the Monetary Authority, which later became the Central Bank of Bahrain.
“There are very few partnerships between governments that are as good as the UK and Bahrain,” says Hassan Jarrar, CEO of Standard Chartered Bank in Bahrain. “They go back 200 years. To be part of that it is a huge privilege.”
Longstanding ties like these have helped put the UK at the forefront of Islamic finance. Today, more than 22 international financial institutions operating in the UK offer Islamic finance products. Six of these are fully Sharia-compliant banks, more than any other country in Europe.
Islamic finance has already been used to fund several major developments in the UK, including Harrod’s department store, The Shard skyscraper, the 2012 Olympic Village and the redevelopments of Chelsea Barracks and Battersea Power Station.

More than 30 law firms with offices in the UK offer expertise in legal services relating to Islamic finance for domestic and international markets, and it is now common practise among the UK’s largest accountants, consultants and professional service firms to have Islamic finance departments.
Islamic finance will be increasingly relevant as British businesses seek to connect with the so-called rapid-growth markets that are expected to drive an increasing share of growth in the global economy.
British banks have a hand in opening up the quickly evolving international sukuk, or Islamic bond, market in the West. A total of $34 billion has been raised through 49 issues of sukuk on the London Stock Exchange so far, strengthening the UK’s position in a $100-billion per year worldwide market that is expected to see a 30 per cent expansion in 2014, according to a forecast by Thomson Reuters.
As the world of Islamic finance gains more and more ground, market studies have cited the need for training and education programmes to provide finance professionals with the necessary background. The UK has led the way in this area as well. At least four professional institutes and 10 universities and business schools across the country now offer new standards and qualifications in Islamic finance.
Years of doing business has developed familiarity and trust between key market players in the two countries, positioning the UK financial services sector as a springboard for global growth and the partner of choice in the delivery of Islamic finance excellence in the Western world.
“We are not just now trying to obtain licences in London. We have been doing business there. The regulators know us inside and out,” says Khaled Kawan, CEO of the Arab Banking Corporation (ABC). “They take enormous comfort from the fact that we are regulated by a decent regulator. The Prudential Regulation Authority has the highest regards for the Central Bank of Bahrain.”