As the global Islamic finance industry continues to experience double-digit growth in the coming years, Saudi Arabia will lead the way. The kingdom is home to the world’s largest Islamic banking market, which doubled in size between 2009 and 2013 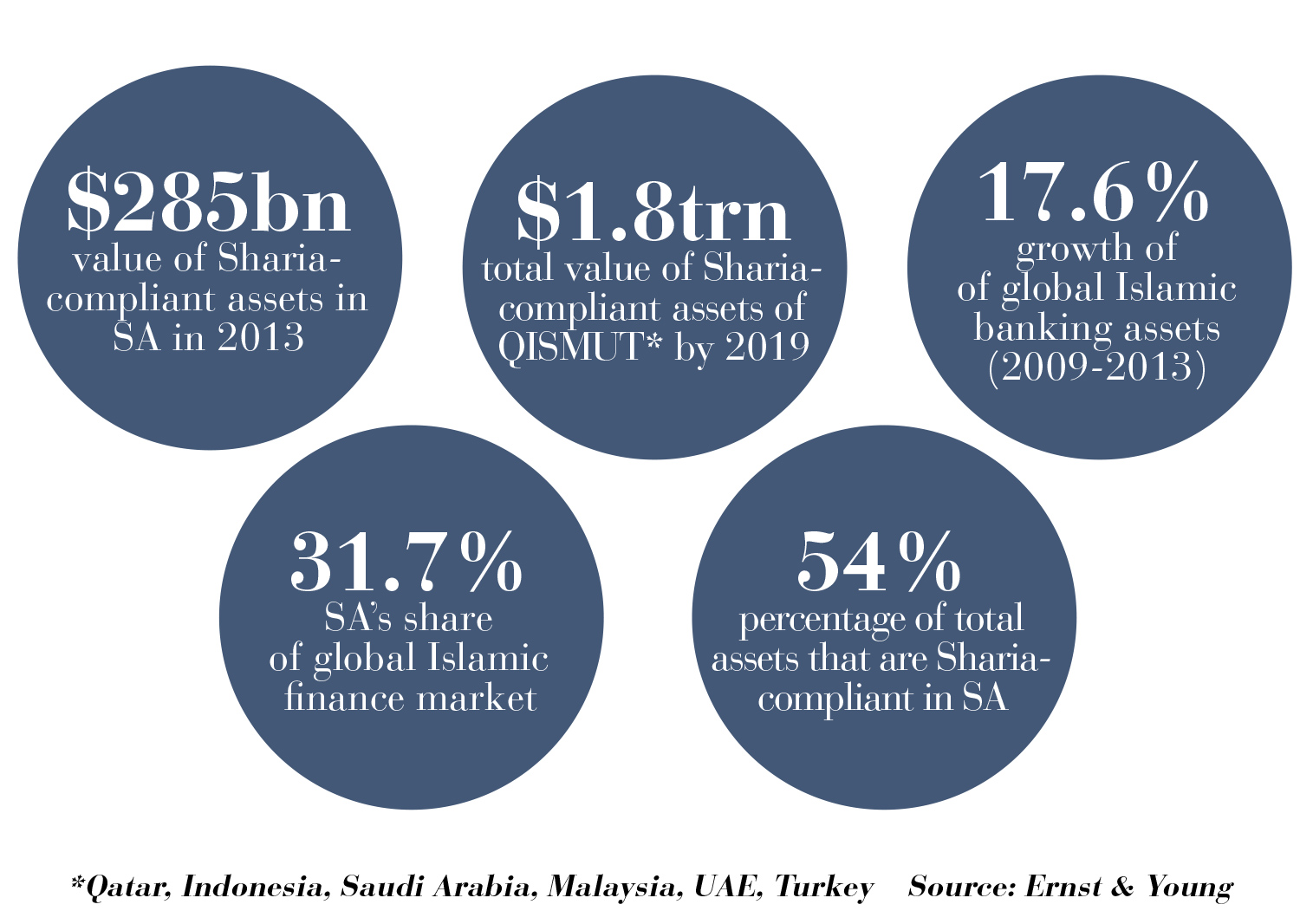 Saudi Arabia’s banking sector has enjoyed considerable growth over recent years and the expansion of companies observing Islamic principles looks set to power continued prosperity for its financial sector.
The principles behind the practice set out how banks can operate and revolve around the notion that returns from financing are determined by ownership and shared profit and loss.

It is a considerable difference compared to many of the financial practices of Western institutions, with the overarching principle meaning that interest cannot be applied to loans. Excessive financial speculation is also avoided as is investing in sectors that are forbidden by Islam, and the principles have provided a framework that has proven remarkably successful during the global banking crises over the past eight years.

Although the practice of banking according to Sharia principles is many centuries old, it has risen to prominence over the past decade and Saudi banks have become leaders in the industry. The sector is booming and while only around 1 per cent of global assets are estimated to be represented by companies adhering to such principles, it is the rate of growth in this sector that is catching the attention of both Islamic and secular investors.

Between 2009 and 2013, global investment analysts Ernst & Young said the Islamic banking sector had grown by nearly 18 per cent on an annual basis, with that rising to nearly 20 per cent by 2018. Given such predictions and the fact that around $2 trillion worth of assets were estimated to be Sharia compliant in 2014, it’s unsurprising that Saudi-based banks are leaders in the field.

The kingdom is home to the world’s largest Islamic banking market, which doubled in size between 2009 and 2013. Ernst & Young predicts that by 2019 total Sharia-compliant assets in Saudi will reach $683 billion, which will account for more than one third of the total Islamic banking assets of the six core markets of Qatar, Indonesia, Saudi, Malaysia, UAE, and Turkey (QISMUT).

Companies practicing within the field include the likes of Al Rajhi Bank, Bank Albilad and Bank Aljazira and its investment arm Aljazira Capital, as well as the country’s oldest financial institution the National Commercial Bank (NCB), which recorded the largest listing in the Arab world’s history last year.

NCB offers an array of Sharia-compliant financial services and the company’s investment arm, NCB Capital, is also one of Saudi Arabia’s leading Islamic banking specialists and a global leader in Islamic Mutual Funds.
“Our mutual funds business was built slowly over many years,” explains Sarah Jammaz Al Suhaimi, Chief Executive Officer at NCB Capital. “We continued to invest in our people and our systems and processes, through bull markets and bear ones.”

Such experience is now proving hugely beneficial not just to NCB but also to Saudi Arabia’s wider financial sector. The growth in Islamic banking is expected to drive wider expansion in the industry and the ethical notions that underpin the approach are being seen as an increasingly attractive proposition for both those wishing to bank according to Islamic teachings but also investors seeking more sustainable returns.

A key aspect of Saudi Arabia’s Islamic banking sector is the lack of highly leveraged products, which delivers not just reduced risk but also a more stable environment for competing firms in the region. Once profitability has been established, volatility can be lower and it is this that has helped power a widespread surge in demand for products and services from the sector. Such factors have also insulated Saudi Arabia, and the region in general, against the excesses that were apparent in many Western financial institutions over the past decade and enabled it to gain a foothold in the financial world as markets in other regions of the world suffered.

Calls for further deregulation of Saudi Arabia’s banking sector is also likely to enable increased growth as new markets open up. Sharia-compliant financial institutions are well placed to offer opportunities to both personal investors and international firms by providing services that would traditionally have been closed off. The interest amongst Saudi Arabia’s public, and the currently idle funds that could be called upon, is expected to add liquidity to the market and provide a wealth of benefits to both customers and the institutions themselves.

Mortgage lending is expected to ratchet up and competition in the market is already increasing, with new entrants and banks such as Al Rajhi making the most of their Islamic banking expertise to position themselves in the high growth market. Companies such as NCB Capital have already made progress in increasing the possibilities for customers but Ms Al Suhaimi says the trend reflects the new demands from the country’s public.

“Our global leadership is not a tribute to us but a statement about the appetite of Saudi clients to invest in Sharia-compliant products, and the relatively shallow offering available for them,” she explains. “I believe NCB Capital can do even more than we do today, and am committed to continuously improving our product performance and client service levels.”