Nurturing the nation's most precious resource

Article - December 5, 2011
Saudi Arabia knows it has to invest in its youth in order to compete in tomorrow’s business world 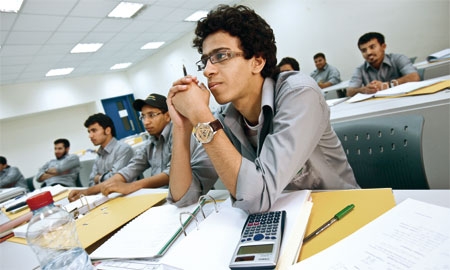 Saudi Arabia is focusing its socioeconomic development on its youth, and the kingdom is working to provide its inhabitants with the best possible educational services.

As it embarks on a countrywide path to further socioeconomic development, Saudi Arabia, like the rest of its Gulf neighbors, is undergoing a continuous population boom – and to address this surge the government is boosting the education budget. In 2011, a total of $40 billion (SAR 150 billion) was allocated to this sector, representing a 9% increase from the 2010 $36.69 billion (SAR 137.6 billion) budget.

Saudi’s Ministry of Higher Education (MOHE) considers that investing in education is investing in the future. Good education and skills are crucial to improving one’s economic and social prospects and the nation needs to improve employability of the local population.

Saudi investments in education have tripled since the year 2000, in 2010 more than a quarter of government funds were designated to this sector. These annual increases reflect the government’s desire to invest in human capital. Part of this year’s budget fed the King Abdullah Project for Development of Public Education which included building 610 new schools in addition to the 3,200 already under way. In 2010, 610 were completed.

The number of public universities in the country has risen from eight to 24 and some rank among the world’s top. The objective is to double university students by 2014, from 860,000 to 1.7 million.

Despite market saturation of social science majors, the most sought after degrees continue to be social and religious studies, history and literature.

In recent years, the government has promoted more technical and engineering oriented programs to fill gaps in the workforce. New universities being set up are following the lead of the recently inaugurated King Abdullah University of Science and Technology (KAUST) and emphasizing these subjects and others in scientific domains.

2011 funds aided the construction of new universities and the expansion of already existing ones to increase student enrollment. They also enhanced the scholarships catalogue including the King Abdullah Scholarships Program (KASP), which operates in more than 21 countries and, since its creation, has benefited over 60,000 Saudi nationals. These programs encourage students to study abroad and gain expertise and know-how to apply subsequently to the local economy.

The MENA region possesses one of the most lucrative education sectors in the world. Today an average of 18.6% of MENA government expenditures are allocated to this sector compared to the world average of 14.2%.

The Ministry of Education’s Ten-Year Plan covering 2004-2014 contains women-focused goals which include organizing girls’ technical education and developing syllabi based on Islamic values.

Aiming to fulfill this objective, earlier this year the world’s largest women’s university, Princess Nora bint Abdulrahman University opened on the outskirts of Ridyah and is expected to host 40,000 students. It is a symbol of women’s participation in the building of Saudi Arabia’s future and reflects King Abdullah’s aim to open all avenues for women.

Saudi Arabia’s commitment to extending education opportunity to all Saudi society will continue in 2012.

Next year’s budget totals $144 billion – and 26% of that will be allocated for public, higher education and workforce training. $2.5 billion will go to completing construction of the “university cities” in different parts of the country, $3.2 billion will continue financing KASP and other projects.

The MOHE continues to train its future workforce through the establishment of academic agreements with renowned companies. In 2011, important partnerships were signed and the forecast is that this tendency will continue.

An agreement between GE and King Fahd University of Petroleum and Minerals (KFUPM) will award 30 scholarships to students with a commitment of hiring them following graduation. It is the first initiative of its kind carried out by the company.

Intel has committed to training 100,000 educators across the country on in technological programs.

Higher education in Saudi Arabia continues to grow. The amount allocated to education and training is expected to grow in years to come as the annual budget dwarfs other sectors, proving the kingdom’s commitment to Saudi youth.