Article - August 8, 2011
A top priority for both the private and public sector in Colombia is education, and the Santos administration has targeted rural areas, scholarships and higher education as key areas 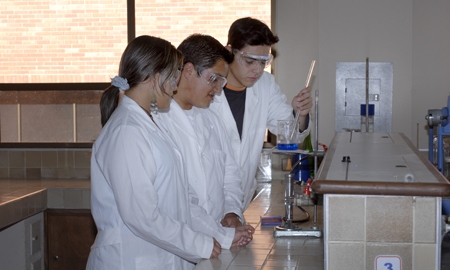 There is a general consensus that research and innovation at university level will both improve the conditions both in Colombia, through educated citizens working together, and in the world, with businesses being able to compete on a global scale.

Last year during his presidential political campaign, President Juan Manuel Santos toured the country calling innovation one of the ‘locomotives’ that mark the nation’s future.

Explaining that academic university education is the base of economic development for his country, the President highlighted his goals which include closing the gap in the quality of education between urban and rural areas; increasing the number of spaces for new students; assuring resources for disabled people and students of ethnic minorities; and assisting low-income families who want to send their children to college.

Paralleling President Santos’ objectives, Colombian Minister of Education Maria Fernanda Campo wants to reform education policy to ensure continued financial stability in the sector. She has recently proposed reform that would allow an additional 2.4 billion pesos ($1.3 million), half originating from public funds and the other half coming from the private sector. However, she affirmed that Colombian universities would maintain autonomy over their research, and that investments from corporations would not mean the government will privatize its universities.

These funds, according to Ms. Campo, would be used to emphasize regionalization, continued improvement of quality, preparing and educating professors and finally, investigation. She hopes that private funding will specifically go toward the development of research projects in order to make Colombia even more competitive on an economic international level.

“Colombia is making a great effort in postgraduate programs because we believe that the country’s competitiveness depends heavily on these educational programs,” says Moises Wasserman, president at the National University of Colombia, a public university with campuses in some of the major cities across the country, including Colombia’s capital Bogota and its second-largest city, Medellin.Medellin is also the home of the University of Antioquia research facility, which is one of the most successful and selective institutions in Colombia. It leads in investigations in fields ranging from medicine to agriculture to music. Medellin has been awarded the most educated city by the Quality Education Network.

“The research undertaken by universities in conjunction with the production sectors of the country is very important for competitiveness and the development of the country,” says the president of the University of Antioquia, Alberto Uribe Correa.

His university’s research has led to breakthroughs that include an anti-venom serum for the deadly tropical diseases of dengue fever and malaria, as well as the discovery of a plant with immunosuppressive properties that can be used in organ transplants. This has subsequently led to patents on an international level including the United States and Spain.

These Colombian research institutions have already made large strides in the medical field, volcanology and seismology, and in anthropology, facilitated by the large pre-Colombian archeological sites. However, the universities around the country are interdisciplinary, some focusing on research and others emphasizing the preservation of arts and culture.

Juan Luis Mejia Arango, president at the University of EAFIT, a private college also located in Medellin, insists on interdisciplinary study for continued development of Colombian students: “At EAFIT we are very interested in the humanistic education of our students. Topics such as music, dance and painting are fundamental for the education for human beings.”