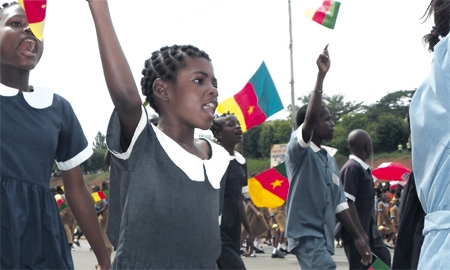 Cameroon is a young country, both in terms of its constitution and its populace. Last year it celebrated 50 years of independence and this year marks its half century as a reunified nation, where 73 per cent of the population is under 35 years old and just 3 per cent is over 65. Cameroon can also celebrate having one of the best educational systems in Africa: 90 per cent of all children aged between six and 12 years go to school and the adult literacy rate is over 85 per cent. “We are a young nation,” comments Essimi Menye, Minister of Finance. “We want to be a modern country that changes for the sake of its population.”

The Government places great stock on the republic’s youthful populace as being vital to Cameroon’s development and it increasingly strives to create an enabling environment for the younger generation to succeed.

In late 2009, to cover the first 10 years of its Vision 2035 long-term development plan, Cameroon drew up a Growth and Employment Strategy Paper (GESP). Serving as a framework for developmental activities between 2010 and 2020, the GESP focuses on boosting growth, creating formal sector jobs and reducing poverty.

Specifically, it sets the following three targets: to raise the average annual growth rate to 5.5 per cent over the 2010-20 period; cut the underemployment rate from 75.8 per cent to below 50 per cent in 2020 by creating tens of thousands of formal sector jobs annually over the decade, especially for the youth; and thirdly reduce the monetary poverty rate from 39.9 per cent in 2007 to 28.7 per cent in 2020.

“One of our major preoccupations is investment but more so is the training of Cameroonians in order to incorporate them into the workforce,” says Zacharie Perevet, Minister of Employment and Vocational Training. “We now speak of the ‘professionalisation of higher education’ as it is absolutely necessary that graduates should be able to do something practical. Our main preoccupation is to effectively train people with capacities for self employment; if a carpenter has been trained, for example, he can set up his own business.”

Recent years have seen a series of improvements in the education system: the launch of new universities; awarding of scholarships to students; creation of new institutions; construction of classrooms; youth training in public centres for rapid professional progression; and the introduction of many job seekers into the job market by the National Employment Fund.

“Cameroonians have been formed both internally and internationally and the country’s universities have the objective to form students in the perspective of present and future investments in Cameroon,” says Issa Tchiroma Bakary, Minister of Communication. “When you have all these conditions you have a considerable attraction to bring investors.”

In his address on February 10, the eve of Cameroon’s 45th annual National Youth Day, President Paul Biya pledged to create 25,000 new public sector jobs this year for young graduates. He said: “Regarding the integration of youth into the economy, the state, alongside actions by the National Employment Fund, has continued to support programmes designed to give the greatest possible number of young people opportunities to start a working life. Such is the case of the project to support rural and urban youth and the project for the integration of youth through the manufacture of sports equipment. These two projects have enabled the integration of several thousand youths into economic life, the launching of hundreds of micro-activities and junior enterprises and the creation of dozens of cooperatives.”

While launching the National Youth Week on February 4, Minister of Youth Affairs Adoum Garoua called on the nation’s younger generation to remember the history of Cameroon and to try hard to preserve its unity, democracy, bilingualism and liberty. During the week, 50 young Cameroonians from diverse backgrounds were trained in entrepreneurial skills under the Ministry’s Youth Empowerment Program.