A middle-income nation by 2021

Located at the heart of a booming region, Bangladesh is ideally placed to maintain and improve economic growth and achieve middle-income country status by 2021. Internationally Bangladesh has emerged onto the world stage with key contributions to the international community’s efforts for peace, stability, and development 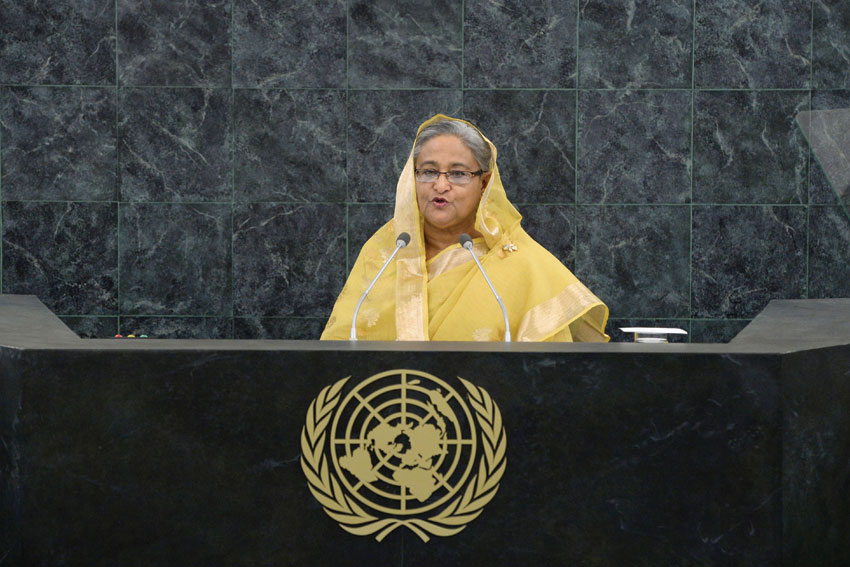 Bangladesh achieved independence in 1971 following a glorious Liberation War. This was the culmination of decades of struggle for freedom and statehood  under the inspiring and resolute leadership of the Father of the Nation Bangabandhu Sheikh Mujibur Rahman. In 1974, Bangladesh joined the United Nations. On 15th August 1975, Bangabandhu along with most members of his family was killed and Bangladesh slided into military dictatorship and misrule for long.

As announced in 2008, the Government of Prime Minister Sheikh Hasina has embarked upon the ‘Vision 2021’ pledge, an ambitious but achievable roadmap that reflects the hopes and aspirations of the citizens of the country. Along with ensuring higher per-capita income, the ‘Vision 2021’ lays down a pragmatic development architecture where citizens will have a higher standard of living, will be better educated, will face better social justice, will have a more equitable socio-economic environment, and the sustainability of development will be ensured through better protection from climate change and natural disasters.

Though ‘Vision 2021’ does not seek to completely eradicate poverty in the next six years, Bangladesh’s national goal of minimizing the number of people living in poverty to 14% of the population by 2021 is remarkable. To do so, the Government will have to lift some 15 million people out of poverty. The statistics show that the poverty rate has been reduced from 56.7% in 1991-92 to 31.5% in 2010. The Government of Sheikh Hasina has further brought it down to 22.4%.
Another key component of ‘Vision 2021’ is the Digital Bangladesh program, which seeks to transform the country into a digitally connected society through the inclusion of marginalized people. Bangladesh’s progressive Prime Minister Sheikh Hasina, who was re-elected in 2014, has outlined four priorities for Digital Bangladesh: to develop the country’s workforce so that it can compete better in the 21st century; to connect citizens in ways that are meaningful to them; to bring services to citizens’ doorsteps; and to make the private sector and market more productive and competitive through the use of digital technology. Through adopting a plethora of national, regional and multilateral initiatives, the incumbent Government has made significant strides in the advancement of technology, and spurred the economic growth rate by bolstering the technology sector.

‘Vision 2021’ also envisions a country that would be built on principles of democracy, inclusiveness, justice and fairness, accountability, and good governance. Through implementing a number of concrete initiatives and interventions within the framework of ‘Vision 2021’, the Government is pledge-bound to turn the country into a middle-income nation. The target date to reach this remarkable milestone is only six years away in 2021; the year in which Bangladesh will celebrate its 50th anniversary of independence.

Since the historic admission to the United Nations (UN) in September 1974 under the visionary leadership of the ‘Father of the Nation’ Bangabandhu Sheikh Mujibur Rahman, the UN remains Bangladesh’s close and trusted development partner with its imprint on almost all spheres of national efforts in promoting peace, democracy, development, and good governance. Bangladesh has, over the years, also earned the distinction of being one of the highest troop contributing countries to UN Peacekeeping Missions, including a noteworthy female police deployment. As a founding member of the UN Peacebuilding Commission, Bangladesh continues to contribute in post-conflict rehabilitation and reconstruction in different parts of the globe.

Bangladesh, one of the low-income countries, has gone a long way in achieving the MDGs. It has been acclaimed as a model country regarding MDGs by the global community. Bangladesh has already met, or is on track to meet, MDG 1, 2, 3, 4, 5 and 6. Taking into account Bangladesh’s remarkable achievements in the socio-economic sphere, the UN Secretary General Ban Ki-moon termed Bangladesh as ‘a dynamic UN Member State’ and highly commended the country for making important gains in achieving the MDGs. Building on this experience, Bangladesh was closely involved with the formulation of the post-2015 development agenda, including the Sustainable Development Goals (SDGs).

Meanwhile, Prime Minister Sheikh Hasina was awarded with the Indira Gandhi Peace Prize 2010 for her outstanding contribution to peace and democracy. Her other notable achievements include the award for Achievement in Fighting Poverty 2013 from the International Organization for South-South Cooperation, recognition from the Organization of American States for the Digital Bangladesh initiative, and the Tree of Peace Award 2014 from UNESCO for outstanding contribution to promoting girls’ and women’s literacy and education. Prime Minister Sheikh Hasina has been announced as one of the winners of the United Nations Champions of the Earth award this year in recognition of her global leadership in climate discourse and initiatives to address climate change nationally and internationally.

Straddled between South and Southeast Asia and lying between the Himalayas in the north and the Bay of Bengal in the south, Bangladesh holds a very significant position from a geostrategic perspective. Considered the third largest Muslim country in the world and the second largest in South Asia, the country’s location within the ‘geo-strategic frontier’ of India, South Asia’s most powerful country, and its close proximity to China, Asia’s largest power, gives Bangladesh undeniable geostrategic importance.

With the country’s progressive policies having also helped it become recognized as one of the fastest growing countries in the world over the past few years, Bangladesh has further grown into its more prominent role on the world stage. Bangladesh, for example, remains on the global forefront in maintaining a ‘zero tolerance’ approach to all forms of terrorism and violent extremism. Bangladesh is now recognized as a democratic, pluralistic and stable country in South Asia. Under the able and dynamic leadership of Prime Minister Sheikh Hasina, the Government is further committed to creating a stronger, more durable and ever-flourishing friendship with all key partners, including its neighbors. Bangladesh’s recent achievement in resolving land boundary disputes with India has demonstrated its ability to successfully defuse critical geopolitical issues. This experience could be applied to mediate similar disputes elsewhere in the world in the future.

As Bangladesh strives to realize its ‘Vision 2021’ to build a middle-income, knowledge-driven economy, it counts on the unflinching and assuring hand of support of regional as well as global partners to forge ahead in its shared pursuits of peace and prosperity.