Recognized as one of the most innovative cities in the world, Medellin has created a dynamic ecosystem for entrepreneurs looking for intelligent capital, flexible industrial-academic partnerships, and skilled human capital, amongst many other assets. Juan Camilo Quintero Medina, Executive Director of Ruta N, explains what gives Medellin its edge. 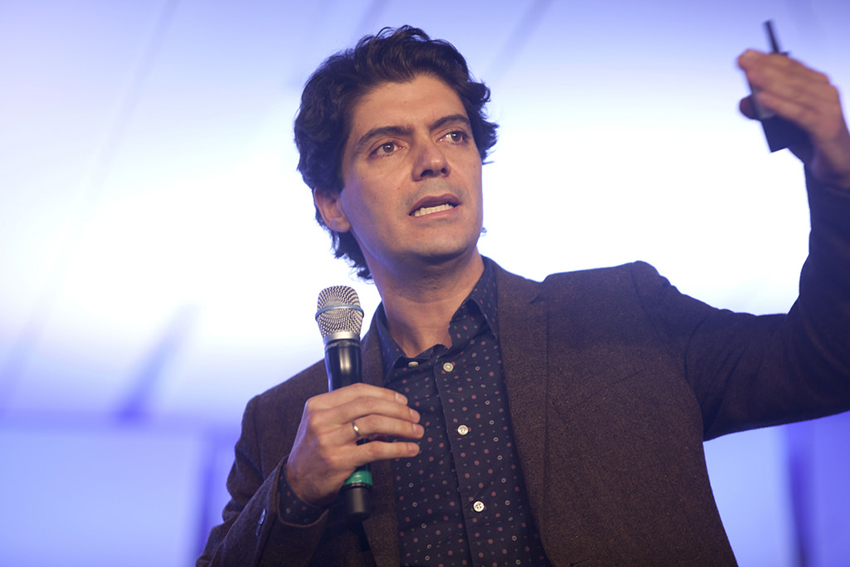 The economy in Colombia has been handled very conservatively. Despite the ups and downs of the economy in the region and in the world, it has been able to grow and evolve in a sustainable manner.

Colombia is expected to grow 3% this year. President Santos has said that our economy was the seventh fastest growing economy in the world during the last semester, and that is something we are really proud of.

But we must not lower our guard. The government is carrying out important actions in the infrastructure sector, in order to keep the growth rate in 2016, which apparently will be an even more difficult time.

Colombia is expected to enter the OECD for 2016. Mr. Londoño told us that this “is extraordinary, it will bring international standards and further equality into the country”. What will Colombia learn from, and what can it contribute to, the other members of the OECD?

Entering the OECD is a very important challenge for the country. It can provide us with indicators of high performance which will allow us to compare ourselves globally, for example with Asian countries that are leading in almost all of their indicators.

On the other hand, it gives us a reference regarding the investment in science, technology and innovation (STI). The OECD members invest an average 4% of their GDP in STI.

Colombia is really behind in this matter, we need to invest more, because STI is fundamental to improve the competitivity of any country.

In Medellin we have set ourselves the goal of reaching 2% of the region’s GDP allocated to STI by 2018.

Entering the OECD will help us acquire new tools, programs, and policies, which will allow us to work on future projects in order to bridge our gaps.

The year 2015 will be a milestone if peace is finally achieved after more than five decades of armed conflict. What is the responsibility of institutions such as this in the post-conflict process? How will this impact the general socioeconomic development and the STI sector?

The peace process will have an impact on several socioeconomic aspects. On one hand, several economists have predicted that the GDP could grow 1% if the peace is reached.

Also, the country is now among the top ten countries in armament spending. Those resources could be assigned to education, science and technology, and the well-being of the general community.

And third, it would mean to finally leave behind a heavy burden that we have carried over these years. The time is now to start thinking about our development and prosperity, to make Colombia an increasingly competitive nation.

In 2012, both the Citi Group and The Wall Street Journal classified Medellin as the most innovative city in the world. It is said that one of your goals for 2021 is the consolidation of that regional leadership. What does Medellin have that other Latin American cities don’t?

It is not really our greatest obsession to be named the most innovative city in the world. Although it is a prize that has helped us quite a bit, our main goal is to bring wellbeing to our citizens through STI.

Medellin was able to create a great ecosystem these last few years. The concept of an “ecosystem” comes from ecology, where it is impossible to find two systems that are exactly the same, therefore there is no room for comparisons.

Ecosystems cooperate and complement each other. For example, one thing that separates us from Silicon Valley is that we are interested in working on forgotten diseases, like the tropical ones.

We are working on a very important project to treat the Cutaneous Leishmaniasis, which can be interesting for other innovation ecosystems.

In Medellin we have developed an ecosystem that is appropriate for entrepreneurs who want to find an intelligent capital, a place where the public-private-university partnerships are flexible and dynamic, with a solid system for assistance in matters of intellectual property, valuation of intangible assets, technological transference, and so on.

An additional advantage is being in a nice city, medium sized, without huge problems of transportation or pollution. Here you will find a thriving market, with human resources that know how to operate and think internationally.

Finally, it is a place with the capacity to take care of the new investments. In the last two years, here at Ruta N we have set up in business 70 companies from 14 countries, in a wide variety of new knowledge areas for the city.

You offer a whole ecosystem of transversal innovation, creating synergies between the different players who operate here. How does this co-working process function? What facilities do you provide in order to boost these synergies and talents?

We have three main pillars to boost the ecosystem. First, to increase the investments in STI. Second, to strengthen all institutional abilities, so they can provide a better service.

And third, to establish connections with other regions, which will allow us to bring more knowledge into the city.

The world today is not about competition, but about cooperation. Problems are not solved inside a single discipline or a single ecosystem anymore.

What you need to do is to create bidirectional flows of knowledge, which allow you to nurture enough information to solve a specific challenge in society.

We are trying to develop a model inspired in biology, what we call “meta-cities”. It’s about creating biological corridors, in this case about knowledge, that allow us to develop new ideas and not to succumb to endogamy due to the lack of external relations.

This year we will host an event on August 31st called “Cities for Life Global Meeting 2015”. We have confirmed the participation of more than 45 cities.

Our goal is to work on cases of innovative cities, which will be encoded in a web-based platform to allow for global access and continued learning from every city in the world that needs it.

In an article published last year by El Tiempo, experts from Silicon Valley pointed at Colombia as probably the next ICT hub in Latin America, but also said that they need to act quickly because there are countries like Mexico, Brazil and Chile on their tail. What are the main challenges to overcome in order to transform Colombia into an international hub for connections and entrepreneurship? What efforts is the national government making in this regard?

First, the Santos administration is increasing the investment in science and technology, focusing mostly on innovation. The royalties gathered gave a huge thrust to the STI sector; there is an injection of approximately one billion pesos a year.

Secondly, institutions are increasingly stronger. And thirdly, there is progressively more understanding with the private sector regarding the role that innovation has to play.

Last year, around 2,000 companies and institutions signed an alliance for the promotion of innovation in the city.

We have developed indicators inspired by the European Union, so our program measurements are oriented towards the creation of new abilities in the city.

I’ve had the chance to present to the OECD in Paris everything Medellin is doing in the area of STI, and we truly felt like we are moving in the right direction.

We are working together with this organization and different universities in order to get a better understanding on how to close our gaps in front of the rest of the members of the OECD.

One of the products of these gatherings has been a project for innovative public purchasing which is now being implemented in the entire country; our city is hosting several pilot projects of this new strategy.

The manager of Business and Innovation for the Ministry of Trade, Industry and Tourism, William Pérez, said that the goal of the Ministry is to continue positioning Colombia as an international ecosystem for entrepreneurship. Kara Shurmantine, Director of Global Partnerships at MassChallenge, has mentioned that although everything the city has undertaken so far has been very positive, the next step is positioning it as a regional hub for innovation. How are you promoting Colombia, especially Ruta N, for the world to know that you are ready to be the main regional hub?

Entrepreneurs know that here they will find money, venture capital funds, excellent human resources, and transparent governments; they are all favorable conditions. In order to consolidate and make ourselves known, we are developing a district for innovation, of 2 million square meters in size.

Thanks to ProColombia and the Agency for Cooperation and Investment of Medellin and Antioquia, we have made a series of international trips to promote the city as a destination for investment.

Besides, we have created specific partnerships, for example with the Scientific Park of Barcelona, which allows us to encourage cross- pollination of start-ups.

Although we are still interested in receiving big companies, we are now focusing on smaller companies with very interesting prospects of growth.

They’re very interesting because they’re very intensive in STI, their growth rates are higher than average, they demand capital, attract new investment, and are capable of developing technologies that mobilize the ecosystem.

The United States is Colombia’s main commercial and geostrategic partner. It is a world leading country in business and technology, for example in places such as Silicon Valley or Boston. What examples of cooperation between the two countries would you highlight? In what areas do you think the United States could play a more active role?

We’ve had a lot of communication with the United States, especially since we know that Miami is also intending to become an innovation hub.

That is why we are interested in creating new connections to nurture our innovation ecosystem through cooperation.

Specifically, we have developed an entire strategic plan for our district, which has three development phases in order to achieve 28,000 new jobs before 2025 in those 2 million square meters.

We planned this together with the MIT.

Another example which shows the close relationship between both countries is the Purdue University opening here their first branch outside the US.

We are very interested in having more US universities opening new branches here, because that will allow us to create new abilities and knowledge closer to the realities of the country.

Steve Jobs once said that innovation is what distinguishes a leader from its followers. If I come back to Medellin in 10 years, how would you like me to find the city by then?

Medellin has definitely embraced the STI sector. Our three main priorities today are health, energy and STI. We expect to have an important recognition in the region for our contributions and innovation.

This city will have a huge capacity in the research of the big problems of mankind. For example, by that time we expect to have a fully developed nanotechnology center and an advanced hi-tech ecosystem, harboring entrepreneurs and researchers from all parts of the world.

Medellin will be a global hub for the exchange of knowledge, where issues are processed, launched to the world through global platforms of co-creation, and possibly solved by the most relevant innovation ecosystems.