Inspiring generations to ‘be ambitious’

One of the most prestigious and respected universities in the country and a core pillar of higher education not only in Japan but also Asia, Hokkaido University currently has around 18,000 students enrolled, 10% of which are international students from more than 85 countries. The university even has a reputation for having the happiest and most satisfied students in the country. President Prof. Keizo Yamaguchi explains what makes it such a unique seat of learning in Japan 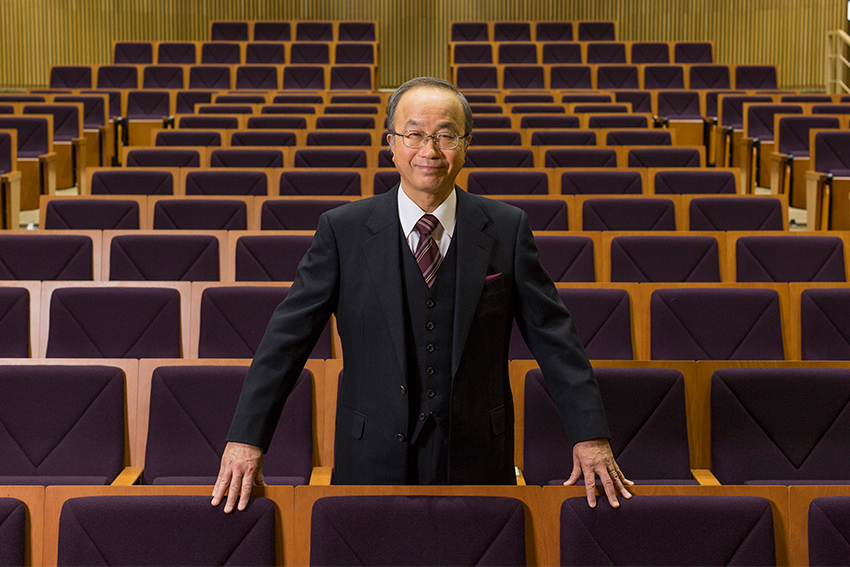 What would you say are the key characteristics that best describe Hokkaido University?

Hokkaido University is one of Japan’s top national universities, yet it has some very unique characteristics. One example would be the values that it inherited from its origins as the Sapporo Agricultural College. Our university is guided by four basic philosophies: a pioneering spirit, respect for global perspectives, an all-round education, and practical learning. These four pillars are our basic philosophies from the time of Dr William S. Clark, the former president of Massachusetts Agricultural College and the founder of our university. This actually had quite a special meaning at the time of the foundation of the Sapporo Agricultural College in 1876.

The Agricultural College was originally established in Sapporo to cultivate Hokkaido Island, and Dr Clark was invited to teach and modernize agriculture here. Importantly, Professor Clark taught students not only the pragmatics and practicalities of farming, but also English, humanities and Bible study. So, given this environment and ethos, Hokkaido University had a very special start and we continue on with this early philosophical grounding. In this sense, I would suggest that our university is quite special compared to other universities in Japan.

How are the history and philosophy actually inherited by the students and people here now?

Borrowed from Dr Clark, our motto at the university is: “Be ambitious”. And this has a strong influence on the students. The students are very ambitious indeed. Leaving their homes and coming to this island can be challenging. It’s very important for us to nourish their spirits and we must encourage them to go abroad and work internationally. That’s one of the current aims of our university.

Inazo Nitobe, an alumnus of the university, is known for his book “Bushido” and also his words: “Serve as a bridge across the Pacific Ocean”. Could you tell us more about him?

Nitobe was an alumnus of Sapporo Agricultural College. Soon after he graduated in the early 1880s, he left Japan and went to the United States. In fact, he studied at Johns Hopkins University. Later he came back to Japan as a professor of Sapporo Agricultural College, and he returned to the states and wrote “Bushido: The Soul of Japan” in English during his stay. In this rather famous book, he expressed for the first time to an English language audience the culture and thoughts of the Japanese people. He was quite a unique figure and he remains a model for our students today. He worked internationally and became the first consulate general of the League of Nations and under-secretary general.

The university is recognized for its R&D and technical competency, sitting in the world’s top 150 in the QS university rankings. How does the university’s expertise raise its importance to the country, and also the international community?

We stay current with changing trends. Nowadays, each scientific discovery needs to be applied to real world issues as soon as possible. For example, problems such as the effects of global warming or the need for safe and secure nuclear power actually require our most immediate technological attention. In a way, scientists and university people could indulge in a rather secluded, ivory tower world in the past. However, our contemporary concerns and needs always change situations in the context of the university as a research and education space. We feel that universities should work to help society.

Could you give us some example of how the university is contributing to society?

A recent example is the proton therapy beam developed by our medical doctors and engineers in concert with the Hitachi Corporation. Unlike X-ray beams, a proton beam stops at the desired depth and so can be utilized extremely accurately, even targeting moving cancer cells. As a patient lies down, doctors can send proton beams to cancerous areas from any angle very easily.

This collaboration with Hitachi was a success. Hitachi also succeeded in downsizing the cyclotron making it a very good product as a medical instrument. Hitachi is now seeing good sales with many major hospitals in the US, such as the Mayo Clinic or recently Johns Hopkins University Hospital, which have adopted the use of this proton beam therapy. So that’s a very good example of the cooperation between the university and industry.

It is in the interest of students and universities today to maintain these close ties for the development of ideas like this, but also for the future when they enter the job market and move on with their careers. Could you give some more examples if you have any?

We are also developing pre-healthcare systems in Iwamizawa, a neighboring city of Sapporo, as part of a food and medical innovation project. That city has more elderly people than an average city in Hokkaido. It also has a really good electrical infrastructure. So combining these two aspects, we are developing a system to monitor the ‘on’ and ‘off’ of TVs at elderly households to keep a closer eye on them. Another system we are developing uses smartphones to monitor the health status of mothers and their infants to give them customized healthcare advices.

How does the university coordinate its internationalization efforts in order to get increased numbers of students from Europe and the US, for example, to come to Hokkaido?

We have several things in progress. For the Top Global University Project set by the Japanese government, we devised four schemes. One is the set of programs to raise global leaders called the Nitobe College and Nitobe School, the first tailored for undergraduate students and the latter for graduate students. Nitobe College especially focuses on Japanese students going abroad. We put them in a very extensive English course, and at the same time equally good Japanese cultural courses in English. When our students go abroad we want them to understand the need to be able to communicate and cooperate in an international environment; this also means understanding your own country and being able to talk about it in English.

The second thing is creating new academic fields. We built what is called “GI-CoRE (Global Institution for Collaborative Research and Education)”. Within that, we have created three platforms to conduct international collaborative research and education on special subjects such as Quantum Medical Science and Engineering, Zoonosis Control, and Food, Land and Water Resources.

In the Quantum Medical Science and Engineering project, we work together with scientists from Stanford University who are staying here at our university. We also have a special zoonosis center for veterinary science where they conduct good collaborative work with professors from Australia, Ireland and Saudi Arabia. Our aim with this GI-CoRE project is to extend its research area to include, for example, soft matter science, big data and cybersecurity, Arctic research, and to create special graduate schools specializing in those areas.

We are also working on the ‘Hokkaido Summer Institute’ to be launched in 2016. This program is designed to provide students from around the world, including ours, with exciting learning experiences. Participants can join the courses to learn from top-level researchers we invite from all over the world. We plan to increase the number of courses up to 300 by 2023 to cover diverse areas. We will also open courses outside of Hokkaido as well – a project called ‘Learning Satellite’. We plan to create 60 courses by 2023 for the project.

How do you communicate these brands and the quality of these exchanges and different graduate schemes, etc., you have in place to the wider international community?

Through engaging with these projects, we recommend that our professors find partners overseas to participate in these summer institute and learning satellite projects. Later, our intention is to promote international collaboration among those professors. This is our strategy to aim for a position amongst the top 100 universities globally. To achieve that goal, we need to continue publishing outstanding research papers, especially joint papers with the international community.

You’ve been in this role at Hokkaido University since 2013. As you continue your tenure on here, what is the type of legacy you’d like to leave with the university?

I want to make our university more visible and recognized in the global community. Hokkaido is a very special place in Japan. The climate is similar to many areas of North America or Europe, and more comfortable in summer compared to other parts of Japan. More importantly, as I mentioned today, our university has a unique history and a variety of international research and education programs. Given all of these qualities, we are in a particularly good position to further internationalize our university. I would like to raise our university’s profile in the world. That’s my hope.

What is your final message to readers?