After a challenging period, Thailand’s economy is steady and strengthening

The Upper Reach Team interviewed Sommai Phasee, Minister of Finance. During the interview, he stressed the focus of the government to raise the competitiveness of the Thai economy through the implementation of Special Economic Zones and big expenditure in infrastructure. He explained that the decrease of some taxes such as the Property Tax would spur the economy in 2015 up to 4%. 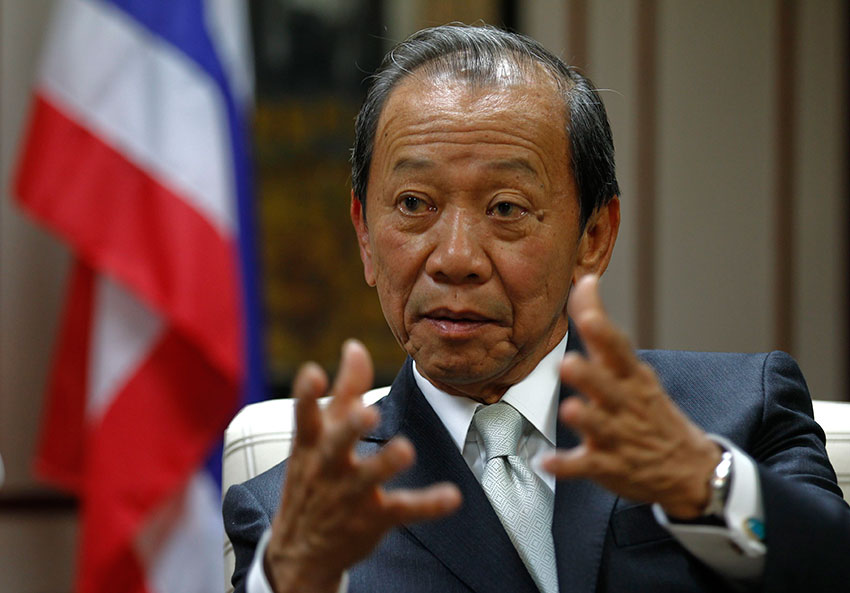 It is February 11th, we are interviewing Khun Sommai Phasee, Minister of Finance, for a special report to be distributed with The Times. The AEC intervention is almost a reality by the end of this year. It will change the dynamics of the whole region. Prime Minister Prayuth stated not long ago, "We must continue to raise our competitiveness to stay ahead of our neighbors, especially with some countries that can be considered both partners and economic competitors." The Government is then committed to improve Thailand's competitiveness.

AEC is a very good commitment, the best commitment among friends who are also our neighbors. We have worked with our friends regarding cooperation for some time.
For example, we have created ASEAN Free Trade Area or AFTA. Improved Trade and Customs clearance across borders is also important. In terms of investment, we can invest in any country with special treatment among ASEAN countries. This may be different from investors from the UK and other parts of the world.

The movement of labor among countries is also critical to legalize previously illicit workers from our neighbors. The Ministry of Labor is now working on many aspects of the movement of labor from Myanmar, from Cambodia and Laos. Another challenging area is the financial sector. Thailand has a great potential to become the financial center of the AEC because we are 2nd biggest economy in ASEAN. But we have to do a lot of things regarding the currency or monetary aspects. We have the Bank of Thailand that has been more open for development in this field. We are ready to move as fast as possible. Apart from that, our Prime Minister has said he is working very hard to set up the Special Economic Zones to facilitate trade and investment on the borders. With factories on the borders, especially near Myanmar or near Laos, businesses can take advantage of available labors and raw material from our neighbors. Also because Thailand is in central position, we want to expand, extend, and be connected with the AEC by rail, by road and by air.

Moreover, we already approved new policies on international headquarters (IHQ) by granting tax and non-tax benefits to companies setting up their headquarters in Thailand. And we are excited about this. Not only tax exemptions will be granted to various IHQs, but also to the International Trading Centers (ITC). These two come together at the same time. We are discussing also, to become a center for trading of electricity because of our geographical location (Laos, Myanmar, Thailand, and China, for example).

Regarding the measures on infrastructure that you have mentioned, I would like to ask you about the financial aspects of this huge infrastructure plan. As mentioned yesterday in the newspapers, the PPP Policy Committee has drafted a proposal that was sent to the Cabinet and the meeting was today.

You are really very quick. In fact, I had a meeting this morning on the PPP which is likely to be almost the final one. We discussed multiple projects, such as rails, metropolitan transit, roads, telecommunication, Internet, water, education, etc. I discussed with the Minister of Transport how to finance the whole infrastructure projects. We agreed that the Government alone may not be able to finance such a huge project over 8 years; therefore we need some degree of private participation. PPP should be the best solution for Thailand as it would for many other developing countries. As far as I know, there are a lot of foreign investors showing their interest in investing in our projects. However, we need to closely cooperate with them on how they can participate in the projects under our related laws.

We would like to talk about the tax policy to increase the revenues that you were mentioning before. What are the guidelines of your policy regarding tax compliance to fight against corruption, and of course the fiscal policy?

My last name in Thai means "tax" and that is probably why the government assigned me to this position. While Inheritance Tax is under the consideration of National Legislative Assembly, Property Tax is still under my consideration. The Property Tax is actually not new in Thailand. However, to implement the new one, we need to abolish the current one. I really expect that the property tax will be effective in the beginning of 2017. This tax will increase our local authorities’ revenue rather than the central government’s revenue. I expect that it could generate revenue of around 250,000 million baht a year when it is fully effective. As a result, the government could reduce subsidy to local authority which currently costs the government about 250,000 million baht per year as well. Meaning, the government will have more financial resources to spend on other productive projects, such as transport or infrastructure projects.

What about the tax compliances? We know that fighting against corruption is also a focus of this government, because it helps to increase revenues for the central government. How will the revenues work against it?

On revenue administration, I take care of the Revenue Department which contributes about 65% of total government revenue. For the Excise Department and Customs Department,
I assigned my Deputy Minister to look after it.

Regarding tax under the revenue department, VAT rate at 7 percent in Thailand is relatively low compared to other countries and the VAT statutory rate is 10 percent. The applicable rate is under review. However, the government is still considering when or how much we should raise the VAT rate. Though we should enhance revenue in a medium-term, we have to consider the appropriate timing for the increase in VAT rate during the economic upturn.

It’s an international trend now…all the countries are increasing VAT to bring up revenues fast in a way that people don't feel it very much at the end of the year with the revenue taxes.

I think that VAT collection in Thailand has some loopholes. If we could close it efficiently, we could probably gain revenue by 15-20%. To work on this issue, I have to consult experts in the private sector since they are the one who take advantage of the loophole.

As you know, we are publishing our report in the United Kingdom. Not long ago, the British Ambassador, Mark Kent, expressed his interest to the Minister of Transport, ACM Prajin Juntong, about the infrastructure projects that Thailand is carrying on for 2023. What advice would you give, as the Minister of Finance, to all the British investors that are thinking of coming to Thailand to invest their money here?

Needless to say, the UK has expertise in several fields that is far superior to others. Similarly, Japan has expertise in many, but not all, specific fields, and so do the US, France, and other developed countries. Investment opportunities for British investors are therefore enormous. However, in Electricity, Water, and especially Transportation, the Japanese and Chinese investors are both very active. My personal experience with the mass transit, however, is that I enjoy riding the train in Europe so much. Even though it's more expensive than taking an airplane in Thailand, the ride was pleasant and very safe.

And clean. Energy is the trendiness of the future.

The idea of renewable and clean energy also interests me. I believe that in order to be able to compete with other countries in terms of High-Technology, we have to thrust ourselves in the digital world. We have to push hard in this regard so that we can catch up with Singapore. As a first step towards that, we'll set up the Digital Ministry in the next couple of months.

I want to ask you a very last question. It's a little bit more personal. You used to be in a Ministry, but you were at home, you were retired. And you came back to this big responsibility. My question would be, how do you feel your responsibility right now to Thai people?

I'm confident that I can do a lot of things for Thai people.

For example, the Ministry of Public Health has very limited budget compared to the money that they need to bring about improvements in our public health system. Unlike the area of Education, which doesn’t need much money to buy expensive tools for operations, the area of public health, however, needs a lot of money to invest in equipment in order to cover the areas that they cannot previously cover. So this year I told myself, "Ok, I have this limit, but I want to see a fast improvement in Public Health in Thailand". So I tried to find some budget or loan for them to allow them to make those essential investments and give them more resources so that they can bring changes to our country.

For my own Ministry, I think I can do the job. During my time working here as a civil servant,
I have gained a lot of experiences. And now that I’m working here, I have brought back together ex-MOF people. It's easy to communicate with them, both for me and for other officials, and we can make things really happen.