Interview - October 29, 2013
Abdulkarim Bucheery, Chief Executive of BBK Bank in Bahrain, speaks to Worldfolio about the current state of the Bahrain banking and finance sector and how it managed to stay so resilient during the financial crisis. He also talks about his view on mergers and acquisitions in Bahrain's banking sector, BBK's commitment to the growth of the SME sector and the country's leading position in Islamic finance 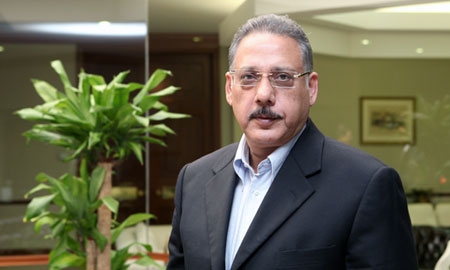 ABDULKARIM BUCHEERY | CHIEF EXECUTIVE OF BBK BANK IN BAHRAIN
The King and the Government have vowed to transform Bahrain and its economy into a more competitive, sustainable and diversified economy. In your opinion, as a business leader in the country, what role is the banking sector playing in this transformation agenda and what do you expect from these changes in the future?

At BBK we have a three-year strategy cycle and we establish a new plan at the end of each sequence depending on the market dynamics and what is happening in the world. It was a blessing for us to see the vision of this Kingdom and where it desires it to be in so many years time. Basically, we adapt and adjust our strategy to be in line with the country’s strategy. We know that the Government wants to develop transportation, infrastructure, health and education. We know that finance will be required in these sectors. I am sure that each bank has their own approaches, not just BBK, but we align our strategies towards achieving the Government’s goals. This is what we have done.
What do you think are the best opportunities for your own growth on this roadmap?

The best opportunities will not just come by engaging in the finance of projects that come under this roadmap but also by helping individuals contribute to the overall plan. It is not good if you only have the major forces working – you need everybody to turn every stone. We help individuals by extending financing. I think our main role will be in helping the SME sector. Bahrain has always been overly dependent on the Government and the public sector to activate its economy.
Today, Bahrain has a clear vision; we want the private sector to contribute to the growth of our GDP. The private sector mainly comes from the SMEs sector. If you look into the US, it probably contributes to more than 60 percent of total GDP. If you look at Turkey, which has been a great success over the past few years, the private sector is maybe 80 percent of the total GDP. The potential for growth in Bahrain is huge. Therefore, we have established a dedicated team, and we have upgraded and uplifted our IT infrastructure to a great extent. We have spent a lot of money on anticipating future gains in order to get ahead of other competitors and provide services to SMEs.
Undeniably, Bahrain´s financial sector has been very resilient during the crisis. However, people sometimes tend to put everyone in the same basket. What have been the main strengths of the Bahraini financial sector, which have led to this resilience today?

The resilience is due to the maturity and credibility of the Central Bank of Bahrain. There have been a lot of things that have been put into place to stabilise and bring confidence to the market. Early on, we adopted Basel III requirements, which as you know, does not only concern capital adequacy but also liquidity measures and operational and environmental risks. So, by adopting the Basel III requirements early on, we showed the market and our citizens that banks in Bahrain are quite advanced in terms of complying with this global regulatory standard.
What has helped BBK, in particular, is the fact that when there is a financial crisis, people look for quality. When a person has a concern they will move their deposit to a better quality bank. We have had the opportunity to benefit from this, being the largest locally incorporated bank and an entity that has visited the international market many times and raised bonds in the international market, where investors have shown confidence in the bank. The population knew that even during the tough years, BBK had positive strong profits, and we retained more profits in the bank to strengthen our capital base. BBK is a very dynamic bank and we remain very close to our clients by informing them about what is going on.
Today we have seen many mergers between banks. What is BBK’s position in regards to merging and how do you see the future?

Major acquisitions are taking place but, unfortunately, they have been between the smaller and weaker banks in the country. I have not seen a major consolidation between two strong major banks, like what happened in the UAE a few years’ back when the National Bank of Dubai merged with Emirates International Bank. Unfortunately, we have small banks merging together here with a lot of problems.
One of the major consolidations that will happen soon in the country is the merger between Al Salam Bank and BMI. They have announced their plans and the shareholders have agreed so they will merge. When this circumstance happens, they will become the third largest bank. You would think that when two major banks merge, they would definitely be the largest. BBK will still be larger than them and so will the National Bank of Bahrain. I hope that major consolidation will happen between two major banks, but that is very difficult in this part of the world.
Do you see BBK playing an active and aggressive role in future mergers. Are you considering mergers in the near future?

Of course, it is difficult for me as chief executive to predict, because these are shareholder decisions. But from where I sit, nothing can be seen in the future in terms of BBK consolidating with other banks, maybe an acquisition. BBK is a good and profitable bank. For this reason, there are major banks, with no retail business, that may be interested and acquire BBK.
Islamic banking is predicted to be worth $1.8 trillion in 2013. Globally, Bahrain is one of the leading Islamic financial hubs, together with Malaysia. What is BBK’s position in this regard? How is it strengthening its position in Islamic banking?

Islamic banking is divided into two areas – Islamic investment banking and Islamic retail or commercial banking. I think that for the former, the story is no different from any conventional investment bank. It is a difficult market, with difficult opportunities to exit at present, and that is what has led our decision to wind down our Islamic banking subsidiary. We had a fully owned Islamic investment bank. We found that there was no logic to maintain a large operation when you cannot do much, so we are closing it down and bringing the assets back into BBK. We are still involved in Islamic investment via BBK but not through a separate subsidiary.
Islamic commercial banks or retail banks definitely have good prospects. I think the future is there. There are many clients who are wishing to do their business using Islamic banking practices and I think they will find room to take a slice of the cake in the market.
I would say that commercial Islamic banking in Bahrain is advanced. They are on par with any other commercial bank in terms of products, services and infrastructure. Ultimately, it will be the choice of the clients. There are a growing number of people who want to convert into the Islamic mode of business.
In the future, what will characterize Islamic finance in Bahrain to maintain its leading position against all its competitors in the region?

Bahrain as the first mover of the Islamic banking business will always have an edge because we have more mature regulations and a very good, reputable and credible Central Bank. Above all, we have a skilful workforce and the Government´s determination to encourage and promote Islamic banking. The Government is extremely supportive of Islamic banking and they try to attract others. Bahrain has moved first in comparison to other countries. That does not mean that Qatar and the UAE will not be able to progress well and establish a strong Islamic financial sector there – they will, but hopefully the market is big enough for everyone to have a piece.