Article - December 18, 2013
The Islamic practice known as Zakat – the compulsory giving of a set proportion of one’s wealth to charity – has been enshrined in Sudan’s law, playing a vital role in social cohesion and social security 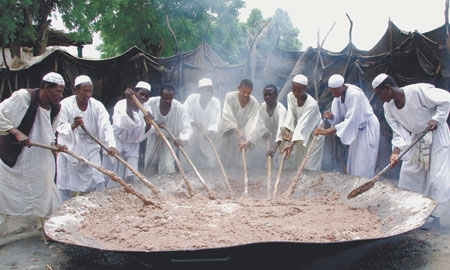 MEN TRADITIONALLY COOK PORRIDGE TOGETHER TO FEED THE COMMUNITY
SHARE

Similar to the Christian and Jewish practice of tithing, Zakat is an alms tax to help those in need and is mandatory only for those who can afford it. Zakat is a fundamental pillar of Islam and the word literally means “that which purifies”. Indeed, for believers, giving Zakat is much more than paying a simple tax; it is a soul-purifying act.
The generally accepted guidelines for calculating how much one is to pay dictate 2-2.5 per cent on capital assets and between 2.5 and 20 per cent on livestock and agricultural goods, precious metals and minerals. A Muslim’s net worth of assets must first exceed a minimum amount before he or she is obligated to pay Zakat.
Those who may benefit from Zakat, according to the Qu’ran can be divided into eight groups: the poor, those in temporary distress, the Zakat collectors, new converts to Islam, slaves (whose freedom can be bought), debtors, the mujahideen, street children and travellers.
Worldwide, the Zakat culture raising billions of pounds’ worth of donations that are used to fight poverty, weaving social safety nets in the areas where they are most needed. In Sudan, Zakat is mandatory by law and the government-run Zakat Chamber, established in 1990 and operating under the auspices of the Ministry of Social Welfare, is mandated with distribution. Interestingly, Sudan is one of just six countries with a state Zakat collection and distribution programme, along with Malaysia, Libya, Saudi Arabia, Yemen and Pakistan.
So ingrained is Zakat in Sudan, and so well-oiled its collection system, that in November this year Sudan and Libya agreed to cooperate and exchange experiences in Zakat. At joint talks held in Khartoum, the Director of the three-year-old Libyan Zakat Chamber expressed his eagerness to learn from Sudanese expertise.
The list of recipients legally eligible to receive Zakat in Sudan varies somewhat from the groups listed in the scriptures. They are, namely: disabled people, refugees, poor students, the homeless, orphans, mentally ill people, those with health problems, and the poorest of the poor. Sudan’s government also provides these groups with free health insurance.
Earlier this year, the Zakat Chamber allocated 32 million Sudanese pounds for disaster relief around the country, and over the years it has donated funds to mitigate the effects of starvation owing to drought and desertification.
A 2 per cent Zakat tax is automatically deducted from the salaries of people who earn more $1,500 per month, and the Sudanese government itself also makes significant contributions into the Zakat Fund. In 2011-2012, the collection totalled 700 million Sudanese pounds (£96.9 million).
Whereas Zakat is an institutional way to help the less fortunate, already deeply embedded in Sudanese culture is a feeling of social solidarity. Family ties and community togetherness are strong, with all members chipping in to help one another especially, for example, for crises, weddings and funerals. In most towns and villages, committees are formed to listen to people’s needs and to collect monies to build a collective fund which is then passed on at the end of each month to a family in need.