Writing excellence for more than a century

Amid the endless typing and clicking on smartphones and computers, ink-based writing instruments continue to prevail, which is why Platinum Pen remains committed to providing high-quality, elegant and affordable fountain pens to discerning customers for whom the art of writing will never die. We speak with president Toshiya Nakata to learn more about Platinum’s high-quality products and how Platinum, which celebrated its 100th anniversary in 2019, combines tradition and innovation to develop writing instruments fit for the needs and desires of its modern customers, based firmly on the belief that its fountain pens will always have a place even in our highly digitalized world. 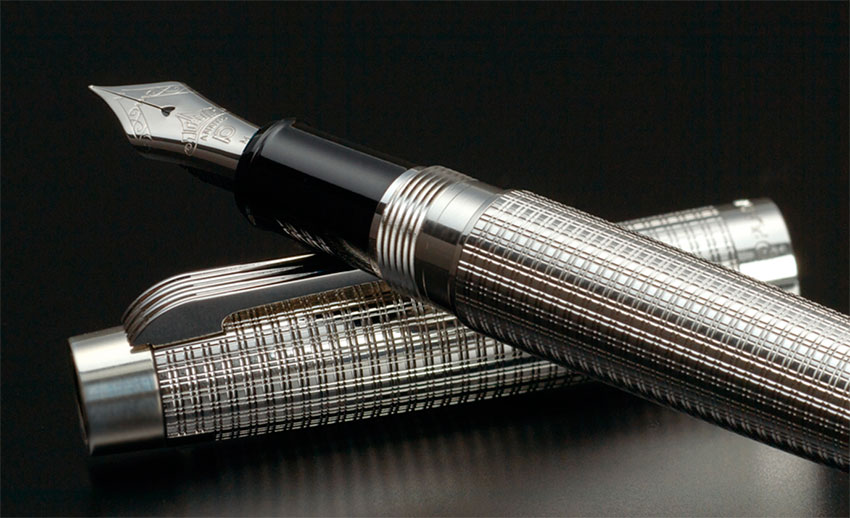 What are the high skills of Japanese craftsmen and the monozukuri spirit in manufacturing writing implements?

First of all, people who visit our factory often refer to our staff as “craftsmen”, because they seem to have a lot of human involvement in the production process. However, this is not the case, because a standardized line is not possible if each person has discretion like a craftsman.

Crafting by hand does not always mean it is the best way to manufacture; the nibs are standardized industrial products and must be standardized according to the process. Our subsidiary, Nakaya Fountain Pen (http://www.nakaya.org/en/), uses the nibs and customizes them for each customer. The division of labor is such that the materials are used in the standardization process, including the machinery, and the nibs are then customized by specialized staff. In the process, we receive data of writing characteristics from each of our customers around the world and conduct statistical analysis on a regular basis in order to pursue the optimal writing quality or the “taste.”

With the evolution of PCs and smart phones, writing skills of students are declining. Furthermore, Cambridge University is considering shifting from paper tests to PC tests. What should society do to prevent this decline? What role should your company play?

Actually, the opposite trend is also increasing. Writing contributes to creativity and brain activity; and the use of writing instruments in exams and reports continues to increase. In Europe, fountain pens have been used since the compulsory education stage. The megatrend is easy to see, but the other side continues to exist. Just as a pendulum does not swing only in one direction.

The more we live in such a world, the more people who use fountain pens feel the same way between each other. Whenever I’ve met people in recent years, who have "fallen in love with fountain pens" or "fallen off the fountain pen cliff,” I ask them why they "fell off" the cliff.

Among them, the so-called IT people say, "I feel like I write differently every day.” For example, "the ink flow is a little sluggish today compared to yesterday” or "the nib may have started to catch the paper a little lately.” Normally, this kind of thing would be a product complaint, but in reality, these reasons are why they seem to be so comfortable with the pen.

In the digital world, there are complaints ranging from “Ink does not come out at all! (0)" to "Too much ink is coming out and leaking! (1).” In the analog world, fountain pen users say “it feels a little more this or that than before,” which is something between 0 and 1. As the world around us and the way we think about things are becoming mostly digital, through fountain pens, I see the our human side diminishing. IT companies such as Google are adopting mindfulness, but the root is the same. The kind of consumption where you feel the human sensitivity is increasing, not only for fountain pens.

PREPPY was designed for children and beginner writers. Why did you choose to target beginners?

PREPPY was launched with the intention of our predecessors to encourage a wide range of people to use fountain pens, not just children. The total number of pens sold exceeded 10 million about four years ago, and the product is now being used in various ways around the world. Since this product is rather low-priced in comparison to fountain pens, we are seeing young women who used to carry many colorful gel ink ballpoint pens in their pencil boxes, put their own original ink in multiple PREPPY pens. PREPPY has become a part of a lifestyle for them.

Can you tell us more about your ‘slip & seal’ mechanism and why it’s so successful?

The ‘slip & seal mechanism’ is a technology that prevents the ink of fountain pens from drying out. When not used for a few days, the ink of conventional fountain pens often gets clogged, no longer flows, or thickens and therefore the pen doesn’t write smoothly or the ink doesn’t dry well but rather sticks to the writer’s hands. We solved these problems by reducing ink evaporation through improved sealability. This allows comfortable writing with fresh ink anytime and also reduces the need for repairs considerably. The technology has been patented and applied to the existing #3776 series, which was renewed as “#3776 Century.” We also applied the technology to the PREPPY series to make it easier to handle for people who do not use fountain pens regularly.

You have exclusive distributors in various countries, but are you planning to expand your sales to other countries?

We are interested in China and India. They appreciate our products and I think they will accept us. Overseas, writing instruments for daily use, such as ballpoint pens, are always disposable products. On the other hand, there are many heavy users who own more than ten good fountain pens and use them all the time. In recent years, this phenomenon has started in Japan as well; young women, apart from the traditional middle-aged and older generation, are starting to enjoy mixing colours for their own ink or buying ink first, and then looking for a fountain pen. With the help of the Internet, a "Fountain Pen Republic" has emerged, regardless of national borders. First of all, I would like to have a long-lasting relationship with those dealers who love fountain pens and also those who love Platinum fountain pens even prior to doing business with us.

What is the background behind the release of the 100th anniversary Century fountain pen with the number 3776 representing the height of Mt. Fuji?

The 100th anniversary is a very important milestone and an opportunity to publicize our history, so we released this commemorative model. We started the project in 1978, with the help of Mr. Haruo Umeda, a famous essayist and fountain pen enthusiast. It has been more than 40 years since we started with the question of what an ideal fountain pen should be.

You will eventually leave your presidency to the next generation. At that time what legacy would you like to leave behind at that time?

I would like to be remembered as Nakata, a creator of “delicious fountain pens.” The expression ‘delicious’ is just a metaphor, but I would like to prompt customers to say, “the fountain pen today was delicious, I’d like to use it again,” with the current generation that could then be handed down to the next generation. In Japanese, we describe how smoothly we write not only as the feel of writing but also as the “taste” of writing. We would like customers to love and “taste” fountain pens at all times when writing and drawing. Even today, the Queen’s speech given at the State Opening of the British Parliament is recorded with tannin ink on vellum. Firstly, there was a so called “dip pen” where you loaded the pen by dipping the tip in ink, then a “plunger fountain pen” that has a type of pump installed inside the pen shaft to draw ink from the ink bottle, and then in 1956, the Platinum Pen succeeded in bringing into use cartridge fountain pens represented by the advertising slogan, “Good bye, ink bottle.” Bringing us to the present day, the number of people wanting to write with various ink tones by mixing them has increased, and the conventional plunger style or even dip pens of old have become popular. We have now the phenomenon of revival in fountain pens, which is different from reissued models being popular. Goods have two benefits, function and appearance, and I think you could say that today’s products have more or less fulfilled the function aspect. If anything, fountain pens fulfilled the function aspect quite a while ago and at present, more people feel psychological satisfaction with the analogue aspects that I just described. Therefore, I would like to keep sharing that “taste” with customers.