Working hand in hand towards a new era

Article - July 27, 2011
Colombia and the United States have built a strong, long-standing relationship based upon respect, cooperation, and common goals. 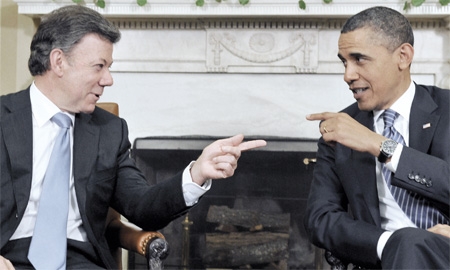 PRESIDENTS SANTOS AND OBAMA MET IN APRIL 2011 TO DISCUSS COOPERATION BETWEEN THE TWO NATIONS IN SECURITY, ECONOMIC AND SOCIAL ISSUES
SHARE

Some of the values both countries share are democracy, individual freedom and freedom of the press, the rule of law, economic prosperity, and the expansion of opportunities for all. Now is time for the next step.

When Juan Manuel Santos Calderon was elected President in August 2010, he took over the reins of a very different country than the one his predecessor Alvaro Uribe had inherited in 2002. Colombia’s transformation over the past decade has been extraordinary, and where former president Uribe was faced with the task of regaining control of conflict-torn territory, President Santos presides over one of Latin America’s most successful and prosperous economies, and a regional leader in peace, justice and security.

While continuing with Mr. Uribe’s pro-market economic platform and democratic security policies, President Santos’ path since taking office has differed from his predecessor’s in several ways.

Restoring relations with Venezuela and Ecuador, the new President has depolarized divisions within the country that marked Mr. Uribe’s presidency. He has also turned his attention to judicial reform, and launched a corruption probe into the national anti-drug trafficking agency.

He has worked to amplify the agenda with the U.S. beyond the free trade agreement, and has initiated important new legislation, such as the Victims’ and Land Restitution Law, which has been globally applauded.

In May this year, Congress approved the new anti-corruption law, hailed by President Santos as the most ambitious ever seen in Colombian Congress. Prohibiting the state from contracting political campaign contributors while the supported candidate is in office, the law aims to close the revolving door between public and private sectors.

Through this anti-corruption initiative, coupled with others in matters of security, Colombia has proven to be not only a regional leader, but a global trendsetter to watch.

President Santos has also made moves to ensure a more equitable distribution of the country’s mineral and hydrocarbon wealth through his ‘Prosperity for All’ national development program, while working to guarantee best practice and the protection of human rights. The President’s economic platform is focused on the sustainable development of five economic engines: agriculture, infrastructure, housing, innovation and energy, and targets annual GDP growth of 5%.