Plans are in motion to turn the small Latin American nation into a logistic hub for the region. Meanwhile the industrial base continues to strengthen and diversify 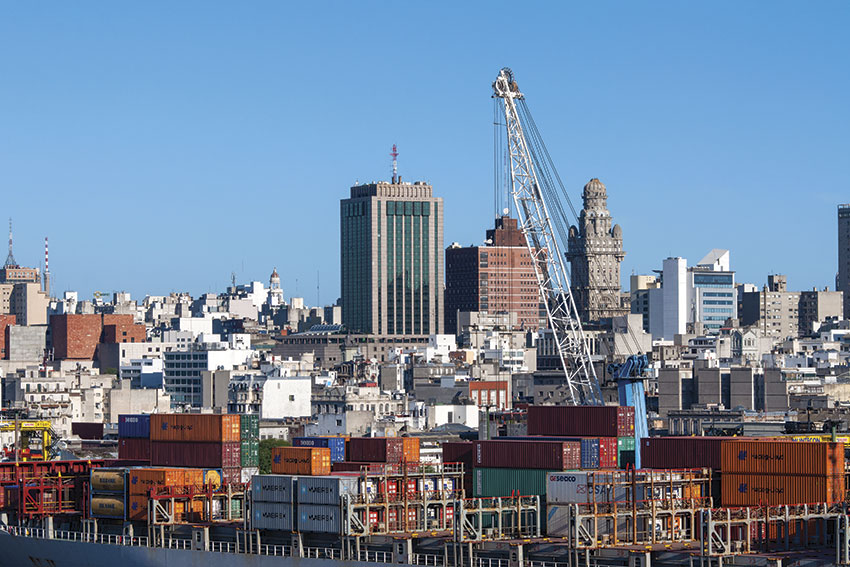 A small country nestled between South America’s giants, one may think that the economic fate of Uruguay is inevitably linked to that of Argentina and Brazil. But as its two big neighbors struggle, Uruguay soldiers on with its own narrative of discreet stability, legal certainty, investor-friendliness and macroeconomic discipline. The small country has clearly differentiated itself from its much bigger, instability-prone neighbors with sober policies that have enabled it to escape almost unscathed from the nearby turmoil.

Rodolfo Nin Novoa, the country’s Minister of Foreign Affairs, is well aware of Uruguay’s reputation for stability: “Here there is a lot of juridical certainty. This is an intangible value that is essential for us. Here contracts are respected and there are no surprises. And this is what allows us to be who we are in the region.”

Investors undoubtedly love the kind of stability that Mr. Nin Novoa talks about, but peace of mind is not enough if you are a tiny nation encircled by colossuses. Now it is time to look further ahead and to identify the ways in which the country can prosper in the midst of increasingly fierce global competition.

The answer lies partially in diversification. Uruguay has traditionally thrived on its lucrative agribusiness industry, which accounts for around 80% of the country’s exports (if we include both the agricultural products themselves and agriculture-based manufactured items).

Being a primarily agricultural country, manufacturing is still lagging behind in Uruguay. Furthermore, industrial activity has been falling steadily for the last few months. Putting the oil refinery sector aside, industrial activity in the first half of this year shrunk by 3.8% compared with the same period in 2015.

However, a deeper analysis reveals a more positive picture: beyond the latest setbacks, the country has made a consistent effort to reinforce and diversify its industrial base, especially thanks to the cellulose industry. The latter has multiplied its production by 20 in the last few years; it accounted for 1% of Uruguay’s total industrial output in 2006, and has risen to 13% today.

While cellulose has been the indisputable protagonist of the country’s recent industrial push, other manufacturing sectors have flourished, including non-alcoholic beverages, bread-based products, chemical substances, dairies and medicines. All of them are gradually displacing traditional Uruguayan manufacturing industries such as metallurgy and clothing. It is not the first time that the country has undergone a major industrial transformation. Back in the 1940s, a protected national industry emerged to cater to internal demand; three decades later, the situation changed completely and the manufacturing sector oriented itself to the international markets as a result of the signing of trade agreements with neighbors.

The latter formula has prevailed and, in today’s globalized world, greater emphasis has been given to those industries that go beyond the country’s borders, even if some sectors like beverages and bread are fundamentally bound for the internal market.

Efficiency also matters greatly, and those industries capable of achieving economies of scale are also the most successful. An interesting example of a major efficiency-oriented internal reform is that of the National Administration of Fuels, Alcohol and Cement (ANCAP), a state-owned multinational tasked with managing and administering some national monopolies and with importing, refining and selling petroleum-based products.

Last year ANCAP lost $198 million and now is busy reducing its expenditures. This process is being led by its President, Marta Jara, who, despite the organization’s difficulties, highlights the wide acceptance of ANCAP among her fellow citizens. “It is clear that, for Uruguayans, ANCAP is the country’s most important company due to its turnover, but also because this company is an engine for growth. ANCAP has the backing of Uruguayans, who have expressed themselves in plebiscites in favor of ANCAP staying in the hands of the state”. This popular trust, however, could evaporate if there is a perception that ANCAP is being mismanaged by the authorities.

The national administration is aware of the need to further develop and diversify the country’s manufacturing base, and has launched different support schemes. The government’s industrial fund, for instance, is allocating $30 million to different small and medium industrial companies, especially to those which are seen as most capable of associating with other companies and those that are located in strategic industrial clusters. Priority is given to cutting-edge sectors such as biotechnology, nanotechnology, electronics and software, but also to more traditional sectors like the chemical, pharmaceutical, naval, automotive and paper industries.

All the aforementioned efforts are giving rise to a new industrial reality which can make the country more competitive and lay the foundations for Uruguay’s transition to a research-focused and knowledge-based economy. However, these new industries are not labor-intensive and therefore are failing to create sufficient employment.

In the first semester of 2016, employment in the Uruguayan manufacturing industry fell by 7.3%, something that can easily be blamed on a mismatch between the requirements of the new industry and the profile and preparedness of Uruguay’s industrial workers, whose training and abilities are evolving at a slower pace. This scenario is potentially damaging, as an increasingly sophisticated manufacturing sector could easily become a scapegoat for transitory evils that often occur during major industrial transformations.

In sum, Uruguay’s industrial revamp presents plenty of opportunities along with some threats that must be tackled well in advance. However, the country is envisaging other sources of future economic prosperity. A lot of attention is going to the logistical business, a sector where Uruguay has huge potential.

Aside from its strategic location, its proximity to massive exporters and favorable natural conditions, the country has a legal regime that is very advantageous for companies wishing to use the country’s ports to send their produce across the world: cargo can move freely inside port customs facilities without the need to obtain special authorizations, and is exempted from import duties.

“The Omega Project plant has a great added value for us because, once the investment is written off, the cost of power generation will be very low”

Néstor Gómez Alcorta, President, Efice
“It is clear that, for Uruguayans, ANCAP is the country’s most important company due to its turnover, but also because this company is an engine for growth”

In addition, the authorities are undertaking major infrastructure development projects to ensure that the country’s ports increase their capacity and are capable of handling an increasing volume of cargo. Last year the government called for international tenders for the construction of logistical infrastructures under a public-private partnership regime.

Uruguay is also striving to become a regional telecoms hub. Antel, the country’s main operator and the first Latin American company to launch a commercial 4G/LTE network, has a lot to do with this ambitious endeavor. Antel is working with global leaders such as Google to build a submarine cable connected with the U.S. Around 80% of the Internet contents consumed by Uruguayans are expected to circulate through the cable.

Until now, Uruguay has been using cables ending in some neighboring countries, because it lacks one of its own. This project, to be completed at the end of 2017, is meant to be a game-changer. “It represents a new degree of sovereignty, because nowadays sovereignty depends on being connected. It also represents freedom and independence from prices established by other companies which can limit the country’s development in this field. Having a lot of capacity at a cost that is decided by our country gives us the chance to develop more services without depending on other companies or countries,” Antel President Horacio Andrés Tolosa explains.

Antel has also developed a massive high-security data center that is servicing other companies. This reflects a growing trend, as most companies, instead of having their own data centers, which are expansive to maintain, rely on big-scale facilities such as this one. This, coupled with the cable, will enable Uruguay to become a regional telecoms hub, as many international companies are expected to make the most of both facilities and choose Uruguay as the headquarters of their South American business. In addition, improved Internet facilities will lend themselves greatly to national development, and could help Uruguay reach 100% connectivity by 2020, as Mr. Tolosa expects.

Beyond the necessary innovative measures adopted by Uruguayan companies, one thing is clear: the world must be their market. They cannot rely solely on internal demand, nor can they depend on a regional market that is highly volatile. Fortunately, Uruguayans have been aware of that necessity for a long time, and the country’s exports do not entirely rely on its immediate neighbors or on Mercosur, South America’s largest trading bloc.

“We are doing a great job inside and outside Uruguay in having access to markets without tariff restrictions, because tariffs cost us a lot of money. Mercosur has ceased to be Uruguay’s main market, as less than 22% of our exports go to Mercosur,” says Minister Nin Novoa.

Minister Nin Novoa is also adamant that a small country like Uruguay must not try to compete in terms of quantity in the international markets. Instead, it needs to strive for the maximum quality and competitiveness. “We have some competitiveness issues related to the cost of producing each unit, and that is something we need to improve, because there are some grey areas there,” the Minister admits.

Some companies are already implementing far-sighted cost-saving process in their industrial production as a means of remaining competitive. An interesting case is that of chemical group Efice, which is transforming its productive system and has launched new plant called Omega that is capable of tripling the company’s output while drastically reducing electricity consumption.

This matters hugely not just for the company but for the country, as Efice is Uruguay’s largest energy consumer. “The Omega Project plant has a great added value for us because, once the investment is written off, the cost of power generation will be very low. During the first 10 years almost all energy billing will go to repay the investment, but after that we will see an 80% reduction in our energy cost,” says its President, Néstor Gómez Alcorta.