The emerging voice of Africa

Article - December 19, 2012
Encouraged by successful reforms, investors are aiding Nigeria along its path of economic development and diversification 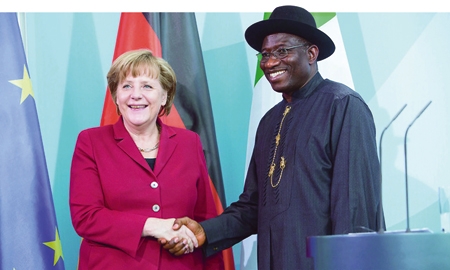 As Africa’s most populous country and with a host of natural resources at hand, Nigeria has steadily built on its position as a standard bearer for the continent as a whole.

Under President Goodluck Jonathan and his People’s Democratic Party (PDP), this country of 170 million has forged for itself a key role on the international stage as it looks to build on its reputation around the world.

With steady GDP growth averaging at around 7 per cent over recent years, along with the recent implementation of a more prudent fiscal plan and a steady relationship with both Western powers and countries such as Russia and China, Nigeria remains one of Africa’s most prominent players. And although the global economic climate has affected the country, income from relatively steady oil prices have helped Nigeria to continue to develop and improve.

Over 80 per cent of the government’s revenue is derived from oil-related products and services, while 95 per cent of its foreign exchange earnings also comes from this sector. Inevitably, the global slowdown has hit the country’s oil-related income over recent years. However crude oil output has remained steady recently at around 2.4 million barrels per day.

The country is keen to attract foreign investment and President Jonathan has repeatedly stressed his desire to create attractive economic conditions to achieve this. Nigeria’s economy has also been boosted by new avenues for expansion, including the telecommunication, banking, construction and manufacturing industries. These areas are all expected to deliver opportunities for growth, with the country’s banking and telecommunications sectors seen to offer particular potential.

Nigerian financial organisations are already broadening their scope to new territories. Seven lenders have moved in to Ghana, while the requirements of the oil industry are likely to provide further opportunities. The telecommunications industry has also seen recent investment, with South African firm MTN spending $3.1 billion on upgrading its mobile network in the country, an example of the direct investment being made to build and improve upon Nigeria’s infrastructure.

With non-oil sector growth expected to help drive economic expansion, the government has also focused its attention on policy reform plans, including an increase in capital project budgets across a number of sectors. And while many of the hopes around these sectors have failed to live up to expectations in previous years – largely due to ongoing problems around infrastructure and administration – President Jonathan’s pro-active approach to reforming public sector and dealing with corruption is beginning to be seen to have a positive impact.

The country’s leader has already asked Nigeria’s anti-corruption agency to look into claims that illegal fuel subsidy payments are being made, estimated at $6.8bn, while he is also hoping to drive home reforms in the domestic electricity supply market – a key requirement for future growth – by involving private companies to develop the country’s network.

Importantly, the President has also been refocusing attempts to deal with the ongoing problems with Islamic fanatics Boko Haram in the north of the country.

This area has suffered from high unemployment and underdevelopment, leading to President Jonathan appointing new staff and adopting a new stance towards reforming the area to reduce social tensions and improve the local economy. These tactics are seen as a positive step in moving towards a more stable political set-up, and helping to ensure the country’s progressive economic stance remains in place.

A new minimum wage is also being introduced to help the lowest paid sectors of Nigeria’s workforce. Although this – along with funds put into failing banks – has caused inflation concerns, with the figure expected to remain stubbornly high at around 9.6-12.7 per cent over the next three years, the government intends to try to control this through a close focus on monetary and fiscal policy.

These actions have brought extended international attention to President Jonathan, who will remain in power until 2015 after he won the national elections on 16 April 2011, which were widely commended for their transparency and fairness.

Following that victory, German Chancellor Angela Merkel visited Abja in 2011 to congratulate Mr Jonathan (becoming the first head of state of a major world power to visit the country since President Jonathan’s re-election), and Nigeria’s leader returned the visit, travelling to Berlin in April 2012. The two countries are currently set to inaugurate a bi-national commission which will strengthen economic, security and diplomatic ties. There are also hopes that German companies can increase their investments and involvement in Nigeria’s liquified natural gas industry, among others. The African country has the world’s eight-largest reserves, with much of the resource relatively underdeveloped due to a focus on crude oil production, leaving the nation keen to involve foreign partners to develop the industry.

With such relationships abroad, and with a cohesive and forward-thinking plan of action for the country itself, Nigeria is continuing to attract investment and interest from companies and leaders based around the world. Add plans to build and improve all areas of the country’s economic, political and social spheres, and Nigeria is well-placed to continue enjoying its prominent position as Africa’s leading nation.