The Big Apple or The Big Smoke?

New York displaced London for the first time in 2014 as the world’s financial capital. In the ranking compiled by the Global Financial Centres Index (GFSI), the City’s reputation suffered from a series of scandals, including banks’ abuse of clients and the manipulation of interest rates and other financial benchmarks. Has London lost its “mojo”? 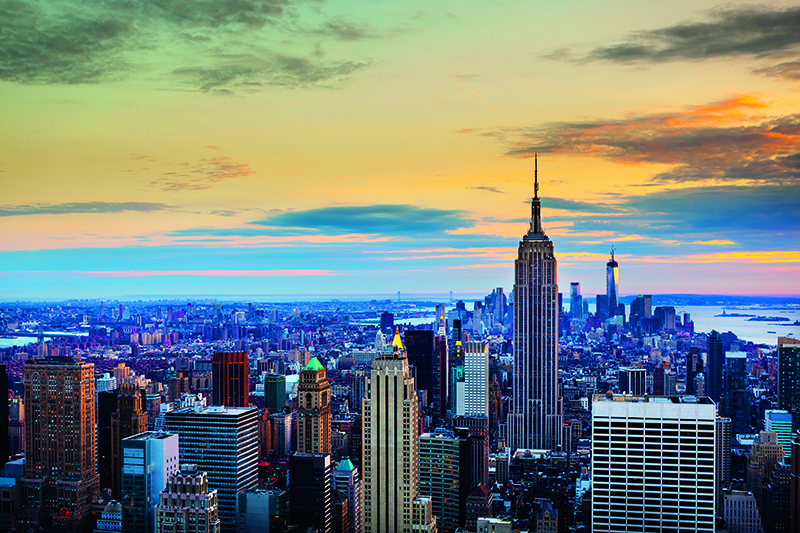 The GFSI survey of more than 3,500 fi-nancial services professionals from across the globe showed New York nudg-ing past London by just one point on a 1,000-point scale. The ranking evaluates 83 of the world’s top financial centers in five categories of competitiveness: busi-ness environment, financial sector de-velopment, infrastructure, human capital and reputational and general factors.

New York won the twice-yearly sur-vey in March, 2014 and again in October, raising concerns about the future of the City in the rapidly evolving landscape of global finance.

In the most recent poll, the index’s authors blamed London’s slide on “uncer-tainty over the UK’s position in Europe, regulatory creep and the UK appearing to be less welcoming to foreigners.” But the report also showed a number of impor-tant long-term trends that could well play out in Britain’s favor in the years to come.

If London has lost a bit of its sheen as a global banking, insurance and securi-ties trading powerhouse, it comes against the backdrop of prolonged economic stag-nation and uncertainty in Europe, which continues to suffer from a malaise that has no doubt rubbed off on the continent’s leading financial market. In the United States, by contrast, the clear direction provided by the Fed, the surge in income from shale oil and gas production, and the sustained growth in the job market and consumer spending has pushed its lead-ing stock market indices to record heights.

Dominated by major U.S. corpora-tions, the Dow Jones Industrial Average has posted a six-year string of impressive gains, briefly topping 18,000 last year, a historical record. The Dow’s winning run represents a dramatic turnaround from the financial crisis, during which it fell below 7,000, or more than half of its pre-crisis value. The broader U.S. benchmark S&P 500 posted its third straight year of gains and closed above 2,000, more than twice its level during the historical mar-ket downturn of 2009.

New York’s financial industry has been a major beneficiary of the Fed’s commitment to historically low interest rates, which has prompted investors to plow large amounts of money into stocks.

Its flagship exchange, the NYSE, remains heavily concentrated in U.S. corpora-tions, which account for the lion’s share of its nearly 1,900 total listed companies and massive $16.6 trillion total market capitalization. Equity trading and initial public offerings on the New York Stock Exchange have seen a similar resurgence and continue to be its dominant niche in global finance. In 2013, for example, the NYSE led in global initial public offerings and capital raised with 157 transactions raising $59 billion in proceeds — more than the next three exchanges combined, according to its annual report.

The NYSE continued to dominate in 2014, bolstered by Alibaba Group’s $25 billion listing priced in September 2014, the largest IPO on record. New York’s two main stock exchanges, Nasdaq and the NYSE together in 2014 raised more than $80 billion in initial public offerings, ac-counting for more than 40% of the global total, according to Dealogic. That sum that roughly triples the total raised in London last year.

Counting over 2,400 companies from more than 90 countries with a combined value of over £4 trillion, the London Stock Exchange represents a more diverse and globally integrated market than its coun-terpart in New York. The City continues to hold a dominant global position in currency trading and over-the-counter interest rate derivatives, and its capital markets also benefitted from the continu-ing upward trend in the global economy. The FTSE 100 rebounded strongly since bottoming out at around 3,500 in 2009. London’s closely-watched benchmark finished 2014 about 300 points below its historical high of more than 6,900, set in 1999. The LSE ended the year with im-pressive gains in both the total number of trades and the overall value traded, which climbed by 94% and 109% respec-tively for the year.

After several years of declines, the LSE’s UK order book bounced back in 2014 with 21% growth in average daily trades. Looking at the longer-term pic-ture, the value of trades on the LSE’s pan-European Turquoise Equity platform has climbed by more than 43% since 2011, while volume grew by more than 44% during the same time and now surpasses its UK order book in terms of average daily volume. LSE Group’s MTS Repo mar-ket remains its most heavily traded busi-ness in terms of value, with nearly £238 million being transacted in 2014, up from about £212 million in 2011.

The finance industry in London and New York also remain heavily intercon-nected and interdependent. For example, Atlanta-based Intercontinental Exchange Group, owner of the NYSE, draws its two largest revenue streams from ICE Brent Crude futures and options contracts and U.S. and European cash equities on the network of exchanges it operates. LSE Group, for its part, has established itself as a leader in small-cap stocks, emerging as Europe’s technology startup hub. Its purchase of Seattle-based Frank Russell Company, owner of the benchmark Rus-sell 2000 index, represents a deeper foray into the territory of technology-heavy small cap stocks. The $2.7 billion pur-chase, completed in June 2014, will help to transform LSE’s balance sheet, bring-ing in more than one-third of its total in-come from the United States, a total that will surpass its revenues derived from the UK and Europe, according to an in-terview with CEO Xavier Rolet published in The New York Times.

Both financial sectors continue to serve as critical hubs in their respective areas, and both have risen from the ash-es of the financial crisis to assume their traditional roles at the centre of global finance. Their continued importance to the global financial system is a testament to the unique ecosystems that have devel-oped around the cities themselves, which house the myriad relationships and the complex infrastructure that underpins the global economy. They offer the talent and expertise, as well as the heavy con-centration of support and service busi-nesses that major banks and multination-al corporations desire.

A 2014 study on Global Mobility and Employment preferences by the Boston Consulting Group placed London and New York at the top of its ranking of global talent hubs. Despite its size and maturity, London ranked 26th in the Brookings In-stitution’s 2014 Economic Performance Index of the 300 Largest Metropolitan Economies. More billionaires call New York home than any other city in the world, according to Forbes, which gave London the top spot in its 2014 ranking of the world’s most influential cities, thanks to its large volume of foreign direct invest-ment transactions, interconnectedness to global air travel hubs, and the number of Forbes Global 2000 companies headquar-tered in the city. New York came in at a close second, despite being home to more major global company headquarters.

By various measures, New York and London continue to dominate the global finance and business landscape, and re-main indispensable to the world econ-omy. Yet the Global Financial Centres Index has shown some worrying trends for the two giants. When the survey be-gan back in 2007, the divide between London and New York, and Hong Kong and Singapore, their closest competitors, stood at nearly 100 points. In the most re-cent index, that gap fell to just 22 points. The study’s author called it a “landmark change in perception,” and said “the top places are vulnerable.”

Providing further evidence of the gradual erosion of the established finan-cial order, all of the top ten Western Eu-ropean centres saw a decline in their rat-ings, as did 23 of the 27 European cities included in the survey. Emerging hubs in Eastern Europe and Central Asia, includ-ing Istanbul, Almaty and Prague all saw their ratings improve, while cities like Taipei, Beijing, Manila and Mumbai also made significant gains.

“Competition these days is coming from non-traditional markets,” U.S. Secu-rities and Exchange Commissioner Daniel M. Gallagher noted in a Jan. 2015 speech in Washington D.C. “This is the case with Middle Eastern and Asian markets that did not experience the full brunt of the financial crisis, nor the resulting regulatory over-reaction prevalent in western coun-tries. Instead, they have been spending the past decade enhancing the competi-tiveness of their markets.”

The Commissioner went on to list a series of indicators that have officials on both sides of the Atlantic wringing their hands, including the historic low score assigned to the competitiveness of U.S. primary markets by the Committee on Capital Markets in November 2014 and the low rates at which foreign companies are now choosing to raise capital through U.S. public markets.

Despite their comparatively smaller size, in 2014, Asia-Pacific markets had more companies go public than any other region, with 546 IPO listings, including five of the largest ten global deals, according to Ernst & Young’s 2014 Global IPO Trends.

“Even ancient countries are re-think-ing their role in the global financial mar-kets,” the Commissioner explains. “For example, the Turkish government is estab-lishing the Istanbul International Finan-cial Centre with an ambition for Turkey to rank among the world’s top 10 economies. Likewise, the Governor of Tokyo is deter-mined to make Tokyo an international fi-nance centre. Last May, the metropolitan government held the first meeting of what they call the Tokyo international financial centre study task force, which is comprised of a group of financial experts and govern-ment officials that will examine various issues, such as the easing of regulations. In Spring 2009, the Chinese government an-nounced its goal for Shanghai to become an international financial centre by 2020. Consequently, the Chinese government established a free trade zone in Shanghai in 2013 where, among other things, restric-tions on foreign investment are eased.”

But while these trends have caused concern, there is reason for London to be hopeful about its place in global financial marketplace of the future. Its unique his-tory and geographic location have tradi-tionally led it to look outward to maintain its relevance in an evolving world econo-my, while leaning on its well-established legal and regulatory infrastructure. Lon-don continues to be a preferred destina-tion for IPOs for companies in emerging markets in the Middle East and Africa, has also become home to the first clear-ing bank outside Asia for the renminbi (the Chinese official currency) and has become itself as a leader in the growing field of Islamic finance. Its importance as the world’s biggest foreign exchange market owes itself in part to its central position between eastern and western markets, allowing traders to interact with their counterparts in Tokyo or New York during normal business hours. And while its institutions may not rival the massive investment banks in New York, it does have a deep pool of banking assets, half of which are owned by foreign banks.