Through its pioneering technology, Thaicom has brought broadband Internet and satellite television to millions of homes and businesses around Asia, setting a benchmark with its innovative solutions and contributing to industry and society at a global scale 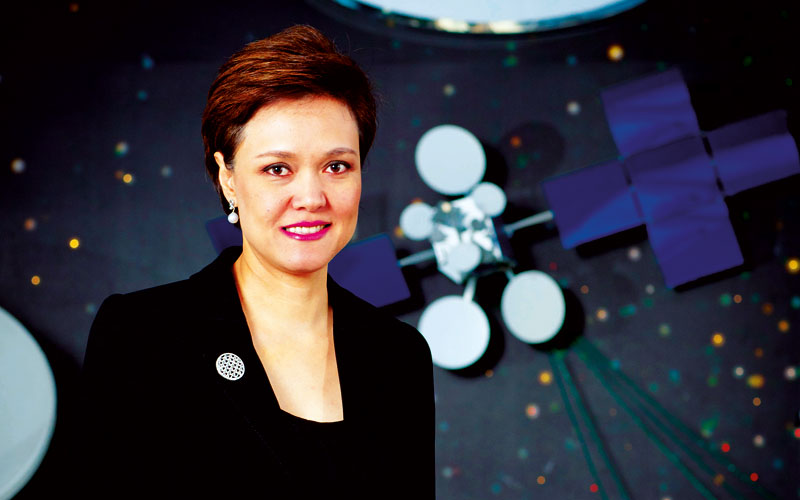 “THAICOM PLAYS AN IMPORTANT ROLE IN THE NATIONAL AND REGIONAL ICT SECTOR. WE ARE PRESENT IN ALL COUNTRIES IN ASIA, INCLUDING AUSTRALIA AND NEW ZEALAND. WE HAVE EXTENDED OUR COVERAGE TO AFRICA, AS WELL” SUPHAJEE SUTHUMPUN, CEO OF THAICOM
SHARE

Back at the dawn of the new millennium, Bill Clinton – then President of the United States – optimistically challenged members of the Asia-Pacific Economic Cooperation (APEC) forum to “turn the digital divide among and within our nations into digital opportunities”.

Fourteen years later, while the “digital divide” that Mr. Clinton referred to still very much exists, bearing in mind the surprising fact that three out of five people in the world still do not enjoy access to the Internet, the state of international connectivity has undoubtedly improved.

Today, with only a few exceptions, nearly every developing country now has some form of competitive market for broadband services. However, amongst global problems such as certain cultural barriers and high costs that impede Internet access, the difficulty of laying the infrastructure necessary for greater connectivity – especially in remote areas – remains one the greatest hindrances to Internet development over the world.

So when President Clinton posed his challenge to APEC forum members in the year 2000, little did he know that almost a decade earlier, the forward-thinking nation of Thailand had already begun laying the foundations for a future solution.

In 1991, with the digital revolution by then in full swing, the newly formed public company of Thaicom was bestowed its name by King Bhumibol Adulyadej of Thailand as a symbol of the linkage between Thailand and modern communications technology, and was swiftly awarded a 30-year concession by the government to operate the national satellite project.

While the company at first became most well known for its satellite television broadcasting services, of which today it hosts approximately 600 channels available throughout the region, in 2005 Thaicom broke new ground.

With the launch of its fourth satellite, Thaicom 4 (or IPSTAR) became one of the largest commercial satellites and the first ever broadband satellite in Asia-Pacific, facilitating two-way broadband connectivity and cost-effective solutions for communities and businesses lacking access to terrestrial line infrastructure.

“IPSTAR was the first hybrid Ku-/Ka-band satellite of its kind in the world,” explains Suphajee Suthumpun, CEO of Thaicom. “At that time, nobody actually believed that a small country like Thailand could produce this sort of new technology.

“Today Thaicom plays an important role in the national and regional ICT sector. We are present in all countries in Asia, including Australia and New Zealand. We have extended our coverage to Africa, as well.”

Indeed the breadth of IPSTAR’s geographical reach, covering an area inhabited by 3.2 billion people, is staggering. In the process, through the complex technological advancement of a two-way satellite system, it has been able to bring the joy and enlightenment of broadband Internet to millions of people who may never have had the chance.

In fact, thanks to the leading role of Thaicom, as well as a major effort by the Ministry of Information and Communications Technology (MICT) to promote broadband services, people in Thailand are now more connected than ever before.

The Thai Internet market has been on a significant growth path over the last number of years, with the demand for Internet and Internet-related services finally beginning to increase. For example, when Thaicom launched its IPSTAR satellite in 2005, overall broadband penetration in Thailand stood at a measly 0.75% (calculated by the National Broadcasting and Telecommunications Commission).  At the last count in 2014, this had grown exponentially to 7.63%.

While this is an impressive growth rate, the development of high-speed access has really only just begun in Thailand, and it is clear that the surge in services has been occurring from a relatively low base.  However, with demand expected to continue its rise throughout Thailand and the whole region, Thaicom is carefully planning its growth strategy.

Having recently restructured the company to make it more “customer-centric”, says Mrs. Suthumpun, as well as offering a broader range of solutions across its satellite services, a major part of Thaicom’s expansion will be in its fleet number.

The company has already successfully launched two more satellites this year from Cape Canaveral in Florida. Thaicom 6 was launched in January (having already sold almost all of its capacity to Indochina with some quota for Africa), while Thaicom 7, which started its journey into orbit and sold out on its launch date in September, will further help expand the company’s broadcasting service platform and a full range of media and data services tailored to the communication needs of the entertainment industry and telecom operators across Asia and Australasia.

“Our new bird will help fulfill the increasing demand in satellite capacity in Thailand and in the Asia Pacific region, help strengthen the company’s servicing capacity, as well as allow it to expand into new markets overseas,” says the CEO.

She also reveals that Thaicom is today working on its eighth satellite. “If things go well, it should be launched by the first half of 2016. We are also building a case for IPSTAR 2.”

In the meantime, the company’s main objectives are profitability and sustainability. “Transparency and accountability are key to this goal,” explains Mrs. Suthumpun. “Since I joined Thaicom in August 2011, we have managed to maintain a proven performance of 12 consecutive profitable quarters.” Also during this time, Thaicom has managed to regain its spot as the number one provider for broadband satellite in Asia in terms of market share.

Such fantastic financial performance has not only led to the company scoring a 100% satisfaction rate from its shareholders at the recent Annual General Meeting, but also being on the receiving end of international recognition. For example, Finance Asia recently granted Thaicom with Thailand’s ‘Best Mid-Cap Company’ and ‘Best CEO’ awards.

While recognition for its business success is a further boost to Thaicom’s brand, the company – most widely known for its pioneering history – went one step further this year to ensuring that Thaicom will continue to be one of the most talked about firms in Asia’s ICT industry.

That is because in June, Thailand’s leading satellite operator struck a deal with the country’s number one low-cost airline – Nok Air – to become the first in the Asia Pacific region to introduce commercial In-Flight broadband connectivity. The announcement came at the same time that Thaicom launched its New Frontiers campaign, which will see it expand its focus to include end-to-end satcom mobility services for air, land, and sea vehicles.

From New Frontiers to the forefront of ‘disaster management’, Thaicom has also won universal praise for its vital role in Asia at times of natural calamities. Evidence of this was seen when a huge earthquake and tsunami hit Japan in 2011. Thaicom’s IPSTAR satellite – designed to put communication networks back online in the event of such disasters – immediately became a key enabler for emergency response and humanitarian aid operations during the aftermath, resulting in the company being awarded by the Japanese government for its services rendered during those trying times.

Already one of Asia’s most well known and successful companies thanks to its innovation, profitability, and work to bridge the world’s digital divide, such an invaluable contribution to society as saving lives, on top of brightening minds with the power of information, can only help Thaicom’s great reputation grow even stronger.