SRS Aviation- The Beginning of Things to Come

Article - January 24, 2012
Panorama Reports talks to Ms. Sibongila Sambo, CEO of SRS Aviation, who dreamed of flying as a little girl and later made it happen against all odds. 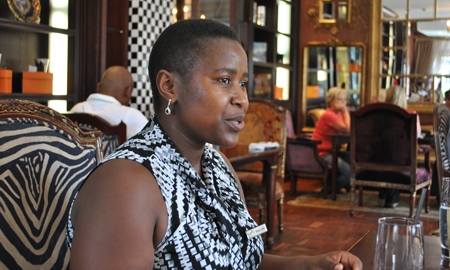 Some twenty years ago, a young girl stood on Bushbuck Ridge on the eastern coast of South Africa and watched the passing aircraft as they flew overhead.

Dreaming that she would one day be able to travel by aircraft and see the world, Sibongile Sambo has achieved what many would have conceived as impossible.

As the first black woman to operate an aviation company, the South African entrepreneur has lived through some of the greatest changes experienced by any single country. Recalling her memories as a child she said;

“I’ve always loved airplanes – I wished that one day I would have access to these machines that would fly by.”

With the ambition of being involved in the sector, Ms Sambo had originally applied to become cabin crew, however was turned down due to her height.

Undeterred she was inspired by the ANC’s proactive encouragement for social change, and after reading a manifesto on creating your own business, she did just that.

SRS Aviation was born and after securing a government contract, assisting in providing humanitarian aid to various countries throughout the continent was able to diversify into providing bespoke air travel as well as logistical solutions.

With the understanding that the development of Africa’s macro economy hinged on the ability to trade and create infrastructure, this boutique aviation company has expanded from not just providing transportation services but further into spare parts and ground services.

“Going forward, diversifying our industry in providing parts and services has been of great benefit,” she stated.

In keeping with the government’s agenda, Ms Sambo has been highly active in aligning herself with the current administrations agenda.

“There are gaps in the industry – we have a brain drainage when it comes to the sector. My government is working very hard to ensure a broader range of qualifications in the sector, and in turn allow for more South Africans to have the chance to work within the industry.”

Since joining the BRICS nations, South Africa has been offered both opportunities and challenges. As a fully authorised aviation firm that is regulated by the South African Aviation Authority, which in turn is acknowledged by the CAA and FAA, SRS is licensed to operate a broad range of aircraft, ranging from helicopters to commercial cruisers, manufactured by companies such as Airbus and Boeing.

The opportunities clearly lie in the capacity for business. South Africa is acknowledged as a gateway to the greater continent meaning that much of the foreign direct investment will require a base and in turn logistical transport solutions to facilitate business.

The challenges remain in the ability to provide up to date equipment, as well as hedging against the currency fluctuations of the U.S Dollar/ Rand.

“The rand dollar exchange rate obviously affects our business – we are careful to hedge against currency fluctuation. We hope that the Central Bank will be able to control inflation.”

While many companies are looking to invest in South Africa, small medium enterprises such as SRS are keen to expand into the global markets. Following a recent trip to China, Ms Sambo is already looking to capitalise in the international markets and take advantage of the logistical operations, which will be required from the broader community.

“We are interested in various foreign markets – we are looking into China, Europe, the United States and of course Africa as a priority.”

Despite Ms Sambo’s humble perception of her pioneering efforts, it has certainly not gone un-noticed by the business community at large. Acknowledged by Fortune Magazine as “Leader of Tomorrow” in 2008, as well as awarded with numerous other domestic awards, her efforts and success have been an inspiration to South Africa’s progressive generation.

“When I started to read about the new policies on women’s rights and total equality, I saw it as an opportunity to create something which was my own. I remember thinking this is where I belong. I can promise you, this company is different – our awards have not only given confidence to our investors, but also provided inspiration to a nation.”

In a country where only two decades ago the thought of a black person operating a private enterprise would have been impossible, let alone a black woman, Ms Sambo is the epitome of South Africa’s future. As she was inspired watching Mandela walk from prison a free man, so shall a generation look to her achievements and realise that given enough passion and hard work, impossible is just a word.