Article - April 30, 2014
The ‘mothership’ of the group companies, DH Corp’s wide-ranging investments have put both corporation and country on a strong growth path 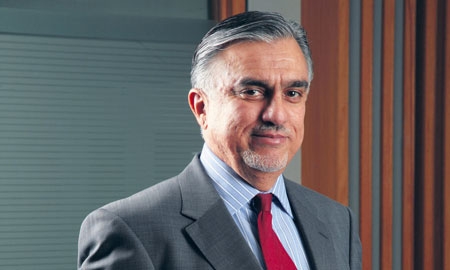 Pakistani Prime Minister Nawaz Sharif has pledged to transform the country into a peaceful and economically viable state. The first democratic transition of power in Pakistan has already awakened investor confidence. But, investors are wondering, which businesses are already poised to help to create this new beginning?
Dawood Hercules Corporation Limited (DH Corp) is the flagship investment holding company of the Dawood Group. With an investment portfolio comprising IT, real estate, energy, financial services, food, textiles and manufacturing, among others, DH Corp has a finger in every pie.
“The Dawood Hercules Group has always invested in Pakistan and if indeed we are the largest conglomerate, then this has been achieved though our commitment to ethical business practice and to making new, often groundbreaking investments in sectors which have not been invested in previously,” says DH Corp CEO, Shahid Hamid Pracha.
“This is not always easy in Pakistan, but we understand the risk and opportunities of this market and have built up a credibility with investors and business partners which enables us to raise capital and mitigate risk more effectively than others.”

In the first half of 2013, the corporation saw profits skyrocket a whopping 222 per cent from 2012. The group’s nine month consolidated accounts ending September 2013 show that after-tax profits grew more than three times, which Mr Pracha says is still below potential as Pakistan’s energy shortages are not fully resolved.
Yet Engro has done well with the resumption of gas supplies to its new 1.3 million-tonne urea plant, thanks to what the CEO calls “the new government’s commitment to resolve gas distribution issues more equitably.”
“As this trend continues, we should be comfortably deleveraged in the next two to three years and can hence plan for growth,” predicts Mr Pracha.
“Our strategic partnerships are with some of the leading international names in the game who only do business with people they trust. Building business trust and capability – these have been key for us and we hope through these to become a role model for the private sector and for growth in Pakistan.”