Article - December 18, 2012
The maritime sector has become one of the priorities of President Goodluck Jonathan’s government in its race towards economic diversification 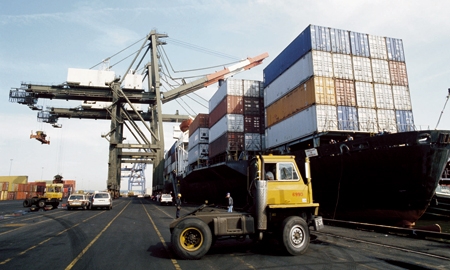 In early November, the partial privatisation of the Nigerian Navy-owned shipyards in Lagos was introduced. The move comes from the commitment of President Goodluck Jonathan to fully develop the country’s maritime industry, which is deeply attached to the oil and gas sector, making them two of the country’s most prominent sectors. “The maritime industry has helped to enhance Nigeria’s position as a regional leader in several areas because it is a major engine of national growth,” says the President.

Indeed, according to Ify Anazonwu-Akerele, Director General of the Nigerian Chamber of Shipping (NCS), 95 per cent of activities in Nigeria involve the maritime sector. She says, “The maritime industry is only just waking up to the fact that it is a tangible part of national development and crucial to economic growth.”

Admiral Mohammed, military shipyard Superintendent in Lagos, ratified the privatisation agreement at the opening ceremony of the Oyot oil platform, which was built by the Nigerian National Petroleum Corporation (NNPC) and the Mobil Producing Nigeria (MPN).

He particularly stressed that the construction of the platform is the clear consequence of the synergy that exists between the dockyard, so far having been exclusively for military use, and the maritime industry. At the same time, he recalled the engineering company Dorman Long, which had asked the Nigerian Navy if the company could lease a space in the yard. That began the process of partial privatisation that had been suggested by President Jonathan.Meanwhile, Rear Admiral Ameen Ikioda, who represented the Chief of Naval Staff at the opening event, said the military shipyards were in charge of all of the process and construction logistics, as well as the commissioning of the rig. This has been a landmark in Nigeria, not only for the navy, but for the entire maritime industry; not excluding fishing.

That synergy alluded to by the heads of the Nigerian Navy may well give an idea of what was said by the Executive Vice-President of Dorman Long Engineering Limited, Henry Chukwuma Okolo, who, in addition, welcomed the results obtained by the partial privatisation of the military shipyards.

He urged the federal government to extend the boundaries of the local content policy to also cover strategic sectors such as energy and telecommunications infrastructure, since the policy pursued by President Jonathan has allowed Nigerian companies to participate much more actively than before in the sectors of gas and oil, two of the great natural resources of Nigeria. With the advance of the shipping industry, expectations will be greatly improved as far as exports are concerned.

According to Ms Anazonwu-Akerele, the Nigerian Local Content Act gives indigenous operators “first choice refusal” by “compelling the big oil companies to engage the services of Nigerians.” The Nigerian Chamber of Shipping “facilitates partnerships between foreigners and credible Nigerians. To ensure we have credible practitioners, the Chamber runs training courses, relevant publications, interactive sessions, all geared towards raising the level of awareness and establishing best practices,” she adds.

President Jonathan has recently insisted on the need to encourage local investment in all sectors of the country, and commended the Nigerian Army and his Chief of Staff, Vice-Admiral Ola Saad Ibrahim, for their efforts to protect the sea lanes and waterways of the nation, which will benefit the oil and gas industry, as well as the import and export process.

Transport Minister Senator Idris Umar highlights the potential of the maritime industry, saying: “It is important to note that the maritime sector of Nigeria, with over 84,000 square nautical miles, is central to the nation’s economy as a veritable medium of transportation, global commerce, resource exploitation and recreation.”

The push to enhance the sector opens the way for a variety of potential partnerships. For example, the Nigerian Port Authority (NPA) intends to use the Port of Hamburg as a role model of port development and sees German companies as points of reference in construction and engineering. The NPA has also identified German excellence in technology as an area where the two countries could partner and gain mutual benefit.