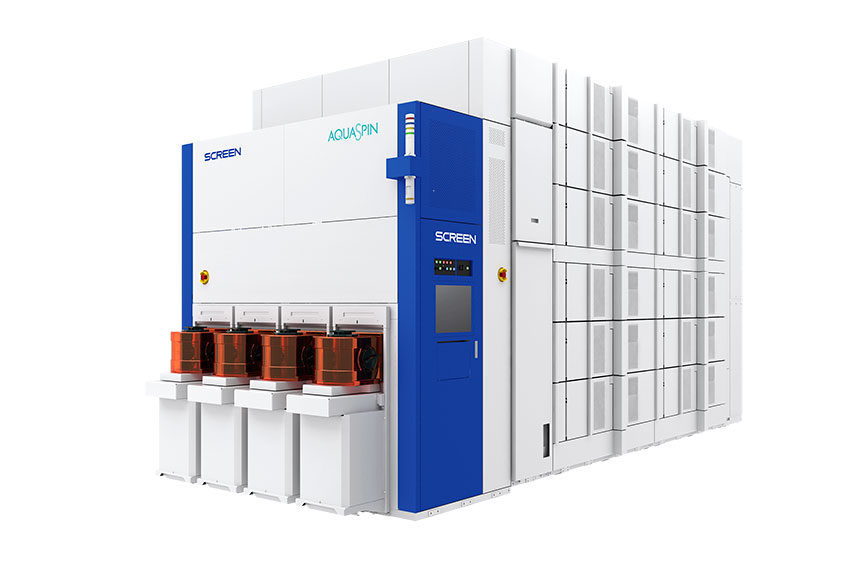 Both miniaturization and integration of the circuit patterns on advanced logic, memory and other semiconductor devices have progressed rapidly in recent years, requiring higher levels of particle removal during wafer cleaning processes than ever before. This has increased the need for high-throughput single wafer cleaning systems that combine superior cleaning performance with stable processing capacity.

However, as the demand for semiconductor devices increases, the industry as a whole is faced with the challenge of reducing the environmental impact created by its manufacturing processes. This includes improving energy saving during equipment operation and reducing the amount of chemicals used.

With the SU-3400, SCREEN SPE has downsized the cleaning chambers and adopted a new platform with six level, stacked towers. Even though the SU-3400 is equipped with 24 chambers, the same as SCREEN SPE’s conventional system,3 the new structure shrinks its footprint by 30%.

The SU-3400 also features an innovative wafer transfer mechanism that greatly improves its productivity per unit area. The new design helps the SU-3400 to achieve a practical processing capacity of up to 1,200 wafers per hour, placing it at the forefront of the industry.

In addition, improvements to the cleaning nozzles and use of a highly efficient chemical circulation system have substantially reduced the amount of chemicals needed. Similarly, the adoption of fully automated airflow control has significantly lowered the volume of air discharge. SCREEN SPE estimates these upgrades have reduced the SU-3400’s environmental impact during operation by as much as 20%.

The system also offers a range of other features, including monitoring of the inside of chambers with high-resolution cameras to ensure trouble-free operation. It is also equipped with various enhanced support and maintenance functions, such as malfunction detection that utilizes the IoT and big data analysis.

With its release of the SU-3400, SCREEN SPE has once again demonstrated its commitment to meeting the diverse needs of semiconductor manufacturers. As a leading producer of cleaning systems, it is tightly focused on ensuring the continuing growth of the industry.