Reforms inject foreign capital into the economy, though challenges remain

Argentina’s return to the global lending market has injected a shot in the arm into the economy. The next hurdles include reducing both the budget deficit and inflation 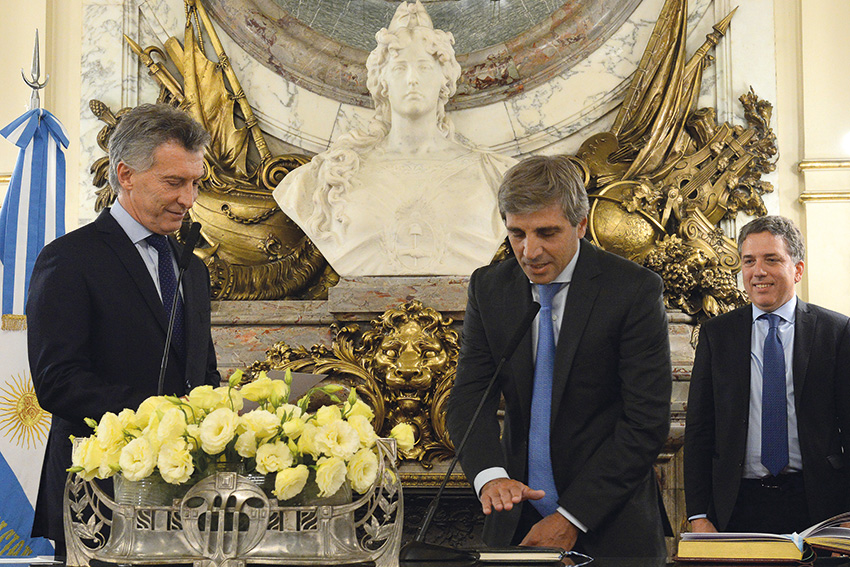 PRESIDENT MACRI (LEFT) SWEARS IN HIS MINISTERS OF FINANCE AND THE TREASURY, LUIS CAPUTO AND NICOLÁS DUJOVNE, RESPECTIVELY
SHARE

The news generated by Mauricio Macri’s business-friendly Cambiemos (“Let’s Change”) government since entering office in late 2015 have been warmly received by the international investment community.  The deal with holdout bondholders in 2016, and the anticipated 3-4 percent GDP growth for 2017 have enticed investors to make a move on South America’s second-largest economy.

However, Mr. Macri is finding it tough to navigate between supporters of rapid change and those worried about the political and social implications of going too fast.

While the administration has argued that its subsidy cuts and government employee layoffs were necessary to return to growth, critics and the opposition have responded with mass demonstrations and confrontations from trade unions. The resulting difficult political climate will put the Cambiemos coalition to the test as it faces voters in mid-term elections set for October.

Mr. Macri can look back with some satisfaction at results so far, despite a recent drop in his approval ratings. When elected, the fiscal deficit was at a preoccupying 5.4 percent of GDP, Argentina was isolated from global capital markets, its foreign reserves were depleting rapidly and economic growth was stagnant.

Early reforms included lifting foreign currency controls which allowed Argentines to access foreign currency at their will, striking an agreement with holdout bondholders which brought the country back to international capital markets for the first time in 15 years, and publishing credible economic statistics as a base from which to make sound fiscal and monetary policy.

Luis Caputo was President Macri’s envoy sent to New York to settle the dispute with the holdouts and take Argentina out of default. Mr. Caputo insists that the deal was a “game changer” for Argentina’s economy as it allowed national and provincial governments to borrow from abroad once again, allowing them to inject foreign capital into badly needed public infrastructure projects.  Immediately following the deal came Argentina’s successful sovereign debt sale of $16.5 billion.

The private sector later responded in April 2016 with Grupo Supervielle’s first foreign equity offering in two years for the country, when it launched its IPO on the New York Stock Exchange.  Corporate issues soon followed from other companies including Aeropuertos Argentina 2000 (AA2000) and Pampa Energía. AA2000 issued a $400m bond at 6.95 percent, the lowest rate of any Argentine corporation.

Next on the government’s agenda is to overhaul the “inefficient and unfair” tax regime and present a draft in June. “Our goal is to propose to the Congress in 2018 a tax reform that aims to have a simpler and more efficient tax system,” says Minister of the Treasury Nicolás Dujovne.

Other priorities include the now autonomous Central Bank’s fight against inflation, developing domestic capital markets, forging trade pacts, boosting foreign investment, whose levels that are far below those in other big Latin American countries, and helping small and medium-sized enterprises to export and integrate themselves in the global value chain. The number of SMEs selling abroad slumped to 6,000 last year from 15,000 in 2011.

“Our job is to develop enough credit, and to spread that credit among the SMEs,” says Finance Minister Caputo.

“Brazil is undergoing political turmoil at the moment, while Chile is second-guessing the policies that have been implemented in the past years. Mexico faces the Trump effect and Colombia faces its own challenges. Peru and Argentina stand out as being different”

Argentina has trade agreements with only 10 percent of the global GDP, while some neighbors have them with 90 percent, notes Horacio Reyser, Secretary of International Economic Relations at the foreign ministry.

IMF officials visited Argentina last September for the first time in a decade, and praised the government’s “ambitious and much-needed” reforms.

“Important progress has been made already in 2016. The peso is now market-determined and exchange controls have been essentially eliminated. The increase in utility tariffs has brought prices more in line with underlying costs. The settlement with creditors has allowed a return to international capital markets by both the private and public sector.

“Medium-term fiscal and inflation targets have been announced in conjunction with a transition toward a modern system of inflation targeting. Finally, the national statistics agency is being rebuilt, allowing for the publication of improved and credible statistics,” the IMF said in November.

Recent data shows Argentina is no longer in recession, and the IMF is forecasting 2.7 percent GDP growth this year, although inflation has accelerated since that forecast was made. In February, consumer prices rose 2.5 percent from January’s 1.3 percent, and may pick up further as additional power and gasoline subsidy cuts bite.

The Central Bank is targeting inflation of no more than 17 percent by end-2017, 8-12 percent in 2018 and 5 percent in 2019, when the government plans to have shrunk the still-gaping deficit to 2.2 percent of GDP. Its vice president, Demian Reidel, stresses the vitality of the institution’s autonomy to successfully curb and reduce inflation. “In the end, how credible the targets are depends on the autonomy of the Central Bank, among other factors. From a legal standpoint, this has been eroded as the previous government used the Central Bank to finance its spending” he says.

But pressure is building. Early this month, conflicts with labor unions erupted in the first general strike that the administration has faced, paralyzing transportation and productivity nation-wide for 24 hours.

The IMF sees potential problems ahead, saying the architects of economic reform “should be sensitive to its impact on growth, jobs, and the most vulnerable segments of the population.”

The OECD, too, while encouraged by the changes and forecasting good growth ahead, says that “downside risks from an unfavorable external environment and domestic challenges may affect the outlook. Sustained inflationary pressures could require a tighter monetary policy that could delay the recovery.”

“Poverty and inequality remain high by OECD standards. Investment growth has been stagnant, resulting in an important infrastructure gap,” it said in an end-2016 report.

Between 2015 and 2016, the number of Argentines living in poverty grew by 1.5 million, the Pontifical Catholic University of Argentina said in a recent report, putting pressure on the Macri administration to move faster on growing the economy. “Our goal of zero poverty has to do with our vision for the country: that true development is not achieved by economic growth alone, but with the added element of ensuring social inclusion,” explains Minister of Social Development Carolina Stanley, who calls for the private sector involvement in order to reduce the poverty rate, by creating jobs.

Minister Stanley has presented this argument at the Coloquio IDEA, a yearly gathering of the private sector hosted by the entrepreneurial advocacy group, IDEA. Although the private sector and the government in Argentina have historically been at arm’s length at best, or mired in crony capitalism at worst, some voices from the private sector today indicate the need to accompany development.  “We need to lift one-third of Argentines out of poverty not by populism or social welfare plans but by creating jobs for solid economic development and moving people out of the informal economy,” asserts IDEA’s president, Ignacio Stegmann, who is an SME manager himself. Delfín Jorge Ezequiel Carballo, Vice President of Argentina’s second-largest private bank, Banco Macro, sees high potential returns for foreign investors. “We have very attractive sectors for investors from energy, infrastructure, and logistics, where there has been minimal investment for the past 15 years.”

Nicolás Dujovne, Minister of the Treasury

Internationally, the recent changes make Argentina a source of good news for the region. “Brazil is undergoing political turmoil at the moment, while Chile is second-guessing the policies that have been implemented in the past years. Mexico faces the Trump effect, and Colombia faces its own challenges. Peru and Argentina stand out as being different,” says HSBC Argentina’s President, Gabriel Martino.

Government challenges include improving productivity and foreign sales if investment and exports are to become the key economic growth drivers instead of consumption, as was the case during Cristina Kirchner’s presidency, he says.
“If Chile exports $50 billion worth of metals, why can’t Argentina do the same, given that we share the Andes Mountains? The same happens with food and energy—we used to export gas in the 1990s and we are now importing it,” adds Mr. Martino.

Finance Minister Caputo acknowledges it may be hard for Argentines to think in a long-term basis while their day-to-day life is becoming tougher.

“As the economy starts recovering and people realize that all the measures we have taken were for their benefit, they will have it easier at accepting we did the right thing,” he concludes.