Article - April 29, 2014
Thanks to the recent awarding of GSP+ status for Pakistan, the country’s exports to the EU could potentially surpass the $1-billion mark. Finance and trade institutions are rolling up their sleeves, getting ready for action 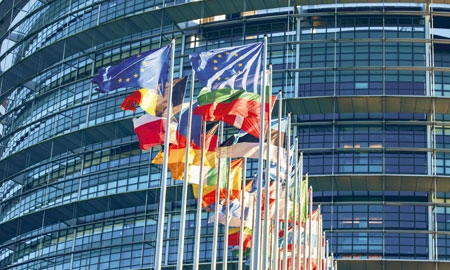 UNDER THE GPS+ RULES, NEARLY 20 PER CENT OF PAKISTANI EXPORTS WILL ENJOY DUTY-FREE STATUS IN THE EU
SHARE

The approval this year of Pakistan’s entry into the European Union’s Generalised System of Preferences (GSP) Plus club has opened the floodgates for the country’s products to reach a wider market. GPS+ status will allow almost 20 per cent of Pakistani exports to enter the EU market free of duties and a further 70 per cent to reach European markets at preferential rates. Pakistan’s GSP+ status has been granted until 2017 and is expected to result in the export of more than $1 billion worth of goods to EU markets annually.

The EU’s decision, ratified in January in an overwhelming vote of confidence in Strasbourg, is particularly welcome news for Pakistan’s textiles industry; other significant producers of textiles including China, India and Vietnam are not eligible to be granted GPS Plus.

“The award of GSP Plus status shows the confidence of international markets in the excellent quality of Pakistani products,” said Prime Minister Nawaz Sharif in a congratulatory message to the nation after the vote of confidence. “Gaining access to European markets was the top-most priority of the government as part of its economic development agenda.”

Mr Sharif added that the textile industry stands to earn around PKR 100 billion (£608 million) per year in light of the EU award. In turn, greater financing will be required to foster small businesses. That is where the expertise of Habib Metropolitan Bank in trade finance will be paramount.

A subsidiary of Habib Bank AG Zurich – rated by The Banker magazine as the fifth-soundest bank in Switzerland – HabibMetro operates across Pakistan through around 500 branches and recently completed an expansion programme to capitalise on the virgin market opportunities presented by small and medium-sized enterprises in previously untapped areas of the country. Now, with interest rates staging a recovery, HabibMetro plans to fully back Pakistan’s imminent textiles tie-up with the 27 EU markets.
“We are a trade finance bank and therefore have extended considerable short-term trade related credit to the textile industry,” says President and CEO of HabibMetro, Sirajuddin Aziz. “We make distinct credit decisions based on the textile segment in question. Credit discipline is one of the primary reasons behind HabibMetro’s sound asset quality.”

“GSP Plus status will give us a great advantage over the next two to three years. In the recent past, we have experienced setbacks in the home textiles and garments segments, particularly in the EU. We are positive that we will regain the ground there now. Factories, and textile units, are going through balancing, modernisation and replacement programmes. We are in a good position to take advantage of the GSP Plus.”

HabibMetro has been awarded the country’s highest rating by the Pakistan Credit Rating Agency for the past 13 consecutive years and has developed interests in Asia, the Middle East, Africa, the UK and North America. Now, having increased its volume of loans over the past two years, HabibMetro is well-positioned to achieve its national goals, in conjunction with Pakistan’s GSP Plus aspirations.

However, Mr Aziz warns that the burden of balancing debt with equity cannot be understated. “Pakistan’s economic policy has to be strengthened and implemented properly for private investment to be encouraged, and for bankers to find it feasible to extend funding for projects,” he notes.