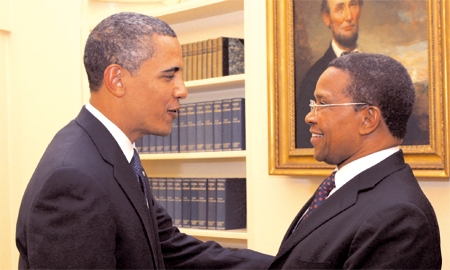 It has withstood the global financial crisis well, with EAC economies showing buoyancy and maintaining growth, albeit at reduced rates, and regional integration is progressing. Tanzania boasts East Africa's second-biggest economy, after Kenya, and provides an ideal foothold in the region. “When you invest in Tanzania, you will have access to a large market which includes the EAC as well as the SADC (Southern African Development Community),” says President Jakaya Kikwete.

Under his leadership, the country has become a bastion of economic reform and political stability. After entering office in 2005, the President implemented numerous reforms aimed at fighting corruption, improving social development and expanding democracy. Having secured re-election last October, President Kikwete and his Chama Cha Mapinduzi (CCM) party have another strong mandate to lead the nation.

The country prides itself on its peaceful heritage. “We have to engage ourselves in peacekeeping, because we are surrounded by hot spots,” says Minister of Foreign Affairs Bernard Membe. “There are civil wars and crises fought in Africa and we thought it was high time to train and involve our soldiers in peacekeeping missions.”

Over the past two decades Tanzania has transformed from a centrally planned to a market-oriented economy. The successful implementation of trade liberalization measures has increased foreign interest. The net inflow of foreign direct investment (FDI) rocketed from $5.84 million in 1989 to $414,545 million in 2009. Gross domestic product (GDP) also rose, from $8.638 billion in 1999 to $21.623 billion in 2009.

The International Monetary Fund (IMF) economic outlook report for sub-Saharan Africa states Tanzania’s economic prospects are promising. Last October, the IMF congratulated both the Bank of Tanzania (BoT) and the government for their practical monetary and fiscal policies. “The financial sector is very sound and all key indicators of the banks are adequately capitalized; they have more than enough liquidity,” says Prof. Benno Ndulu, governor of BoT.

Real GDP growth has averaged 6.5% per year over the past decade, and the forecast is for strong growth. The Economist Intelligence Unit expects GDP to increase to 7.1% this year and 7.5% in 2012 as investment, trade and tourism pick up.

Covering an area of 365,754 square miles, Tanzania is the largest country in the region. Agriculture is the mainstay of the economy. The U.S. government recently announced it would contribute $2 million to establish the Southern Agricultural Growth Corridor of Tanzania (SAGCOT) project as part of a new global framework, entitled A New Vision for Agriculture. “If you can succeed in turning Africa’s agriculture around, you will have made a real difference to the fight against poverty,” says President Kikwete. “We have products we want to market, and we are interested in foreign investment, as well as technology and skills.”

Recently, the government and the UN endorsed a four-year, $773-million development plan that will run from 2011 to 2015 and focus on a raft of social and economic improvements.

Road building and energy projects are set to give a boost to the construction industry, and the economy will also benefit from increased gold exports. Also, according to the Minister for Industries and Trade, Dr. Cyril Chami, Indian companies have shown interest in investing some $250 million in Tanzania’s manufacturing sector. “If Tanzania was as strong economically as it is politically, we would be attending G20 meetings,” says Dr. Chami. “In a few years Tanzania will be a giant in the continent.”