Article - December 3, 2013
Although U.S.-Mexico relations date back throughout the history of the two countries, Mexico’s recent sustained economic growth, which is certainly higher than that of the U.S. of late, has given rise to a growing middle class and North American businesses and investors know that their southern neighbor is a force to be reckoned with. The U.S. government is also amending its dialogue with Mexico, evident in the speech President Obama gave at Mexico City’s Anthropology Museum in May this year 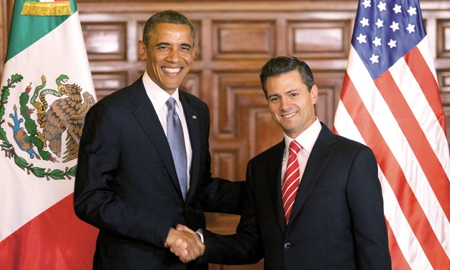 “Despite the deep bonds and values we share, attitudes – in both countries – are sometimes trapped in old stereotypes. Some Americans only see the Mexico depicted in sensational headlines of violence and border crossings. Some Mexicans may think America disrespects Mexico, that we seek to impose ourselves on Mexican sovereignty, or, alternatively, wish to wall ourselves off. And in both countries, such distortions can breed myths and misunderstanding that only make it harder to make progress together,” he said.
“I have come to Mexico because it is time to put old mindsets aside. It’s time to recognize new realities, including the impressive progress in today’s Mexico. For even as Mexicans continue to make courageous sacrifices for the security of your country; even as Mexicans in the countryside and in neighborhoods not far from here struggle to give their children a better life…it’s also clear that a new Mexico is emerging.”
This new Mexico is a product of many years of hard work, patience and lessons learned the hard way. This is being accelerated by a political pact (Pact for Mexico) signed by the major parties when President Enrique Peña Nieto took office late last year, as well as by the series of reforms that his administration is pushing to pass.
Sharing a 2,000-mile land border made bilateral trade and investment a logical and almost inevitable occurrence from the get go. Today, two-way trade totals over US$493 billion – thanks in large part to the North American Free Trade Agreement (NAFTA) – and Mexico ranks as its northern neighbor’s second-largest export market and third-biggest trading partner. Last year, more than three-quarters of Mexico’s exports went over the border and in terms of crude oil, it was the third-largest foreign supplier.
Though southbound U.S. investment still greatly surpasses the northbound flow, Mexico’s growing economy, entrepreneurial savvy and disposable wealth is driving Mexican investment in the U.S. up; last year it rose by more than 11% to reach US$27.9 billion.
Investing companies include those in the business of telecoms, food, electronics, aluminum, chemical products and even movie theaters. Such is Mexico’s investing power these days that in 2012 it became the top Latin American country in foreign investments abroad, outpacing Chile and Brazil.
In a keynote speech in June, Mexico’s Ambassador to the U.S. Eduardo Medina Mora emphasized that shared interests between the U.S. and Mexico were at unprecedented levels, noting bilateral trade had grown by more than 500% over the past 20 years.
Border security remains a pressing issue the two countries must deal with, yet Mexico’s economic upswing is casting a new light on the matter.
As President Obama said in May, “Obviously, we seek to work with the Mexican government on all issues related to a well-regulated border. But I also believe that the long-term solution to the challenge of illegal immigration – so we’re not dealing with this, decade after decade – is a growing, prosperous Mexico that creates more jobs and opportunity right here.”
With the education system improving (interesting to note is that more engineers graduate from Mexican universities than from U.S. and German ones) and the country moving from pure manufacturing to “mindfacturing”, Mexicans are better prepared than ever to take on the world. And with the Peña Nieto administration laying the groundwork for greater economic and social development, it could very well be that within just a few years’ time, hundreds of thousands more Mexicans will prefer to stay close to their families and will have the means to travel to the U.S. for pleasure – or business – rather than to seek a better life.