Port Sudan a centre of industry, logistics and export

Article - December 18, 2013
The city of Port Sudan – lying on the spectacular Red Sea coast – is not only a prime tourism destination, but a logistics hub that holds a visionary investment park and a key oil refinery as well as acting as a strategic maritime gateway to the rest of the world 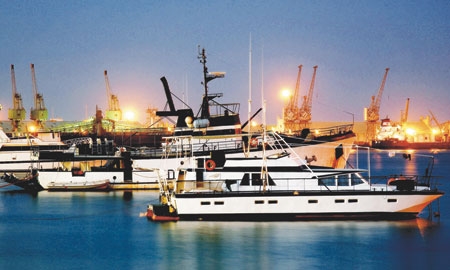 Established by the British in 1909 to export cotton, sesame seeds and sorghum, Port Sudan lies on the Red Sea and is home to Sudan’s main seaport with modern dock facilities. From here, around $4 billion worth of goods is exported every year, while annual imports to the tune of $7.5 billion are offloaded, making the harbour an integral part of the country’s economy.
The oil refinery on-site handles oil transported mainly from South Sudan. Sudan’s landlocked neighbour relies completely on the port for overseas exports of oil.
This means billions of dollars in much-needed oil transport fees for Sudan, which lost 75 per cent of its oil resources following South Sudan’s secession in 2011.
In April the Govern-ment of Sudan signed a Memorandum of Under-standing with an Italian company to rehabilitate and upgrade the refinery in order to handle the increasing demand for oil products.
As well as being a transport hub for oil and other goods, Port Sudan is also renowned for its beautiful beaches and excellent scuba diving.
Meanwhile, the port as a whole is undergoing major modernisation and upgrading overseen by Sea Ports Corporation (SPC), with the Government repeatedly announcing intentions to make Port Sudan one of Africa’s top ports. Rehabilitation of the harbour began in 2006 with the help of Chinese investments, while one of the most recent major developments was in 2011 after the construction of a new terminal with a capacity for 800,000 containers was completed, again aided by the Chinese.
However, it now seems that the UK itself wants to play a more significant part in development of the port that it originally built more than a century ago. Following a visit to Port Sudan in December 2012, British Ambassador Peter Tibber said that he looked forward “to a greater UK-Sudanese partnership in developing the Port”.
During a trip to Port Sudan last year, Mr Tibber also took the time to visit Red Sea Free Zone. He called it a “visionary investment park – a huge expanse of land linked up to power and telecoms and aiming to attract 500 new investors”.
What’s more, in another major development for the area, plans are currently underway for the construction of a Dakar-Port Sudan railway line.  If the plans are eventually realised it will be one of the biggest projects ever undertaken in Africa  and will represent a quantum leap in the area of land transportation and trade exchange on the continent, giving four landlocked countries access to the sea and providing them with a 10,100km-long rail artery.
While overall modernisation of the port will no doubt be hugely positive for Sudan and its economy in the long run, with 30,000 people currently being employed by the port, the greater introduction of modern equipment and machinery will eventually lower the dependence on manual labour.
Determined not to neglect its social role, the Sea Ports Corporation says it wants to find a balance between the modernisation process and labour and is currently working to find alternatives for the harbour workers through training and assimilating them in other posts through creating alternative projects.