Article - July 28, 2011
The government is incentivizing the private sector to help Colombia extend its digital infrastructure and bring in new technologies and software 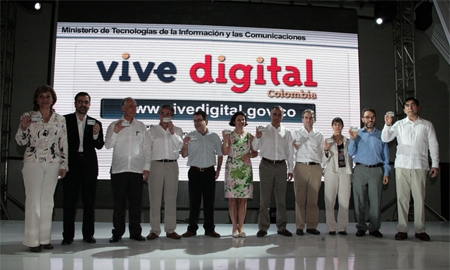 Colombia is offering international companies $200 million to help develop its Internet infrastructure as it launches a nationwide ITC development program called Vive Digital, or Digital Living. This opens up a range of opportunities for U.S. companies wanting to move in, especially those with an eye on the larger regional market as neighboring countries, especially Brazil, are likely to follow Colombia’s example.

“The implementation of Vive Digital will create several business opportunities. As far as infrastructure is concerned, we need to build a large fiber-optic information highway to connect more than 700 communities. Consequently, we will send out a tender, and we are hoping for the involvement of both national and international investors. The project has an estimated cost of $600 million and the government will make an initial investment of $200 million,” explains Minister of Telecommunications Diego Molano Vega.

“Similarly, we will widen the infrastructure scope to offer third and fourth generation services and we will expand connectivity coverage to rural areas with diverse technologies.”

The government has said it will also offer at least two new 4G licenses later this year. Although cell phone penetration in the country is 100% (there are more cell phones than people in Colombia), new technologies will allow for the introduction of smart phones and new cellular applications. The government is also intent on developing its budding software development sector, and in particular, is targeting the creation of new applications that will make connectivity more appealing to the nation’s small and medium-sized companies.

“In order to boost Internet use, we must offer applications that suit the needs of Colombians and their businesses in addition to offering quality services and appropriation strategies that lead to increasing use of technology among Colombians,” adds the Minister.

New companies moving into Colombia will join the ranks of the many international names already operating there, such as Spain’s Telefonica, Paraguay’s Tigo, and Mexico’s America Movil and Telmex – as well as national leaders UNE and Comcel – in an increasingly sophisticated market.

Still, Colombia is interested in the arrival of U.S. technology and the government has already been in talks with several American companies, including Verizon and AT&T.