With the rising cost of healthcare in the West creating an incentive to source cheaper quality drugs, Bangladesh is poised to become a major player in the global market as local manufacturers clear international regulatory hurdles to expand their export capacity 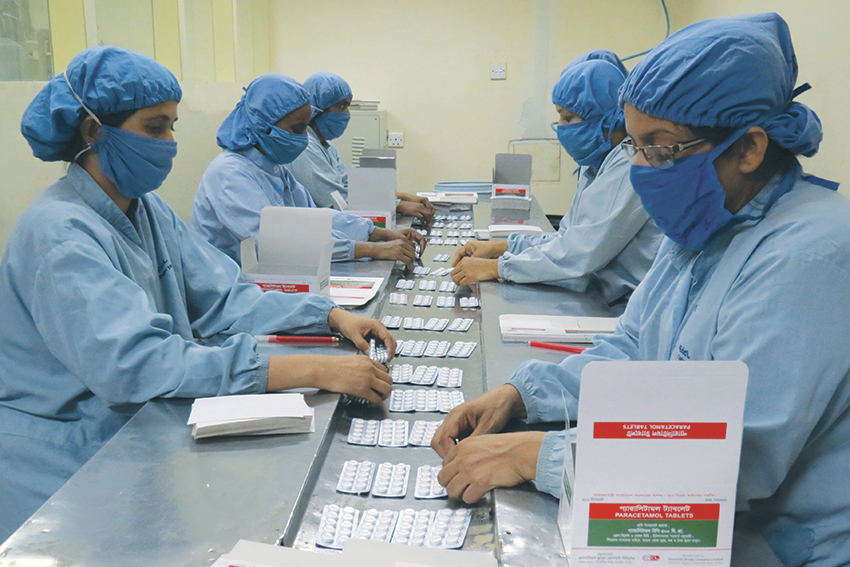 The jewel in Bangladesh’s economy is its pharmaceutical industry, a sector helping to drive the country’s steady growth by generating more than $1 billion in sales and producing enough medicine to meet nearly all of its needs.

The sector has enjoyed double-digit growth annually since 2009, and is poised to become a major player in the global market as local manufacturers clear international regulatory hurdles to expand their export capacity.

About 260 companies produce thousands of drugs and supplements for the domestic market, valued at approximately $1.3 billion. Products range from common over the counter drugs, like aspirin, to high-tech inhalers, infusers, and injectables.

“We produce 99% of our domestic requirements and now we are exporting,” says Salman F. Rahman, Vice Chairman of the Beximco Group, one of the country’s leading producers of pharmaceuticals.

Exports have expanded since the 1980s when just a few manufacturers were exporting to a handful of countries in the developing world. Now Bangladesh’s pharmaceutical companies export to more than 52 countries worldwide, including Europe and Australia.

Exports still represent only about 5% of production or about $48 million, but that is expected to change. Bangladesh is arguably the most inexpensive source of quality medicine. A generic drug manufactured in Bangladesh, for instance, costs one-tenth the price of the same drug produced in the West and is 20% cheaper than one produced in neighboring India.

Square Pharmaceuticals, one of the leading drug makers in Bangladesh, won approval from the Food and Drug Administration this year for its Dhaka unit to begin exports of solid dosage form drugs to the United States

The rising cost of healthcare has created an incentive to source cheaper quality drugs. Bangladesh is only too eager to answer that need. Most of the export growth has been concentrated in low and middle-income countries, such as Myanmar, Afghanistan, and Nepal but in recent years several manufacturers have proved their competitiveness by gaining accreditations from regulatory agencies in the UK and Australia and now some manufacturers have set their sights on the U.S. drug market, the largest in the world.

Square Pharmaceuticals, the leading drug maker in Bangladesh with nearly 20% of the market, won approval from the Food and Drug Administration this year for its Dhaka unit to begin exports of solid dosage form drugs to the United States.

Founded in 1958 by Samson H. Chowdhury along with three of his friends, Square converted to a limited public company in 1991, and issued its first offering of public shares in 1994. The pharmaceutical segment remains the flagship division of Square Group, which also includes toiletries and health services.

Mr. Chowdhury remained active in the company until his death at the age of 85 in 2012. His influence continues with the ascension of his sons to company leadership positions, and they have taken pains to continue their father’s legacy of business ethics and patriotism.

“We value discipline, honesty, ethical standards, it is also important to be nationalistic. This is the country that has brought us up, that has given us so much, so we should be loyal to the country,” says Anjan Chowdhury, Managing Director of Square Toiletries. “Anything we do has to be quality; it has to be something good for the country, good for the people. My father always thought that a happy family is very important.”

In order for Bangladesh to remain competitive in exports, it must begin manufacturing its own supply of active pharmaceutical ingredients (APIs). Bangladesh’s government is collaborating with industry to address this challenge

At Square, “family” includes the 35,000 employees that the company employs. “You will never hear me say “good employees,” says Mr. A. Chowdhury, who prefers to refer to his employees as colleagues. “We are one nation, one people of Bangladesh,” he affirms.

His nationalism is more than just rhetoric; he was a freedom fighter during the country’s war for independence from Pakistan in 1971. “[We have] loyalty to the nation and want to empower others. We have a huge number of unemployed in this country and to bring them up in society we have to create employment,” he says. “We are here to stay; our commitment is to this nation, nowhere else. We were invited many times to open factories abroad; my father always said, “not now” because we have a responsibility to our people, we have the opportunity to do good here.”

Doing good for Square means creating jobs and paying its share of taxes. In the United States griping about taxes is a common theme, but the leadership at Square embraces its tax contribution, one of the highest in the country. Anjan’s brother Tapan Chowdhury is the Managing Director of Square Pharmaceuticals and once served as the government’s only business advisor during Bangladesh’s transition to independence.

“You need to remember that unless companies pay taxes, nothing is going to work,” says Mr. T. Chowdhury. “We have been depending on foreign aid and foreign assistance for years. I think it’s high time that we start relying on ourselves. Square Group should be a role model for small businesses and the younger generation.”

In his unique role as a member of the government’s transition team, Mr. T. Chowdhury learned first hand the consequences of tax evasion. He was responsible for overseeing the energy industry, which was experiencing a supply crisis in electricity and natural gas. A closer look at the problem revealed that many industries were simply not paying their bills. “I was shocked, as it was a huge amount of money. So we went after them, of course I did not make friends, but in a month more than 100 million (BDT) was collected,” says Mr. T. Chowdhury. “If you don’t pay taxes how do you expect the government to run?”.

The Chowdhurys express the same passion for business innovation that they have for their country. “If you stop innovating, your competition runs over you” is a quote that appears under their father’s picture, and reminds the duo of one of the hallmarks that helped make their company such a success.

Square was the first to initiate exports to the African and Australian markets, and in the process attracted the brightest scientific minds in the country. Now with their sights focused on the more than $400 billion-a-year North American market, innovation continues to be a cornerstone of their strategy.

“We have a great domestic market here, but certainly the door will be open to North America,” says Mr. T. Chowdhury. “It is crucial we position ourselves strategically with the selection of the products. We’re really excited about it.”

As an LDC, (Least Developed Country) Bangladesh enjoys greater flexibility under TRIPS (Trade Related Aspects of Intellectual Property Rights), an international agreement governing intellectual property rights. TRIPS provides a 20-year patent protection for drugs, but LDCs enjoy a waiver until 2016. That is, Bangladesh drug makers can manufacture patented drugs domestically and to a limited extent export without paying royalties until 2016. Therefore a Bangladeshi company could offer a much lower priced export drug than India or China or any other country where patent rights are implemented.

Depending on the country, that waiver could be extended for another 10 years. However, Bangladesh has not yet been able to beat the prices of drugs offered by India or China, because it still imports 95% of the raw materials needed for finished medicine. These raw materials referred to as APIs (active pharmaceutical ingredients) are usually imported at a premium. In order for Bangladesh to remain competitive in exports, it must begin manufacturing its own supply of APIs. Bangladesh’s government is collaborating with industry to address this challenge. A 200-acre API park, at Bausia, about 40 kilometers from Dhaka, is being developed to support production.

Joining forces to build the API Park isn’t the only initiative the government has taken to secure medicine for its people. Bangladesh has been very pro-active even creating its own manufacturer to secure a steady supply of medicine for its state-operated clinics and hospitals.

Essential Drugs Company Limited (EDCL) plays a unique role in the market place. Fully state owned, it first began functioning as a procurement agency under the authority of the Ministry of Health and Family Welfare.

“Initially we bought medicines from private companies and distributed them to our citizens free of cost,” says Professor Ehsanul Kabir, Managing Director and CEO of EDCL. “This was very costly for the government and private companies could not ensure a regular supply. So the idea was why not build a pharmaceutical company?”.

The plan then became one in which the government would purchase the drugs from its own pharmaceutical company to minimize costs.

Despite its emphasis on public policy versus profits, profit margins were significant enough to allow the company to expand and build its own factory in which it produces a range of essential drugs. EDCL not only produces medicines, it also distributes them throughout the country including its most remote areas.

The drug maker continues to focus on public health initiatives; therefore it centers on products aimed at addressing public health concerns. Among the most challenging issues facing the country is birth control. Bangladesh has a population of 160 million people and remains one of the most densely populated countries in the world. EDCL plays a vital role in providing free contraception to its citizens. One of its factories is dedicated to producing condoms, and another factory capitalizes on the country’s abundance of rubber trees, to produce the latex needed for condoms. Plans are also underway to build a facility that will produce hormone pills and intravenous infusions for contraception.

While serving its citizens is the primary objective, profits don’t hurt the mission, says Mr. Kabir, who points out that every decision takes into account the interest of the people. “Profit is important in order to expand our company without the need to get a loan or more money from the government. We want to ensure that every citizen no matter where they live has access to quality medicine free of charge. That is our business.”