Paul Biya re-elected for sixth term as President of Cameroon

Article - November 14, 2011
Paul Biya, Cameroon’s president for the past 29 years, has been re-elected for another seven-year term. The results of the presidential election in Cameroon were published on 21 October. 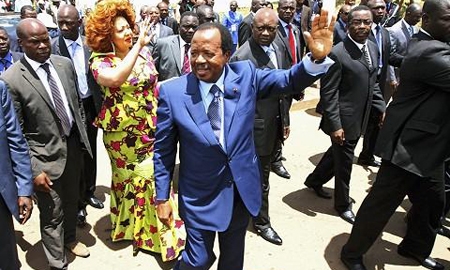 CAMEROON'S PRESIDENT PAUL BIYA WAVES OUTSIDE A POLLING CENTER AFTER CASTING HIS VOTE IN THE CAPITAL YAOUNDE, OCTOBER 9, 2011. (REUTERS)
SHARE

Biya, the 78-year-old incumbent, was re-elected with 77.98% of the votes. John Fru Ndi came second with 10.72% of the votes. Edith Kah walla, who was presented as the youth’s favourite, came in sixth position, with 0.71% of the votes.

The results were met with joy and celebration in the Biya camp. “We chose continuity and peace with Paul Biya”, explains Jérôme Essy.

“Very few candidates had a manifesto. With Paul Biya, we are entering an era of great achievements. He promised that, from 2012, Cameroon will be a large construction site with the realization of great projects such as the Kribi deep-water port or the Lom Pangar hydroelectric plant. These projects will create jobs and contribute to the country’s development”, says Marlyse Makoudoum.

Since the proclamation of the results the country has been peaceful, with no signs of protest on the horizon. The Cameroonian people have accepted the outcome, and – with the election out of the way – the government can now implement its plans for massive infrastructural development throughout the country.