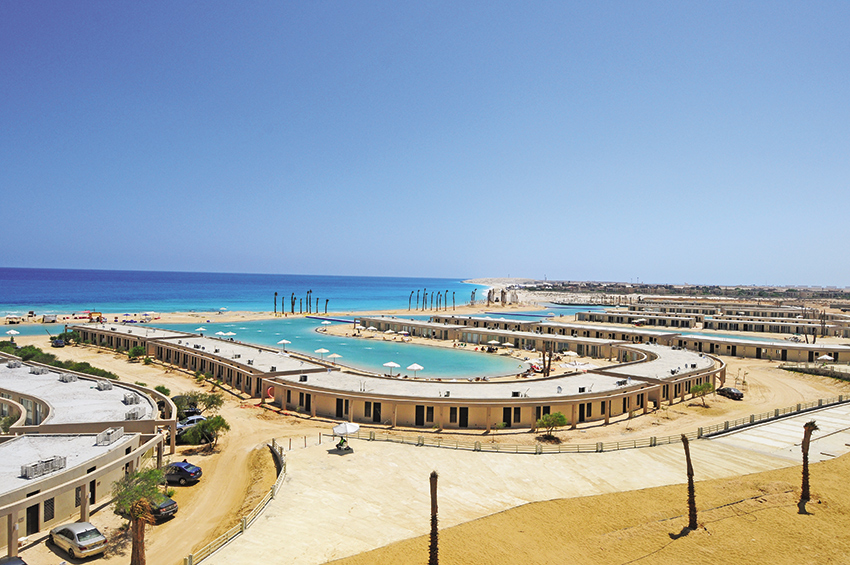 PALM HILLS DEVELOPMENTS NOW RETAINS ONE OF THE LARGEST LAND BANKS IN THE COUNTRY.
SHARE

The company’s vision of creating integrated and self-sufficient communities has yielded remarkable results.

Palm Hills not only possesses an impressive collection of eighteen nationwide residential, commercial and tourist projects but has also achieved spectacular sales and profits growth.

Building upon this success, Palm Hills recently signed two Memorandums of Understanding (MOUs) at the Egypt Economic Development Conference (EEDC) in March, for two major projects in partnership with the Egyptian Ministry of Housing (MNHD).

The first project is for a 500 feddan gated community development in New Cairo.

This is an area in which Palm Hills has a lot of past experience and expertise, as Tarek Abdel-Rahman, the co-chief executive officer of Palm Hills Developments explains: “It will be similar to our usual compounds servicing the upper-middle class and above. This is our bread and butter, and we do know how to do it.”

The second project is an altogether more ambitious and historic undertaking. A 10,000 feddan development in West Cairo, it brings together Palm Hills Developments and UAE’s Aabar Investments.

It will constitute the largest ever private joint venture in Egyptian-Emirati history.

“The 10,000 feddan project is completely different because it is the development of a town. It will have to include low-medium and high density housing with a strong theme underlying the whole town.”

Mr. Abdel-Rahman explains. “We are thinking that our 10,000 feddan project will be based on wellness and education, but we are not quite set on a theme yet. However, it will have a very strong theme that will drive the economy and the town so that people can live and work there, and we have currently initiated the conceptual master-planning phase,” he adds.

Situated in the 6th of October area of Cairo, the project will complement rather than compete with the government’s The Capital Cairo project.

“They are both on different sides of the city, so they won’t necessarily compete,” says Mr Abdel-Rahman. “Our understanding is that the government wants the whole 6th of October area to be the residential, entertainment, and tourism hub.”

“Our 10,000 feddan project will be based on wellness and education. It will have a very strong theme that will drive the economy and the town.”

Both projects were signed at the global three day Egyptian Economic Development Conference in March. Aimed at re-affirming international investor confidence in Egypt, it was according to Mr. Abdel-Rahman, an important success.

“The conference was extremely important because it signaled that Egypt is open for business. The quality of the speakers was unbelievable. In which conference do you see the CEOs of GE and Siemens along with senior people from Pepsi and Coca-Cola, Christine Lagarde, Tony Blair, Albert Speer and delegations from the Gulf countries together? This signals again that foreign investors are interested in Egypt and that Egypt is courting foreign investors.”

The need for housing projects in Egypt is apparent. The present cumulative housing gap in the country stands at 8 million units and is growing by 3,000-4,000 units per year.

Whether or not the gap can be closed is uncertain, but it certainly demonstrates the continued real demand for real estate development in Egypt, supported by the country’s compelling demographics.

“I’m not so sure that we will catch up,” says Mr. Abdel-Rahman.  “Where do you get the infrastructure to build 8 million units? How long will it take you to build 8 million units, and what is the gap going to be then? Last year, we delivered 980 units. The other competitive developers probably delivered roughly 4,000 units. Let’s assume that all the other developers developed 10,000 units. It’s still insignificant compared to the demand driven by real need for personal usage.”

International investment is a key priority for the company. Listed in both the Cairo-Alexandria Stock Exchange and the London Stock Exchange, Palm Hills has already proven its ability to attract foreign capital.

In November last year for example, UAE based Aabar Investments PJS bought a 5.1% stake in the company.

Palm Hills hopes to attract more international investors this year, as it undertakes a capital increase with a new share issue worth EGP 1.65 billion.

Mr. Abdel-Rahman explains: “It’s being offered to existing shareholders at two Egyptian pounds per share, but in Egypt, the right to subscribe trades is separate from the share itself. If you are a shareholder that doesn’t want to subscribe, you can actually sell that right to someone else who can buy it and subscribe in your place.”

In support of the share issue, the company has recently completed a successful road show tour targeting international institutional investors.

“It was a very positive road show and we met some of the top-tier investors in the world who were willing to listen to our story and were very excited about Egypt.”