Article - December 17, 2012
Beloxxi’s cream crackers are made to world-class standards, and the company has set a standard for Nigerian businesses looking to expand and develop 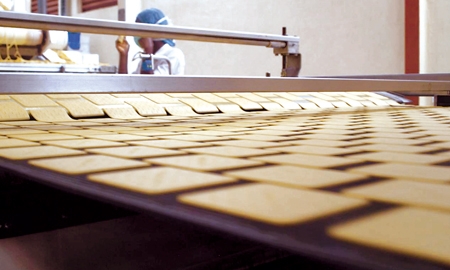 It is curious how something as small as a cracker can rescue a country’s manufacturing industry, fight unemployment and contribute to socioeconomic development. Yet such is the case of Beloxxi, producer of one of Nigeria’s favourite healthy snack foods.

Obi Ezeude is the mastermind behind Beloxxi. He created Beloxxi & Co Ltd in 1994 to import HWA TAI Cream Crackers from Malaysia, and in a short time his company had become the single largest importer of cream crackers. Consequently, it became clear to Mr Ezeude that importing increasing quantities of crackers to keep up with demand made less sense than manufacturing a similar product at home in Nigeria. Plus, a local business would be a boon to the local economy, which was in a poor state.

“I was already thinking of how to start producing crackers because I knew I couldn’t do all that I wanted to do by simply importing, since unemployment rates in Nigeria were getting out of hand,” he recalls.

When the Nigerian government banned cracker imports in 2003, Beloxxi’s CEO saw this is as a clear sign that the time had come for him to launch his own factory. Despite the Malaysian company’s insistence on exporting their product into Nigeria illegally through Beloxxi, Mr Ezeude was firm in his decision and sought funding. Armed with a $2.2 million loan from the US EXIM Bank, his company, now called Beloxxi Industries Ltd, commissioned its maiden cracker factory in Ikeja, Lagos State, which became operational in 2006.

Nigerians had become accustomed to high-quality imported cream crackers, and they were in no way disappointed by Beloxxi’s new product.

“We had vowed that we were not going to give the Nigerian consumer anything inferior to the foreign biscuits we marketed,” says Mr Ezeude.

Beloxxi Cream Crackers’ bright blue packages sport the Nigerian flag, along with the phrase: “Proudly Nigerian” – over 80 per cent of the raw materials used by the company are sourced locally.

Once Beloxxi’s crackers hit the market in January 2007, they were an instant success. By February, supply fell behind demand, and by the end of the year Mr Ezeude knew that a larger factory would be necessary. Thanks to funding from the Central Bank of Nigeria, Skye Bank and the Nigeria Export-Import Bank, he was able to procure a 15-acre greenfield site on the Agbara Industrial Estate in Ogun State, and purchase €8 million worth of state-of-the-art equipment from Italy’s Imaforni Int’l SpA, the world leader in cracker and biscuit manufacturing technology. Today, Beloxxi is the largest cracker manufacturer in sub-Saharan Africa.

“Here [in Agbara] we’ve been able to get two lines up and running and now have the third being prepared for set-up, with a fourth on its way,” says Mr Ezeude. “As of today, we have a total valuation on the new factory of over N9 billion ($56.6 million) and at full capacity we can make over 1.6 million tons of crackers a year.”

His vision for the company is to become Nigeria’s premiere cracker exporter. As of today, Beloxxi exports only to Ghana and has to work at full capacity to merely keep up with domestic demand.

“Nowadays, our product is designed for both the local and international markets. Our ingredients come from the best suppliers I can find. For example, my glucose comes from the USA, my butter from South Africa and the oil I use comes from Nigeria,” explains Mr Ezeude.

Not only is Beloxxi’s business a healthy and highly successful one, it is also making contributions to Nigeria’s young population, who make ideal temporary factory workers. The company, in fact, only hires people who have passed their Senior School Certificate Exam and who intend to continue studying. For Mr Ezeude, factory work is not a profession, but rather a stepping-stone to make and save some money to go back to school.

“We only employ young workers who want to study,” says Mr Ezeude. “If you get into a school, college or university and you work for us then you still get your salary uninterrupted while you study.”

Beloxxi stands as an excellent example of Nigeria’s pioneering spirit, and Mr Ezeude believes that with assistance from foreign partners, his nation’s industrialisation can really take off and perhaps one day mirror the explosion that has already happened in Brazil and China.