Article - July 20, 2011
The world’s fifth richest country in mineral resources, the Philippine mining sector is back on course after a nearly 30-year slump and the government is taking sustainable development and inves 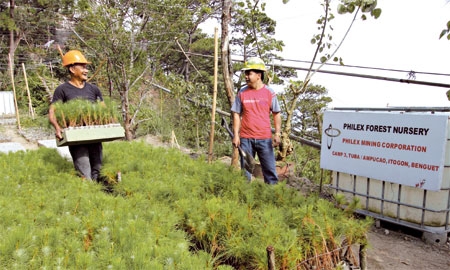 There is an estimated 1$ trillion dollars’ worth of natural resources in the Philippines. In fact, the country’s land is considered the world’s fifth richest, with the planet’s largest nickel, third largest gold, and fifth largest copper reserves. The 1970s and 80s witnessed a boom in the mining sector, but tightened regulations – especially in terms of working with Local Government Units (LGUs) – put an end to the sector’s contribution of 20% to national GDP.

President Aquino’s administration has targeted mining as one of the eight key sectors of growth and is putting real reforms into place to get the sector off the ground and running once again.

A new mining law has been established, winning back investor confidence and allowing 100% foreign owned companies to operate in the Philippines. Passed in 1995, the law went through an adjudication period. Ramon Paje, Secretary of the Department of Environment and Natural Resources (DENR), says, “Now we have one of the strongest laws in the region because the law was adjudicated for 10 years, not only by the Congress but also by the Judiciary. That is why we can guarantee that investments in mining will be protected.”

“This is the only sector in the country where foreigners are allowed to own 100% of the operations,” he adds.

With the wealth of mineral resources coupled with today’s favorable market prices, a growing number of investors are seeking out available mining claims in the archipelago. The DENR’s corporate arm is the Philippine Mining Development Corporation (PMDC), and besides exploring, mining, smelting, producing and exporting, among other tasks, the PMDC also promotes mines for development.

“Our goal is to go for a PPP to develop the mines and speed up the administration of the claims,” explains Lito Mondragon, president and CEO of PMDC. “At the moment we have about 23 ongoing works on the mines and we still have upwards of 20 that need to be developed.”

Chinese companies have been the most responsive so far. Philip Romualdez, president of the Chamber of Mines of the Philippines, says, “I think U.S. interest in the Philippines has changed. The mining companies in the U.S. are generally more interested in going to Canada and Europe and even Latin America. It’s therefore a challenge to bring American mining companies over here.”

Because Philippine mines are in such demand, a government policy of ‘use it or lose it’ is preventing claims from sitting idle. After a stipulated amount of time and three notices, claims are forfeited and passed to the PMDC.

According to Mr. Mondragon, part of the PMDC contracts require mining companies to submit their development and environmental plans from the start, as well as quarterly reports.

The LGUs still have a voice in deciding whether a mining project is beneficial for the local communities, yet the government has the final say. The process, albeit tedious, ultimately guarantees a green light for the project, and investment security and sustainability.