Article - July 3, 2012
Since Algeria gained independence from France in 1962, relations with Germany have been based on friendship and trust. Germany has been financially involved in the development of Algeria through a technical cooperation agreement – a contribution that has amounted to approximately €200 million since 1974 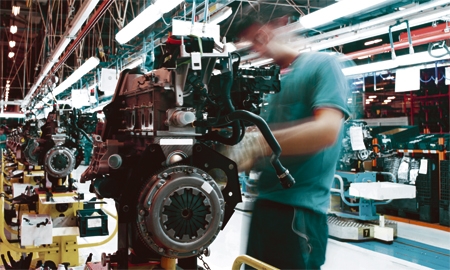 On a cultural level, relations between both countries have also been successful: the Goethe Institute was founded in Algiers in 1963, resulting in German being the third language spoken by Algerian students, after French and English. In addition, the German Institute of Archaeology was chosen by Algeria in 2008 to restore the Archaeological Museum of Cherchell in Algeria's Tipaza Province, which houses what are widely considered to be the some of the finest examples of Roman and Greek antiquities on the African continent.

Today there is a strong political will on both sides to extend bilateral relations. In April 2001, President Abdelaziz Bouteflika became the first Algerian president to visit Germany, and later revisited Berlin in 2010. In return, Chancellor Angela Merkel paid an official visit to Algeria in July 2008.

Several agreements have been signed over the past five years in an effort to promote trade between the two countries. In 2005, a bilateral agreement with the European Union was signed to create a free-zone exchange. It was extended in 2010 as a way of increasing European investments and developing small and medium-sized enterprises (SMEs) in Algeria beyond the hydrocarbon industry, in sectors such as agriculture, water and transport. Germany and Algeria also signed a fiscal convention in 2007 to avoid companies being taxed twice.

The Algerian-German Chamber of Commerce and Industry (AHK), created in 2006, already has 760 members. One of its missions is to officially represent the German economy, regrouping companies having an interest in bilateral relationships and facilitate their access to joint commercial and trade activities. For example, in June the AHK arranged for a Bavarian business delegation to meet various Algerian companies in the medical and electronics fields. The AHK also represents its Algerian members abroad, providing support in Cologne, Dusseldorf and Munich.

The numbers speak for themselves…

Algeria’s exports to Germany reached €6.93 billion in 2010 - from which 95.7 per cent came from the petrol industry. The same year, Germany’s exports to Algeria increased by 32 per cent to reach €1.4 billion. German exports came primarily from the automotive sector, but industrial machinery, chemical products and electrical equipment were also shipped.

In the automotive sector, Germany and Algeria have worked together for a long time. SNVI has partnered with ZF for 30 years to build gearboxes. Over the same period, EQUIPAG has been partnering with Lieber Deutz to build tractors and civil engineering vehicles. New partnerships continue to emerge, with Mercedes, Deutz and MTU working together to produce new generation of diesel engines.

“For the companies in the mechanics sector, we have put in place development plans to enable them to renew their product ranges,” says Mohamed Benmeradi, Minister of the Industry, SME and Investment Promotion. “We have signed contracts with Mercedes to renew our trucks range; we are going to produce 15,000 trucks under Mercedes, which is a huge project. They will be available in 2013 and they will be produced to international standards, which for us is very important. We are also going to rebuild buses with under the Mercedes range and 45,000 huge engines with a German company.”

The recent push from the Algerian government to develop the country through investment in sectors such as transport – roads, railways and ports – and housing are definitely of interest to the German market, particularly as German companies are very skilled in mechanics know-how. As an example, in 2010 German direct investment in Algeria reached €350 million through the development of joint ventures in the production of natural gas and the electrification of the railway network.

For years, Algeria worked with international subcontracting partners on a ‘license-to-produce’ level, as was the case with Lieber Deutz for instance. Today there is a strong will to take partnerships to a new dimension. The idea is to get ‘interactive’ partners involved to jointly create a company, sell the products, and share the dividends. This structure results in delivering finished products, which can be labelled internationally and therefore can be exported, and not solely sold in Algeria. This is the new dynamic that the country wants to push in terms of subcontracting partnerships.

This was the case with the German company CLAAS, producing combine harvesters and who needed to upgrade their product range. A participative partnership was created with EQUIPAG, whereby the two companies jointly produced products, sold them and shared the profits. “So the best way [for us] to deliver products within the international norms, is that when your products are manufactured, you can sell them wherever you want. Of course your products need to be of quality, but you have an international product. That is our objective at the moment because this is one of the best conditions for us to ensure the transfer of know-how,” says Bachir Dehimi, CEO of EQUIPAG. “Germany has always been top of the list for providing good technology, reputable products, and a high-standard of know-how and training.”

Germany is sharing more and more of its expertise and educational skills with Algeria. KNAUF has not only built a very successful plaster factory in Oran, but has also developed a training centre focused mainly on Algerians.

Anne Ruth Herkes, German State Secretary at the Federal Ministry of Economics and Technology, recently signed a long-term project to introduce the dual training format in Algeria, which permits employees to work and be trained in the same time. The Algerian-German Chamber of Commerce and Industry in Algiers has an important role to play and works with its colleagues in Oran to implement this integrated training.

It is also crucial for Algeria to start diversifying its economy beyond hydrocarbons, which represent 98 per cent of the country’s exports. Germany’s Desertec project aims to exploit the solar potential of Algerian desert lands in order to produce sustainable electricity on a huge scale – a project that will need both countries to ally their forces to make it a reality.

Christoph Partsch, AHK’s General Manager, says: “This is the third year that the AHK has organised EnviroAlgeria, which is both a fair and a conference at the same time. This year’s event is based around the green economy and will take place in Oran on October 15th to 17th.”

Another upcoming conference is focused on entrepreneurship, encouraging greater involvement in Algeria from new graduates from German universities and the launching of Algerian-German start-ups will take place November 12th-18th.

Cizar Bachir
100% of 1
Great report, thank you very much the Algeria Project Team, i have really do appreciatethat, you have done a great job