Article - October 24, 2011
Many African women – both in Africa and in the rest of the world – choose to dress in traditional garb, characterised by lively and colourful cotton prints 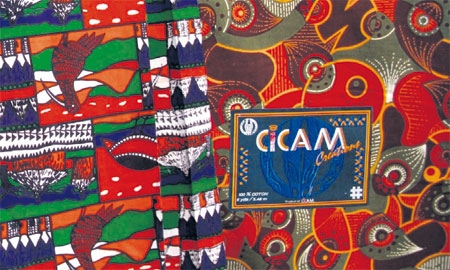 In Cameroon, one of the most successful companies in manufacturing these textiles is Cotonniere Industrielle du Cameroun, or CICAM.

“We increased outlets and did something new by putting pick-ups on the roads and they would go to weekly markets all over the country and sell the goods from the pick-up,” explains Michel Polidori, general manager of CICAM since 2006. “This has increased our turnover. If I advertise African cloth on television, most buyers go to the competition as Chinese imports dominate the market. So what we do is introduce special collections a couple times a year, with eight to 12 designs of three or four colourways. On television we advertise our own collection, which has not yet been copied by the competition so the revenues go to CICAM. Customers ask for our products.”

These strategies, coupled with a reduction in unit costs, have certainly paid off: when Mr Polidori took over four years ago, the company was burdened by overwhelming debts and heavy annual losses, despite government efforts to buoy CICAM with measures such as tax exemptions. After just one year, turnover rose 13 per cent and a profit was recorded for the first time in years. “In 2009, there was a big slump all over the world – even the Chinese lost 15 per cent in their textile activities. However, CICAM increased turnover by 10 per cent followed by 11 per cent in 2010. So in just four years we increased turnover by 65 per cent,” says Mr Polidori.

Growing demand for CICAM’s textiles means plans for greater investment and production. Mr Polidori says CICAM intends to increase production capacity by more than half through a €15 million investment programme in the company’s spinning and weaving factory, with help from the government. In under 10 years, CICAM intends to raise yearly cotton fabric consumption from 3,000 tonnes to 8,500 tonnes and eventually rising to 12,000 tonnes; a process that will create jobs for 1,000 people directly and some 15,000 people – including tailors and craftsmen, market workers and retailers – indirectly.

veseke tande martin
100% of 1
I have gone through the Kenyan fabrics and quotations are made on the price range of the different fabrics and on quantities that they can be purchased. I hope you also do likewise as this will resolve the problem of coming to Douala
to make inquiries on possible purchase.