While the Latin American economy as a whole contracted 0.3% in 2015, Mexico’s grew 2.5%, despite setbacks such as the plunge in oil-prices. World Bank chief economist Augusto de la Torre says that Latin American economies will continue to experience difficulty unless they follow the lead of Mexico by adopting deep structural reforms 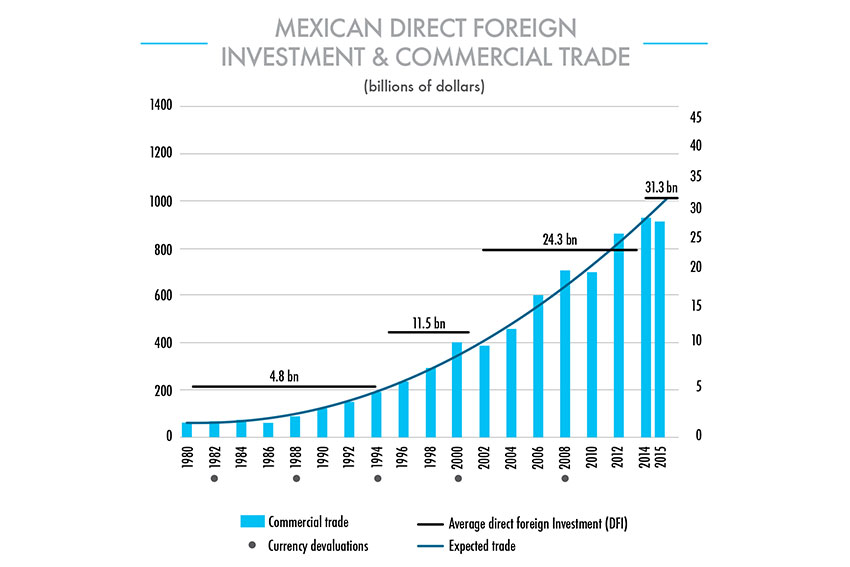 Low commodity prices, plunging currencies and stock market sell-offs across emerging markets have hit Latin America particularly hard this year. Nonetheless, despite these harbingers of economic stress, Mexico’s economy is growing, unemployment is falling, and the country’s debt was upgraded earlier this year.

Last year GDP grew by 2.5%, well above the Latin American regional average of -0.3%, making Mexico one of the region’s best economic performers.  “Private consumption became the main driving force of economic activity on the back of stronger job creation, real wage growth, and credit expansion,” states the World Bank, which forecasts growth to slow slightly this year. In its latest forecast, Mexico’s central bank predicts growth of between 2% and 3% this year, while the IMF predicts 2.4% expansion in 2016 and 2.6% in 2017. This is in stark contrast with Brazil, whose economy the IMF predicts will contract 3.8%  in 2016.

Mexico continues to be among the countries with the highest number of free trade agreements, making it a strategic destination for foreign investment. As a member of Mercosur and the Alianza del Pacífico, Mexico is well placed to internationally export the goods it manufactures. Its trade links integrate it with markets that make up 40% of the global GDP and by extension, to 25% of the commercial value of the entire planet. In October of 2015, along with 11 other Pacific countries, Mexico came to an agreement over an extensive commercial pact to reduce trade tariffs and establish a system of best practices for all participating nations. Known as the Trans-Pacific Partnership (TPP), the pact is intended to facilitate trade, stimulate investment, and encompasses Japan, Brunei, Chile, New Zealand, Singapore, the United States, Australia, Peru, Vietnam, Malaysia, Canada and Mexico. Together, these countries represent a market of 800 million people and for Mexico in particular, being a member of this pact represents an excellent opportunity – one of the most promising of his term, according to Mexican President Enrique Peña Nieto. “The TPP will generate ample opportunities for investment and employment for Mexicans,” he told CNN.

In practice, this pact is intended to give Mexico preferential access to some of the world’s biggest economies and open up new channels of export for sectors such as automotive, electronics, agro-industrial goods, steel, and cosmetics. As pointed out by Mexican Secretary of Economy, Ildefonso Guajardo, Asian-pacific countries that Mexico has not engaged in commerce with before – such as Australia, Brunei, Malaysia, New Zealand, Singapore and Vietnam – will be of particular interest, as this region of the world is predicted to grow the most over the next 25 years. The combined effect of increased exports and climbing domestic consumption is expected to reinforce production chains across Mexico, the United States and Canada. As a part of this pact, work standards will be established, as will new codes for the protection of intellectual property and the environment.

Christine Lagarde, managing director of the IMF, has recognized the importance of this pact, which will strengthen manufacturing and production bonds across North America, especially between the United States and Mexico. The two countries engage in $600 million worth of bilateral trade a year; a number which is expected to dramatically increase following the implementation of the Diálogo Económico de Alto Nivel (High-Level Economic Dialogue, DEAN). An agreement aimed at developing greater points of contact across Central America, DEAN is centered on the development of new energy sources and the creation of a gas pipeline that reaches Guatemala.

During her participation in the third round of DEAN discussions, U.S. Minister for the Interior, Sarah Margaret Roffey Jewell congratulated Mexico on its ambitious reforms and expressed excitement at finding ways for Mexico and the United States to work more closely on developing more environmentally friendly and sustainable practices for the energy sector.

An ambitious overhaul
Further working to Mexico’s advantage are its strategic geographic location and unprecedented legislative and regulatory reforms which have facilitated investment, private-public sector partnerships, and paved the way for stimulus in other areas of the economy by increasing demand and employment. Its two most notable reforms were in the areas of obtaining credit and paying taxes, though to date; it has modified three articles of its constitution and 22 secondary laws in addition to other modifications. Though late to realize its need for reform, Mexico has been praised for swiftly and effectively implementing change and for being the country in Latin America which has made the most reforms over the past five years. As a result of the favorable economic impact that these reforms have had across various areas of the economy, Mexico is now in a unique position as compared with its neighbors in Latin America. “According to the National Association of Autoservice Stores, consumption has gone up in Mexico which is a sign that we’re starting to see the impact of these reforms,” says Georgina Trujillo, federal deputy and president of the Energy Commission of the LXIII Legislature. Nobel laureate in economics, Paul Krugman went as far as to say that “Mexico looks more like Canada than Brazil,” explaining that although its currency has fallen, there doesn’t appear to be financial stress and inflation is tolerable.

Likewise, Vicente González, Director General of Geo Estratos, believes that Mexico has huge economic potential. “The region must seize the opportunity offered by the energy reform, and we need to see the oil business as an energy business and as the main demand-driven opportunity for Central and South America,” he says, arguing for the importance of seeing oil not only as a commodity but part of a larger value chain.

In addition to now having more opportunities and greater resources with which to weather the blow of plummeting energy prices, the World Bank now ranks it as the strongest economy in Latin America and has improved its global ranking to 38 of 189 economies worldwide. According to chief World Bank economist, Augusto de la Torre, economic reforms will be key to fostering future growth. Economic growth across Latin America has already slowed down significantly and will continue to do so unless ambitious structural reforms are adopted. In this regard, Mr. de la Torre cites Mexico as an example for how other countries in the region can address similar problems. He told El Financiero that Mexico has fared especially well in terms of its educational reform and the improved inclusiveness of its educational system – an area where other countries in the region have been suffering. Mexican leaders were equally well served in their reforms of the telecoms sector, which has been modernized following a deficit dating from the 1960s and 70s. Overall, he argues that Mexico is addressing aspects of its economy that are problematic across the region, and has set an excellent precedent for its neighbors to follow suit.

The fruits of one of Mexico’s ambitious energy reforms are already being reaped. Yves Hayaux-du-Tilly, who has practiced law in Mexico since 1991 as a partner at Nader, Hayaux & Goebel, believes that Mexico’s energy reforms will eventually create jobs, put money into the pockets of Mexicans, and increase consumption. They will also have a significant impact on the price of electricity, which according to Hayaux, is one of the most significant costs of the manufacturing industry. “For the economy to grow, Mexico needs to export more, attract more foreign investment and boost consumption. Here you have the advantage of energy reform, which can prompt all three of these things,” said Hayaux.

According to Carlos Morales Gil, CEO of Petrobal – the oil and gas exploration and production arm of the Grupo Bal conglomerate and Mexico’s first private oil company – as a country that has hydrocarbon and renewable energy resources, it’s important for Mexico to have an appropriate and modern legal framework so that its resources can be used. “It is fundamental to create the legal structure that permits their use,” he says, adding that one of the elements that businesses look for is corporate and legal certainty. “This is the most important goal in terms of legislation that has been achieved in Mexico in recent years, and it will be the reason people are going to say, ‘Yes, I want to go there; I want to go to Mexico to invest.’”

Sean McCoy-Cador, International Counsel at Chadbourne & Parke LLP is of a similar mind, but insists that regulators should be careful not to fixate too heavily on certain regulations. “They must punish conduct that goes against free competition while still allowing for market flow,” he says.

Benjamín Torres Barrón, a partner at Baker & McKenzie agrees but is more cautious of what lies ahead.  “I think the regulatory framework has undergone a profound, complex, and complete transformation, but the final pages of that book are yet to be written,” he said. “2016 is still a vital year for the completion and even the first implementation of projects. All kinds of new elements appear every day – regulations, methodologies, guidelines, etc. – that strengthen the regulatory scaffolding of this country.”