Article - October 24, 2011
A microcosm of landscapes, flora and fauna, Cameroon is often referred to as ‘Africa in miniature’ 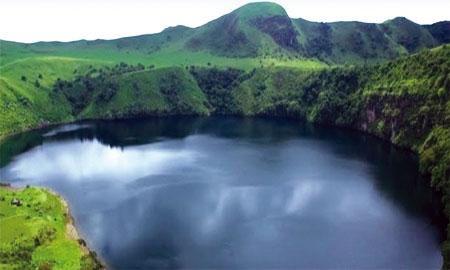 MANENGOUBA LAKE AND THE EKOM WATERFALLS, WHICH DROP 260 FEET, MAKING THEM THE HIGHEST WATERFALLS IN CAMEROON
SHARE

Situated at the intersection of Western and Central Africa, and at the southern end of the Sahara Desert, geologically diverse Cameroon boasts beaches, deserts, mountains, rainforests and savannas. The country’s nickname, “Africa in miniature”, is certainly no exaggeration.

Forests are one of Cameroon’s main features and the southern rainforest alone covers over one-third of Cameroon’s total land area. Consequently, logging is big business. Cameroon’s Government, however, strictly regulates the exploitation of its forests and punishes illegal logging. Before the 1980s, this had gone largely unchecked, while the deforestation was further aggravated by the clearing of lands for agriculture. There has been an about-turn since then, with the Government taking a stronger stance on the issue and embracing the concept of sustainability.

Minister of Environment Pierre Hele explains that despite the urgency of pressing short-term needs, a long-term vision that balances productivity with conservation proves more economically and socially viable. “Presently when we talk of protection we should mostly understand that to conciliate protection and development or the satisfaction of the needs of communities, we should talk about the notion of sustainable management – meaning that we should be able to consume the product without destroying the existing capital,” he says.

There are 18 national parks and another 18 protected areas, covering a total of just over two million hectares. The country’s 22 million hectares of forest cover comprise Africa’s second most important forestry reserve, and currently Cameroon is the world’s sixth largest exporter of tropical timber.

Residing within these forests, as well as on the savannahs and grasslands further north, are more than 400 species of mammals (including gazelles, giraffes, lions, ostriches, rhinoceroses and elephants), nearly 700 species of birds and over 180 species of reptiles.

While southern and coastal Cameroon enjoy heavy rainfall, the northern part is becoming increasingly dry. In an attempt to block, or at least slow, the encroaching desert, the Government has stepped up its 30-year old “Operation Green Sahel” programme, which began with tree planting and community awareness and has since expanded to include the distribution of special ovens.
Local communities greatly rely on wood for their survival – especially for cooking. Consequently, the Ministry of Environment commissioned the production of special ovens for household use that require only a small quantity of firewood. “In order to avoid the excessive felling of trees, we thought of setting up a system of special ovens. We had 49,000 made,” explains Mr Hele.

The Government is also actively protecting its wetlands – some of which have been recognised as national heritage sites – its biodiversity, and its marine ecosystem, as well as improving its water and wastewater management.