Article - October 25, 2012
Chile produces some of the world’s most popular wine, fruit and fish, benefiting from low production costs 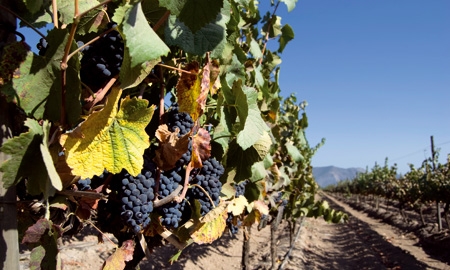 CHILE IS THE WORLD’S FIFTH-LARGEST EXPORTER OF WINE
SHARE

Spanning 4,000 kilometres along the Pacific coastline, Chile enjoys varied climates that allow for its agricultural market to be among the most competitive in the world. Chile currently supplies 174 countries worldwide with both fresh and processed food products totalling over $10.5 billion per year, 24 per cent of the country’s GDP.

Over the past decade, this Latin American nation has registered 10 per cent growth in food exports annually. By 2030, the agriculture sector is expected to make up 35 per cent of Chile’s GDP and employ one in three workers within the country.

Benefiting from various advantages over its European competitors, Chile offers lower production and real estate costs. For example, it is currently the world’s second-largest salmon producer after Norway, but has possibilities to surpass this Nordic nation due to its lower production costs.

Although produce, salmon and wine compose a significant portion of Chile’s exports, the country also has a booming dairy industry. The nation’s largest cheese producer, Colun, has over six decades of experience. Founded in 1949, it is a cooperative of farmers who work together to maintain high quality Chilean dairy products.

Although one of Colun’s principal concerns is the quality of its product, the cooperative is also committed to both environmental preservation as well as modernisation of production technologies.

"It is important to us that the machinery we are going to acquire is the latest technology available in the market," remarks company President Augusto Grob. "Our Department of Development has professionals who are constantly innovating our products for the internal and external market."

Another leading agribusiness company, Empresas IANSA, specialising in the marketing and production of sugar beet by-products, is also highly committed to innovating agriculture in Chile, in part through international exchange with Germany.

Furthermore, IANSA is the parent company of the country’s top exporter of non-citric juice concentrate in the southern hemisphere, Patagonia Fresh, who exports to North and Latin America, Asia and Europe.

Through its five decades working in agriculture in Chile, IANSA understands the significance of the industry for stimulating the economy. Joaquin Norguera, President of IANSA notes: "Agribusiness is a very important driving force to foster and contribute to the economic development of the country and to provide the best food conditions to our citizens."