Article - June 10, 2013
AG&P Chairman Joseph Sigelman has built and transformed start-ups in Latin America and India into large corporations, creating thousands of jobs. In 2010, he turned his attention to the Philippines – one of the fastest growing emerging economies in Southeast Asia 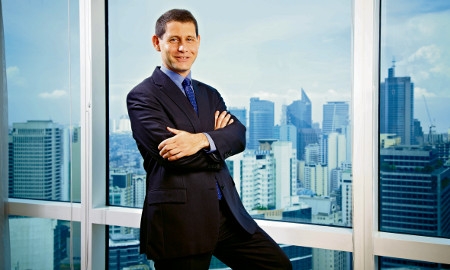 Established in 1900, Atlantic, Gulf & Pacific Company (AG&P) is synonymous with the Philippines’ construction industry, working across the engineering and construction spectra on key projects ranging from the country’s first steel bridge, Manila’s water and sewage systems, a major convention center, skyscrapers and national monuments.
In just over two years, NYC-born Joseph Sigelman, Chairman of AG&P since 2010, has transformed the 112-year giant into the only Philippines-headquartered multinational company providing modular engineering, fabrication, modular construction and asset support services to the oil and gas, mining, power, and civil infrastructure sectors.
From 300 people working in the company’s heavy fabrication yards in December 2010, Mr. Sigelman has grown AG&P to a base of over 3,000 people.
It is in its 150-hectare state-of-the-art yards in Batangas, the largest heavy fabrication yard in Southeast Asia, where AG&P employees make the company’s modular construction, or “Modstruction” magic happen.
Going beyond the traditional steel and pipe definition of modularization, Modstruction is a holistic approach to global infrastructure projects. The company uses its vast knowledge of modular fabrication to help customers plan, design, engineer, and construct large infrastructure projects. It delivers and assembles the modules where they are needed, performs operation and maintenance services, and, ultimately, decommissions and disassembles modules at the end of the their useful lives.
“AG&P’s Modstruction also allows for parallel processing at multiple facilities so that projects are finished faster than in a normal construction setting, where they are constrained by a linear progression. This means that our clients can drive revenue from projects far sooner than with traditional approaches,” explains Mr. Sigelman.
AG&P modularizes infrastructure, some as large as seven stories tall and weighing thousands of tons, which leave the fabrication yards for job sites all over the world via heavy-lift ship or container.
The company is supporting the country’s growth by training and employing Filipinos, driving international business to its local yards, and providing opportunities for its people to gain experience abroad through its Overseas Manpower Division.
“Our obligation to the community doesn’t stop at employment in our yards. Education is the most powerful way to influence the future of the country and our employees receive ongoing training to maximize their potential,” says Mr. Sigelman, who adds that Filipinos exhibit “unrivalled passion and dedication to their work.”
“There is a Philippine flag flying on top of some of the most complex infrastructure projects in the world,” he says. “Our employees are proud to be a part of these projects and the impact they are having on the reputation of the Philippines the world over.”
A man driven not by money but by the passion for making a difference and a meaningful change where it matters the most, Mr. Sigelman is revolutionizing how the construction and infrastructure worlds do business and at the same time, catapulting the Philippines on to the global stage.