Oleomex: a sustainable family business and partner in the agroindustry sector

Article - December 2, 2013
Oleomex was founded in 1978 in Guadalajara, Jalisco, as a small company specializing in the extraction of coconut oil, to be sold commercially for use in the production of soap 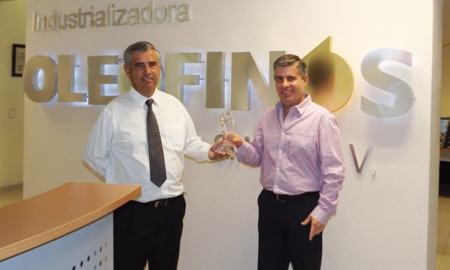 Today, 35 years after its establishment, Grupo Oleomex is comprised of 11 different businesses, including the official state bank of Bansi, and is one of the main providers of natural oils and similar raw materials to some of the most important national and transnational companies in Mexico. It is still a family-owned company but now employs over 1,500 people and boasts US$285 million in annual revenue.
In 2012, the group’s Industrializadora Oleofinos was named “Best Supplier of the Year” by Mexico’s Grupo Bimbo for its commitment to excellence and production of high quality materials and services, contributing to the success of Grupo Bimbo.
Over the years, Grupo Oleomex has not limited itself to the extraction of coconut oils to be used in soaps, but has expanded to include the extraction and refining of a variety of oils such as palm, soy, and canola oils, for its own consumer products and commercial sale. Today, Oleomex has a hand in the production of vegetable oils, special butters, edible oils, oils from meat and poultry, cookies, shampoos, natural waxes, and is beginning to explore the wide range of agave products that can be marketed worldwide.
The state of Jalisco fabricates a variety of first-rate consumer goods in the food and dairy industries that satisfy all the parameters of the quality expected in the competitive global market. Production methods for many of these goods also comply with international standards of quality and sustainability.
In Mexico, like in many parts of the world, the demand for quality palm oil, and thus the cultivation of the African palm, is steadily increasing. In some places this has lead to reckless farming methods which have had devastating effects on ecosystems in several countries, most notably Indonesia.
Grupo Oleomex would like to see Mexico reap the financial benefits of the lucrative African palm now, and for many years to come. Because of this they work carefully to follow the regulations for responsible farming proposed by the RSPO, the Roundtable on Sustainable Palm Oil. Oleomex President José Luis Pérez Morett says the guidelines help them focus on developing feasible cultivation methods that respect ecological and social issues, “so that these types of plantations are totally sustainable, and we don’t harm the community or the environment,” thus ensuring the long-term benefits of their investments.
As the son of the original founder of Grupo Oleomex, Mr. Pérez Morett has closely followed its growth from the beginning, as well as the growth of the country’s agroindustry sector. He is keenly aware of its shortcomings and, above all, its potential.
Recognizing where investment in this sector would give way to significant improvement, he explains that Mexico does not currently meet its potential in terms of agricultural production or the cultivation of raw materials needed in his industry. He points out that “85% of all oilseeds of the oils and fats consumed in Mexico are imported,” despite climate conditions favoring the cultivation of such plants.
The Mexican agroindustry, however, is currently undergoing many changes. Globally, the price and demand of palm oil is rising. Locally, agricultural reforms proposed by President Peña Nieto include plans for better irrigation systems as well as support for the acquisition of much needed fertilizers, the lack of which for many years has inhibited a great number of farmers from reaching maximum production. If these reforms are successful, the president of Oleomex believes Mexico could double the performance yield of its countryside.
With respect to Jalisco’s farmland, Mr. Pérez Morett calls for diversification: “We have to change and take advantage of local conditions where it’s better to produce oilseeds than not.” This means moving away from the archetypal exported crops of corn, wheat, and beans – easily produced in any other part of the country – toward crops that would support local industry. Such diversification would greatly benefit the agroindustry sector of the country by offsetting the amount of raw materials companies like Oleomex are forced to import from other countries.
Until now, Grupo Oleomex has operated mainly from the state of Jalisco in which it was founded, although in 2009 a new plant in Veracruz, Mexico, was opened for the refining and deodorizing of vegetable oils. Within the next 10 years, the president of Oleomex envisions the expansion of the group throughout Mexico and beyond.
The group has already purchased a small company in the United States to help with the procurement of raw materials for their own line of consumer goods. In addition, they hope to amplify the distribution of goods like Léon and MaxTen soaps for all skin types, Torre and Sin Mancha laundry soaps, and Hogar soy and vegetable oils, which are already household names in Mexico.
Mr. Pérez Morett believes that the success of family-run Grupo Oleomex has been due to responsible business practices and goal orientation. In the future he hopes to find foreign allies and partners interested in contributing to the growth of the Mexican agroindustry and sharing in the benefits.