Article - December 3, 2013
As the U.S.-Mexico Chamber of Commerce sees trade and investment grow at unprecedented levels, Mexico is also keen to diversify its export markets 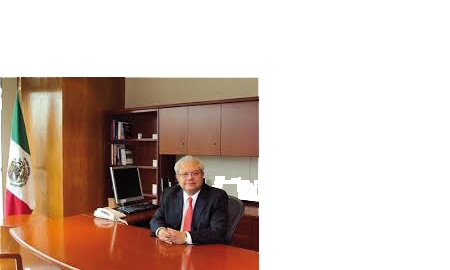 Although the United States and Mexico share a border of some 2,000 miles long, the resulting indelible association between the two neighboring countries means that their relationship together in all walks of life possesses no such distinct boundary.
While most may familiarly recognize the many diverse cultural influences that each nation has had upon each other due to their close proximity, one connection that seems to know no limits is that of cooperation in trade and investment.
Last year the two countries jointly recorded an all time high in their bilateral trade, reaching a total of US$493 billion; 7% higher than in 2011.
These figures are just the latest example of an unstoppable economic partnership that has witnessed incredible growth over recent times.
Since the enactment of the North American Free Trade Agreement (NAFTA) in 1994, trade between the two countries has more than tripled. Meanwhile, U.S. foreign direct investment (FDI) in Mexico has experienced a massive 440% increase from US$17 billion to over US$90 billion in the same period of time.
The organization that can be credited with building up such strong bilateral business ties is the U.S.-Mexico Chamber of Commerce (USMCOC). Though the chamber’s coalition of distinguished businessmen and women has been helping promote trade, investment and combined ventures on both sides of the border for over 40 years now, President of the group’s Mexico City office – José García Torres – says that undoubtedly “the great relationship that exists today is as a result of the free-trade agreement.”
Paying testament to the work of USMCOC, he continues: “During the negotiations of the NAFTA we played a very important role to facilitate and help understand exactly what the two countries sought, and that is something we have continued to do systematically.”
Indeed thanks to the positive effect of the chamber and their efforts to implement the NAFTA, Mexico has since become the U.S.’s third largest trading partner, while the States is Mexico’s largest trading partner by far. If you add NAFTA’s third member Canada to the equation, the countries together form the largest free trade area in the world – accounting for around one third of the total global GDP.
Along with a variety of exports, such as agriculture and machinery, in 2012 Mexico was a major supplier of foreign crude oil to the U.S. However, with over 75% of Mexico’s exports and over half of imports going to and from the northern neighbor alone, Mexico has also been keen diversify its markets.
Last year’s announcement that the Trans-Pacific Partnership (a pact which includes the U.S. and nine other countries) had formally extended an invitation to Mexico for negotiations over a proposed multilateral free trade agreement means the country now stands to benefit even further in the reduction of economic barriers, not only with its northern neighbors, but with some of the other key global markets too.
“While our export commodities are diversified, our exports markets are not. The purpose of the Trans-Pacific Partnership (TPP) is for our diversification, not only in China for example, but Japan and Korea,” says Mr. García Torres.
“While also being very important partners of technology, they also need our raw materials and we need the turbines and boats that are manufactured there. For that reason I think the TPP will have a great importance for Mexico’s new partnership with these countries.”
In further efforts to increase trade with other countries in recent times, Mexico has achieved a total of 12 FTAs involving 44 countries.