As Japan looks to strengthen its presence on global markets, particularly in Southeast Asia, it has focused on selling itself as a developer of high-quality projects and alternative to Chinese investments. 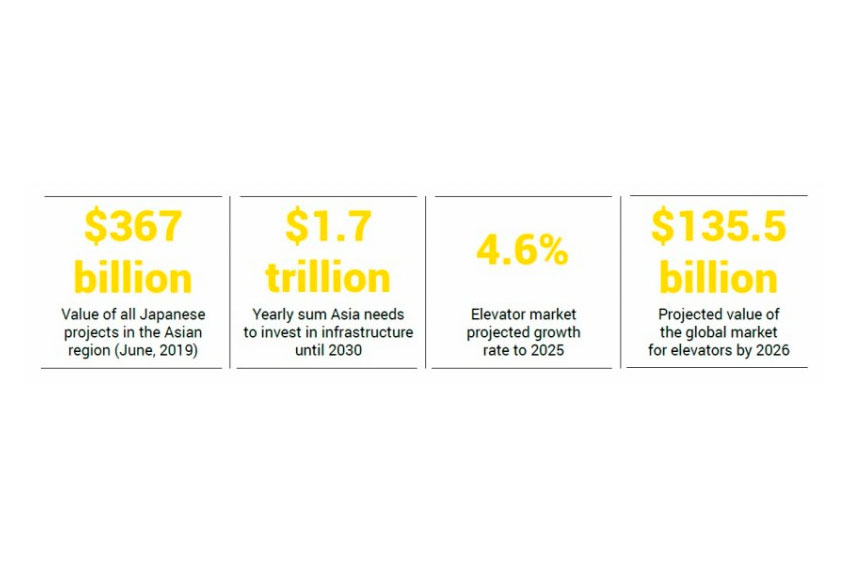 Japan’s shrinking domestic market has forced the nation’s construction companies to turn their attention to opportunities abroad. And fortunately for these firms, while their own domestic activities have waned, investment opportunities have expanded rapidly in Japan’s own backyard.

As one of the world’s fastest growing regions, Southeast Asia has developed an almost insatiable demand for infrastructure and construction projects to fuel its economic aspirations. The Asian Development Bank has estimated that Asia needs some $22.6 trillion worth of infrastructure investment between 2016 and 2030 – 24% of which will be required in Southeast Asia.

Like in many other industries, Japan’s construction firms face stiff competition from China when bidding for infrastructure projects. But so far, in the Southeast Asian region, it is a battle that Japan has been winning. As of June 2019, Japanese projects in the region had a total value of $367 billion, compared to China’s $255 billion. A large part of Japan’s success can be attributed to its focus on selling itself as a developer of highquality infrastructure projects. And this focus on quality, efficiency and reliability has stood Japanese construction firms in good stead, as well as those supplying materials, machinery and other equipment, such as Hitachi Construction Machinery.

“In countries such as Indonesia, India or Thailand, they really want to have efficient investments. They aim to increase the efficiency of their infrastructure, which represents a big business opportunity,” says Hitachi CEO, Kotaro Hirano.

But Southeast Asia is not the only region representing opportunities for Japan. In India, Japanese firms are actively involved in a number of projects, including high-speed rail lines, subways, energy, sanitation and smart cities. In February, the U.S. and Japan signed an agreement to jointly encourage more private investment in energy and infrastructure projects. This followed a similar infrastructure cooperation pact signed between the EU and Japan in September, 2019.

Like Hitachi Construction Machinery, SEC – a leading manufacturer of elevators, escalators and related components – sees ample opportunities arising from such initiatives to expand Japanese construction and infrastructure projects worldwide. With 50 years of experience on the Japanese domestic market, where it has built a solid reputation for high quality and innovation, SEC now has set its sights on pursuing global growth. The Tokyo-based company has already entered the Southeast Asian market through its Philippines subsidiary and has prioritized collaboration with foreign counterparts to further penetrate Southeast Asia and beyond.

“We have been receiving requests to provide services in various countries. We are currently doing business in several countries with companies that are interested in our services and asked us for help,” says CEO, Takao Suzuki. “We would like to partner with companies under the condition that they can contribute to the international community.”

To play a larger role in international markets, SEC is leveraging on its innovation and research capabilities to develop new products, such as its new thermal energy system utilizing an innovative incinerator that provides the triple advantage of burning all kinds of combustible waste, including plastic.

“We have succeeded in reducing running costs by eliminating the need for gas, kerosene, and gasoline, which is the privilege of using this waste as fuel,” says Mr. Suzuki. “We believe that this incinerator (boiler) is a product that will contribute to the world by processing vinyl, plastic bottles, and plastic sheets worldwide, or by processing food waste, wood, and any combustible waste.”

Such innovative products fall very much in line with Mr. Suzuki’s dream: “My dream is not only to make SEC a worldfamous brand, but also to continue to develop quality and safety in pursuit of becoming a company that is appreciated by people around the world.”