Reforms in the health sector are improving access and public services. Over 1000 health centers and 200 hospitals are being constructed throughout the country in order to improve and modernise access to the health system 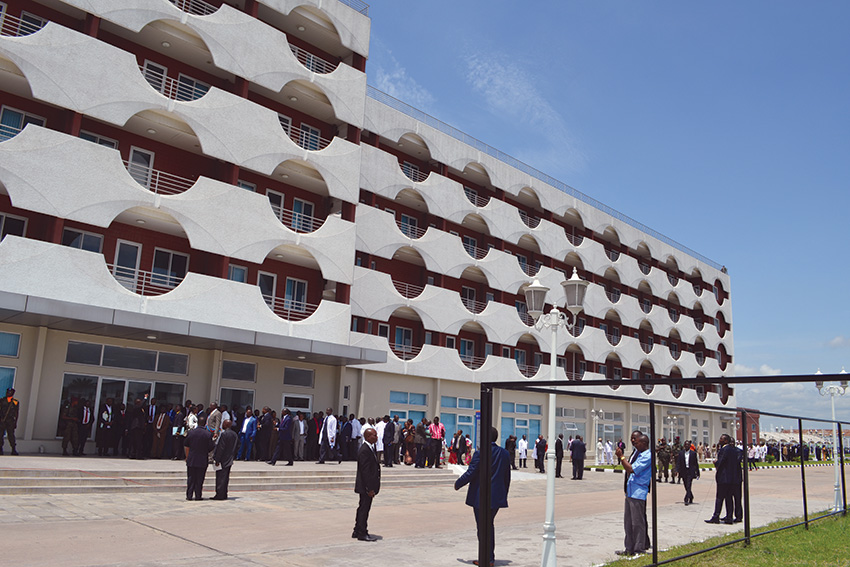 In spite of the significant success achieved, the DRC’s health sector is still faced with serious challenges. While it has managed to reduce the maternal mortality rate by one third – from 1,289 per 100,000 births in 2001 to 730 per 100,000 births, according to the 2015 U.N. Human Development report – the DRC still has one of the highest such rates in the world. Child mortality is also a major concern: nearly 9 per cent of children die at birth and 10.4 per cent do not reach the age of five.

To reduce the mortality rate in infants, the government has undertaken concrete actions, such as a vigorous vaccination campaign against polio, integrated management of childhood related illnesses, and breastfeeding and vitamin A supplementation. These measures have led to some important achievements, such as the reduction of the mortality rate in children under five years – from 21.3% in 2001 to 10.4% in 2013 – and a significant increase in the number of children receiving the measles vaccination – up from 38 per cent in 1990 to 71.6 per cent in 2013.

In December 2015, the World Health Organisation  (WHO) declared the DRC a “country free of wild poliovirus.” DRC Health Minister Félix Kabange Numbi announced that the country was doing its part to edge the world closer to eliminating polio. “I am confident that we will one day eradicate polio. This will be one of the greatest achievements of human history, and it will have a positive impact on global health for generations to come.”

A decentralisation strategy has also been put in place to improve the population’s access to health throughout the country, and $80 million (£55 million) have been allocated by the government to implement the Equipment of Health Facilities Programme (PESS). This program will see the construction of 1,000 health centers and 200 general hospitals across the Republic, the opening of credit lines to health facilities for the supply of medicines and the purchase of contraceptives, the acquisition of materials and medical equipment, as well as training of service providers.

An effective implementation of the decentralisation strategy and a reform at provincial and intermediate levels are necessary in order to improve access, with a special focus on rural areas. These measures accompany the National Health System Strengthening Strategy, which foresees the establishment of Provincial Health Divisions based on the configuration of the country’s new provinces. “The reform process and modernisation of the public health administration in the DRC are progressing in an irreversible manner with the participation of everbody and the support of our partners”
Felix Kabange Numbi, Minister of Public Health

“The reform process and modernisation of the public health administration in the DRC are progressing in an irreversible manner with the participation of everybody and the support of our partners,” says Mr Kabange.

As part of the reinforcement strategy, the government is also focusing on data collection and analysis through the National Population and Habitat Census in order to build an effective and resilient health system which takes into account the country’s territorial particularities.

To support these reforms, the government has increased the budget allocated to the health sector, which reflects the growing commitment and determination of the government to actively work to protect the population through an effective health system. This increase is already gradually improving the access to health services.

With the support of international partners such as the World Bank, Unicef and the WHO, the DRC is further engaged in the fight against HIV/AIDS and pandemics such as malaria, diarrheal diseases, acute respiratory infections, tuberculosis and communicable child diseases – measles, poliomyelitis, neonatal tetanus, trypanosomiasis and onchocerciasis.

In collaboration with Unicef, the country has established a programme that offers simplified antiretroviral treatment to pregnant women to prevent mother-to-child transmission of HIV. Other internationally backed health programmes aim to provide children and women with a package of immunizations, vitamin A, and de-worming, along with easily understandable information about family practices to improve health and nutrition.  Community based programs have also been launched throughout the country to manage malnutrition, another priority action area.

After numerous studies and research, the government has determined that in the purchase of vaccines, the fight against communicable illnesses such as HIV and tuberculosis, and non-communicable diseases such as malaria should be the priority.  Based on these studies, the government has invested in more than 50 programmes, focusing on areas such as biomedical research and expansion of the national vaccination programme.

As one of four pilot countries to benefit from  the Global Financing Facility, a key financing platform of the United Nations Secretary General’s Every Woman Every Child Global Strategy, the DRC will have access to new funds to help improve women and children’s access to quality health services.

In this context, the country is preparing a new health development plan 2016-2020, and the Long-Term Health Sector Financing Strategy until 2030, when the nation aims to reach emerging status.