The government has launched an important project for the construction of a large fibre-optic national network. In the next five years, they plan to deploy between 30,000 and 50,000 kilometres of fibre-optic cables and to use satellite communications for areas that cannot be reached 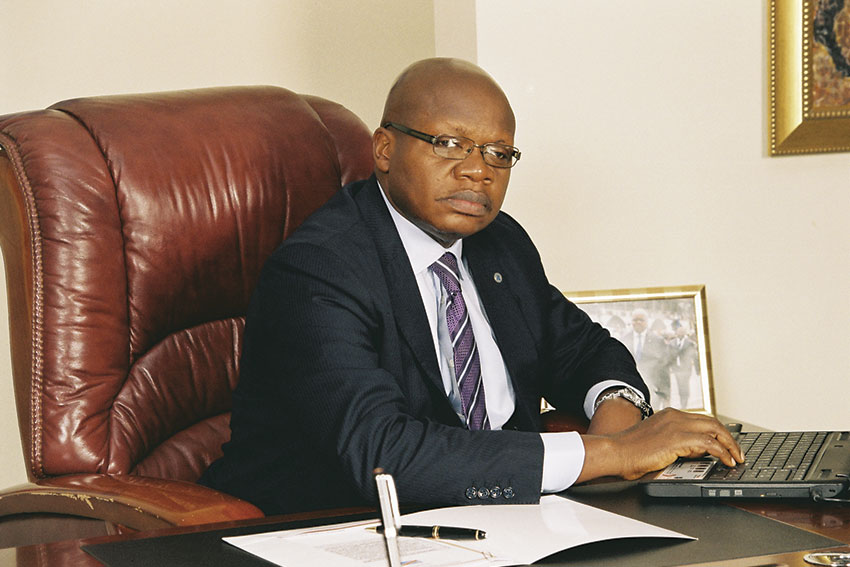 As the DRC looks to further diversify, develop and modernise its economy, one area with obvious potential is the ICT sector, which could not only add significant amounts of productive capacity to the country’s economy, but also give its overall level of development an enormous boost. The beginnings of an information revolution are already present: in just 15 years, the DRC went from having 300,000 mobile phone users to more than 25 million today. Even as staggering as this turnaround has been, the countries relatively low penetration rate indicates latent demand and potential for further development.

“In the beginning, the state held a monopoly in the sector,” explains Thomas Luhaka, Deputy Prime Minister, and Minister of Posts, Telecommunications and Information and Communication Technologies. “Then there was a partial opening of the sector in the 1980s, but the real liberalisation didn’t arrive until 2002, with the new telecommunications law, which allowed several foreign carriers to enter the market and to effectively and efficiently launch the telecommunications industry in our country.” Its late entrance into the modern competitive era of ICT means that the DRC has a lot of catching up to do.

“Right now, we’re in the process of updating our legal framework to adapt to the evolution of communications technology. It’s the acceleration of the modernisation of telecommunications in the DRC.”

As a continent-sized country with very underdeveloped infrastructure, the DRC seeks to grow its mobile consumer network. To facilitate access to the country’s underserved rural areas, and reduce the social divide between the cities and small towns and villages, the government has launched an ambitious and critical project for the construction of a large fibre optic national network. In the next five years, the government plans to deploy between 30,000 and 50,000 kilometres of fibre-optic cables across the country.

Industry leaders see enormous potential for the sector to contribute to GDP growth, as well as job creation, helping to accelerate the economic diversification toward digital services. With a population approaching 77 million and a penetration rate of just 49 per cent – compared to more than 100 per cent in many industrialised countries – only a very small portion of the population has access to telecommunications. Yet even in this underdeveloped state the sector is currently the second contributor to government revenues.

“With new information and communication technology, it is now possible to access knowledge like never before. This is pivotal as it impacts all sectors. It will allow us to leap forward”

“With today’s new information and communication technologies, it is possible to access unlimited knowledge. This is pivotal in today’s economy, for it impacts all sectors and will allow us to leap forward,” says Mr Luhaka. “The development of this network, of this national telecommunications backbone, will allow carriers to operate over the entire national territory, reaching the most remote and underserved populations. We have an enormous asset, a vast country of more than 2.3 million square kilometres, which represents an advantage. The difficulty is in extending critical infrastructure across this territory, but the policy of the fibre optic development will allow us to reach the most difficult areas of the country.”

Currently, the DRC is in phase two of its five-year fibre optic development plan. Phase one consisted of the West African Cable System, which was put into place from the Atlantic coast to Kinshasa, some 630km, and is now operational.

Phase two will link the east and west of the DRC’s massive territory, and consists of a total of 3,300 more kilometres of fibre-optic cable infrastructure. In addition, the DRC secured funding from the World Bank for the construction of an aerial fibre-optic line, stretching for some 3,000 kilometres and extending service to thousands of potential subscribers. The government has also entered into talks with Google to develop a fibre-optic urban ring in Kinshasa as well as in the cities of Lubumbashi and Kisangani.

Modernising the country’s ICT sector also means training a new cadre of workers to help service and maintain the country’s infrastructure. The government has encouraged the implementation of training programmes through different private and public technological institutes and training centres, in order to equip technicians, engineers and computer scientists with the necessary skills and knowledge to build and maintain a fully modern communications network.

“Just last year we inaugurated a workshop organised by the Higher Institute of Applied Techniques (Institut Supérieur des Techniques Appliquées -ISTA), in partnership with private operators, to determine the profile of the technicians that the operators need,” explains Mr Luhaka. “We always encourage the institutes of training and education to adapt to the information and the needs of the operators in the field. This is a real necessity. We endeavour here at the ministry to encourage the institutes, whether they be private or public, to teach using the new information and communications technologies. This helps us to attract new technologies to the sector through the country’s youth. Young people are naturally attracted to the ICT industry. We also work with our foreign partners to secure scholarship money so that our students can go to learn the best practices and newest technologies being applied abroad. We have partnerships with Japan, South Korea and China.”