As the digital revolution transforms business, society and the global economy, Egypt’s growing ICT sector is laying the foundations for sustainable progress. 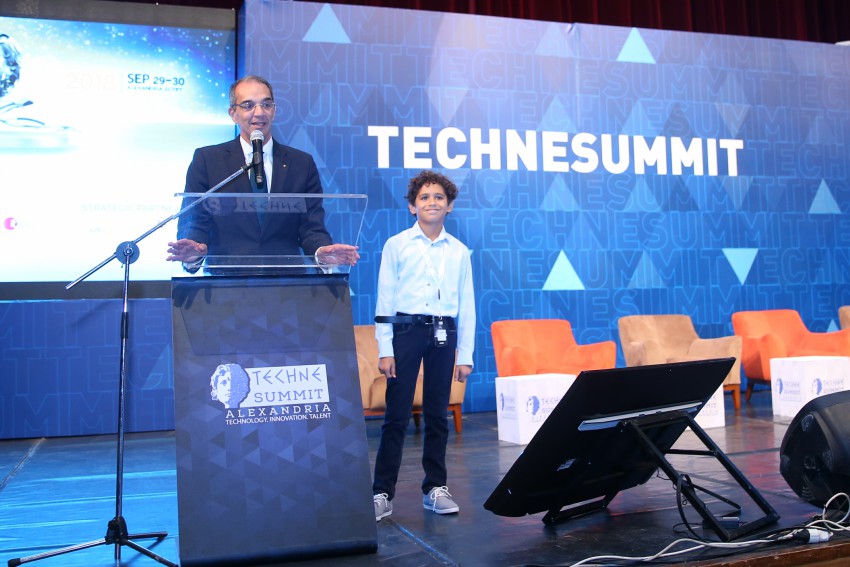 MINISTER OF CIT DR. AMR TALAAT AT THE TECHNESUMMIT
SHARE

The Egyptian ICT sector is on a steady tick upwards, bringing with it sweeping changes that are touching every sector. Tipped at 15 percent growth for the current fiscal year, the government aims for the sector to contribute 5 percent to the country’s economy within the next three years, up from 3.2 percent in 2017, as it transforms Egypt into a digital economy.

“The ICT sector grew by 14 percent in Q1 and 16.2 percent in Q2, which is an enhancement to what has been realized in the past fiscal year,” says Amr Talaat, Minister of Communications and Information Technology. “We’re eager to sustain our contribution to GDP at 4 percent and then grow to 5 percent and beyond in the coming years.” Remarkably, ICT investments in the country soared by 38 percent to $21.8bn in the 2017-2018 fiscal year. The minister adds that the government plans to achieve this by attracting ICT companies to expand in Egypt and participate in the implementation of Egypt’s digital transformation strategy.

The Ministry of Communications and Information Technology (MCIT) recently signed MoUs with a number of global technology innovators to develop the local skill base in order to support the country’s digital transformation program currently being implemented. A mindset shift is underway in Egypt, with plans to create 100,000 ICT job opportunities by 2022 in fields such as software development, cyber security, artificial intelligence and blockchain.

While the impact upon Egypt’s GDP of this digital transformation is impressive, the government doesn’t want to stop there. Instead, it aims to position itself as Africa’s digital hub. At the Cairo ICT Forum in November last year, President Abdel Fattah El-Sisi launched the Africa Games and Digital Applications Initiative, which will see the creation of 100 Egyptian-African start-ups and provide training for 10,000 young people across the continent to develop mobile applications and digital games to meet the needs of the Arab and African markets.

It is interesting to shed light on examples of companies with solid investments in Egypt, such as: Uber, with its second largest center of excellence in Egypt; IBM’s six delivery centers serving the entire globe; Dell Technologies center of excellence providing IT and business process services in 14 languages; and Microsoft Egypt’s Advanced Technology Lab (ATL) which works on many exciting services and research areas like speech processing, machine learning, and computer vision, which contributed to building Microsoft flagship products and cloud services. Additionally, Mentor Graphics’ R&D Center in Egypt is one of its biggest centers outside USA; Vodafone has its center of excellence for the Group’s artificial intelligence and robotic process automation (RPA) activities in Egypt; and Valeo Egypt has evolved to be Valeo’s main software R&D center, providing all services in the field of automotive embedded software.

In business process outsourcing (BPO), too, the country is rising in prominence. Ideally situated in the GMT+2 time zone, it can serve the U.S., Europe and Asia. The world’s major subsea telecommunications cables run along the north coast of the country, ensuring always-on connectivity. The resource pool of competitive labor stands out with its global competency standards and competitive cost. Egypt poses a large English and French-speaking population, supported by other languages including German, Italian, Spanish, Greek and Portuguese. Today, the number of global technology firms seeking Egypt as a destination of choice to offer their global delivery services is on the rise.

Egypt is turning its sights to digital transformation in order to drive forward its economy, starting with government services. “This will create a collaborative environment among the government itself that will contribute towards a more active and stronger ICT industry in Egypt,” says Minister Talaat.

The digital transformation program includes offering up to 25 digital public services in its first phase. This includes notarization, renewing driving licenses, and utilities and electricity bills. Alongside that, the government is technologically advancing its various agencies to provide better citizen services, while an aggressive plan is underway to integrate members of our society in the mainstream formal economy.

“We’re working in collaboration with the Central Bank of Egypt and other government entities to leap forward en route to financial inclusion,” says the minister. “A unique initiative we’re working on is a unified card for citizens to receive all their government entitlements such as salaries, pensions or subsidies. The card is tied to either a bank or an Egypt Post account. When this initiative is completed, 20 million citizens will be banked. We’re also working aggressively on encouraging our citizens to use mobile money and mobile wallets and enrich the portfolio of services offered. We’re collaborating with the Central Bank of Egypt to offer  microfinancing through mobile applications. All these initiatives help in moving towards a ‘less-cash’ society.”

The private sector has lauded the government’s progress. Ahmed El Beheiry, Former CEO of Telecom Egypt, says: “Digital technology has been on the table since the early 2000s, but people were talking about digital transformation of technological entities inside each organization. Today, the digital transformation is beyond that.” Notably, President El Sisi has mandated the reform of the education sector as a top national priority. Mr. Beheiry shares Telecom Egypt’s role as a major contributor to the reform project, extending fiber infrastructure to 2,550 schools nationwide.

“The Egyptian market is extremely promising,” says Minister Talaat. “Our ability to attract foreign investments in ICT remains strong and we are aiming to strengthen it further. This ability stems from the young, vital, vibrant, eager people ready to learn and make a future for themselves. We’re looking to create an internationally competent talent pool of young technology savvy professionals specialized in advanced technologies in order to cater to the demand of ICT firms with promising expansion plans.”