Article - October 25, 2011
“Cameroon is a Commonwealth country, and we believe in the same values: values like democracy, good governance and human rights” Henry Bellingham, UK ‘Minister for Africa’ 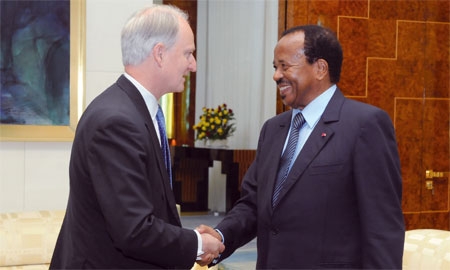 Trade, not aid, as the best way to alleviate poverty and spur socio-economic development is a firmly held belief in Cameroon. As a result, the Government is going to great lengths to expand economic relations beyond the nation’s borders and forging links with countries interested in its natural resources, which include oil, timber, metals, diamonds and arable land.

Cameroon’s connections with resource-hungry China in particular have been gaining in strength over recent years, with the Chinese Government set to continue financing in Cameroon’s infrastructure.

The United States, which currently provides assistance to Cameroon’s military in improving maritime security in the Gulf of Guinea, and the UK have both expressed their interest in investing more in the country and boosting two-way commercial links with the “hinge of Africa”.

“We are pushing very hard to promote free trade within Africa and to secure generous trade access to EU markets, including agricultural imports,” says Henry Bellingham, Parliamentary Under Secretary of State at the Foreign and Commonwealth Office, also referred to as the UK’s Minister for Africa.

In July, Mr Bellingham became the first British Minister to visit Cameroon for over eight years. During his visit, the Minister discussed a wide range of issues with President Paul Biya, including the on-going events in Libya, the development of the African Union, climate change, Cameroon’s upcoming general elections and UK-Cameroon commercial links. “I believe it is time to have a new chapter between the UK and Cameroon,” says Mr Bellingham. “Cameroon is an important country in the region and we share a very mature relationship. Cameroon is a Commonwealth country and we believe in the same values: values like democracy, good governance and human rights.”

The UK Minister highlights areas such as agriculture, hydrocarbons, energy provision, mining and language training as big commercial opportunities for the UK.

“We also want Cameroon to export to the UK. Africa has just 1.8 per cent of world trade and that is not good enough.” he adds.

The visit was also an opportunity for the Minister to meet with key UK businesses already flourishing in the country and transferring skills and knowledge to local Cameroonian workers, such as Rodeo Development Limited – one of the UK’s latest investments in Cameroon, which is specialised in the production of industrial gas.

“The UK is passionate about increasing trade with Cameroon,” says Mr Bellingham. “We already have a number of world-class UK companies that are doing business here in Cameroon. But more business needs to come here; not just to sell their goods, but to invest their skills in the people of this country.”

Cameroon’s links with the United Nations are also set to be intensified, especially on the topic of climate change. The UK Government has pledged greater assistance in the forestry sector and sustainable forest management, which is a matter of great concern to the two countries.

In June, the World Bank pledged more large-scale projects in Cameroon. Gregor Binket, the World Bank’s country director for Cameroon, Central African Republic, Equatorial Guinea and Gabon, revealed that in addition to World Bank-sponsored schemes already under way, other major projects on a regional scale would soon see the light of day. Mr Binket paid a courtesy visit to Minister of Finance Essimi Menye, during which both men reviewed cooperation ties between Cameroon and the World Bank. They also explored sectors where the World Bank can assist the Government of Cameroon to make its economy more competitive, in addition to a special focus on how the agricultural sector can be enhanced as a profession in order to create jobs for the nation’s youth.

Partnerships with China – a model for Africa

President Paul Biya and First Lady Chantal Biya were received with state honours at the Great People’s Palace in Beijing on 20 July, 2011, by Chinese President Hu Jintao and his wife Liu Yongqing at the start of a three-day visit to China. Speaking to delegates after the initial welcoming ceremony, President Biya affirmed that 40 years of friendship and cooperation between China and Cameroon have helped form very close ties. The two leaders and their accompanying delegations discussed how to reinforce bilateral collaborations and further cement Sino-Cameroonian links. By the end of the day, a total of seven new agreements dealing witheconomic and technical alliances between the two countries had been signed. President Biya later referred to relations between the two nations as exemplary, and a model for the African continent.