With the landmark expansion of the iconic Panama Canal under way, leaders of the diverse and vibrant economy have their say on the country’s remarkable growth story, its vast investment opportunities and how the government of President Juan Carlos Varela is setting out to polish Panama’s international reputation 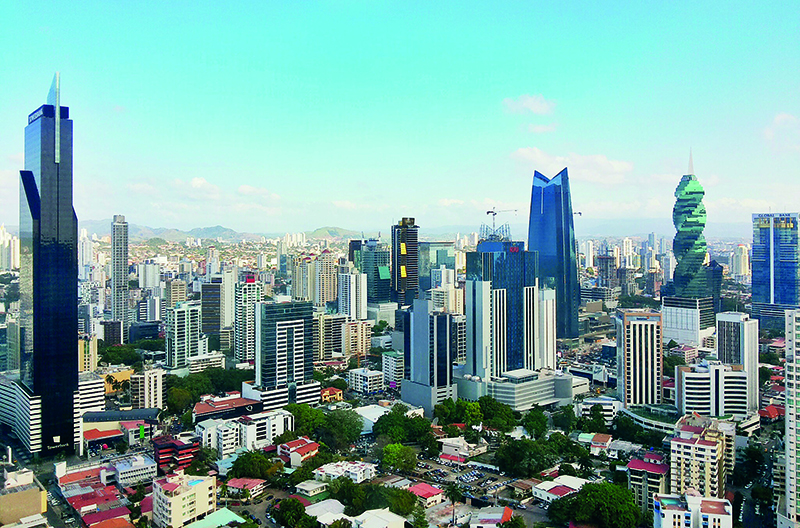 With a strategic location nestled between the two Americas, top-class infrastructure, and a position as a global financial center, Panama is today a bona fide hub of international commerce. Looking to position themselves in one of the world’s most important logistics centers, many multinationals have established their headquarters in the country over recent years, and many more are soon expected to arrive. Panama’s booming economy is set to grow around 7% annually for the next five years while the Panama Canal’s massive expansion project lures further companies interested in servicing trade between Asia, the U.S. and Europe.

It was the opening of the Panama Canal in 1914 that set this diminutive country on its way to becoming the global logistics giant it is today. A century on, the 14,000 vessels that pass through the Canal each year (carrying 200 million tons of cargo) make up roughly 6% of the world’s trade; an astonishing figure for a tiny isthmus in Central America. With its $6 billion expansion set for completion in early 2016 – allowing the waterway connecting the Pacific and Atlantic oceans to accommodate modern super-sized ships and effectively double the amount of traffic – Panama’s business standing is only about to improve.

“We are blessed to have the Canal, a major piece of infrastructure which serves our nation, and world trade,” proclaimed Panamanian President Juan Carlos Varela in his inauguration speech after being elected in May last year. Indeed, the country’s natural geographic advantages – and the resulting success of the Canal – have been largely defining factors in how Panama has set itself apart in the region.

“Other countries have had to work hard to carve their niche, whilst the Panamanian niche was carved by God himself,” says Alberto Vallarino, President of Grupo Verdeazul, a leading Panamanian investment company. “We are right in the middle of the American continent, not only in regards to north and south, but also east and west. A great deal of Panama’s success is due to this…no other city or country in this hemisphere has this cluster of advantages.”

With the Canal the bedrock of its economy, Panama has consistently been one of the fastest-growing countries in Latin America over the past decade, as well as one of the world’s most stable economies at times of widespread global uncertainty. However, Panama has become much more than just a connection point. Large-scale investment in transportation facilities and infrastructure development has allowed the country to diversify, not only leading to high growth, but also becoming one of the few Central American economies that are predominantly services-based; with significant value addition locally.

“The past 10 years’ growth has been caused by Panama’s great economic diversity,” says Ramón Roux, General Director of CBRE Panama, the local arm of the multinational, American-owned commercial real estate company. “Panama has around eight or nine industries and none of them represents more than 13%.”

Such diversification has allowed investment companies like Grupo Verdeazul – whose varied portfolio covers a wide spectrum of the economy, such as real estate, hospitality, agriculture, and mining – to thrive.

The real estate sector in particular has been a top driver of Panama’s remarkable growth story.

“If we are going to examine Panama’s economic growth and also where the country is leading to, we need to take a look at the past eight or nine years,” explains President of construction specialists Cotrans S.A, Luis Campana. “During this last period of time there has been major development in diverse sectors, especially construction and transportation. All of this occurred due to the real estate boom that has been taking place in Panama.”

Increasing numbers from the U.S., Europe and Latin America are drawn to Panama City (known as the Miami of Latin America) by employment and investment opportunities provided by a country with renowned political and economic stability – including the benefits of having the U.S. dollar as its local currency. Consequently, more and more property pops up, with developments such as hotels, resorts and malls on the rise as businesses look to cash in on the country’s fast-expanding tourism sector and growing middle-class population.

The country has additionally made massive strides in the housing market. “Right now Panama has the best housing rate in Latin America, which demonstrates the effectiveness of the different policies and initiatives aimed to reduce the housing deficit,” says CRBE’s Mr. Roux. “The country has been permanently creating incentives for the development of housing projects in the poorest sectors.”

However, if Panama is to continue growing at the rapid pace that it has set and serve its population and booming industries more effectively, much greater levels of investment in infrastructure will be needed, says Mr. Campana of Cotrans S.A.

“We need infrastructure projects in order to sustain all this economic development,” he explains. “More roads and specific transport solutions besides everything related to electricity and water supply; that is to say, all the basic infrastructure systems required by any developing country.”

To this end, the new government of President Varela will pick up the reins left from Panama’s previous administration, which invested nearly $15 billion in improvements including new airports, Central America’s first metro system that opened in April 2014, and significant upgrades to water and sanitation systems. President Varela has pledged to continue aggressive investment in infrastructure, having announced a further $30 billion worth of projects last September with the construction of two major highways and the commencement of phase two of the historic metro system, adding 16 new stations.

Aside from improved transport networks, Panama’s growing economy will also require major investment in electricity generation and transmission capacity as the country’s energy demand grows annually at a rate of 5%. This means that over the next decade an estimated 500 MW of extra electricity will be required. With nearly 100 projects currently being planned in the area of energy generation, the sector is vital to the future of the country.

AES – Panama’s largest electricity firm and Central America’s largest private hydroelectric generator – is a company that has notably contributed to Panama’s energy development, increasing its installed capacity by 150% in order to provide the most competitive energy prices in the national market. While AES has already done much to increase Panama’s reliable and sustainable power supply, General Manager Miguel Bolinaga says that Panama should do more to diversify its energy mix.

“Panama’s energy matrix compared to other countries is still very weak,” he explains. “It currently depends on water by 60% and fossil fuels by 38%. The rest is generated by wind.”

He continues: “Our energy should be at least four strong fuels. It is essential that the government is convinced that the energy mix should change in the next five years. I believe very much in renewable energy.”

Indeed one area that has been largely unexplored in Panama is the use of geothermal energy, and in terms of other sustainable sources of power, several wind plants are planned while there are also opportunities in developing solar and biomass energies.

Yet what Panama will truly need going forward to turn its tantalizing potential into tangible power resources, as well as in continuing the development of other industries across the economy, is greater foreign direct investment (FDI). To a large extent, Panama is already a leader in that regard. For the fifth year in a row in 2014, Panama received more FDI than any other country in the region. What’s more, according to the forecasts of the Ministry of Economy and Finance, the inflow of FDI to Panama will be nearly $5 billion in 2015 – no small sum.

An international banking center works on its image

Nevertheless, with an economy dependent on foreign investment and a government and business environment that had been hampered by corruption scandals, President Varela – whose election campaign was based on a pledge to fight corruption and ensure transparency – has set about on his promise by vigorously pursuing high profile investigations into fraud as well as recently appointing an executive of global transparency guardian, Transparency International, as head of his anti-corruption agency.

With such measures, President Varela hopes to reassure foreign business over the country’s investment climate and guarantee that Panama’s impressive record of FDI continues – and improves – under his watch.

“Our country offers unique features for international investors. We want the best to invest in Panama and that is why our Government has a serious commitment to generate a climate of investment based on transparency and clear rules of engagement,” stated President Varela on a visit to Spain last year.

This is a sentiment echoed by leaders of one of Panama’s biggest industries: the finance sector.  “In addition to investing in infrastructure, it is also crucial to keep on adapting the laws and regulations with the aim of gaining transparency and attracting foreign direct investment,” says Jorge Vallarino Strunz, Chief Financial Officer of Global Bank.

Today one of the country’s foremost banks with assets of over $1 billion, Global Bank is a direct product of the finance sector’s success story in Panama, which has established itself as the most successful international banking center in Latin America.

Despite its success, Panama and its finance industry has been struggling to shake off its reputation as a so-called tax haven. Last year the Organization of Economic Cooperation and Development (OECD) placed Panama back on its ‘Gray List’ of international tax havens, even though Panama had put significant efforts towards passing OECD recommended regulations and signed numerous double-taxation treaties.

Mr. Vallarino says that there is evidently more to be done. “It is very important that we continue to improve our regulations and to enhance our institutions so that we do not fall victim to money laundering activities. Even though we already have the legal framework to stop this kind of activity, we still need to do more in terms of enforcement.”

While many in Panama find the OECD’s decision unfair, considering the great progress the country has made over the past five years in improving transparency, the government has nevertheless begun making a raft of new measures to ensure the country can be retaken off the Gray List when it comes to the OECD’s next revision of the list.Eduardo Morgan, Chairman of the Board at Morgan & Morgan – one of the top law firms in Panama and Central America – says that for Panama to really grow to its potential, the country must now concentrate on improving its international image. “The way Panama is portrayed abroad is absolutely unfair,” he remarks. “Therefore we are working to raise awareness among our own population of what Panama truly is: a serious and responsible country. We need to recover Panama’s good name and communicate the country’s value.”